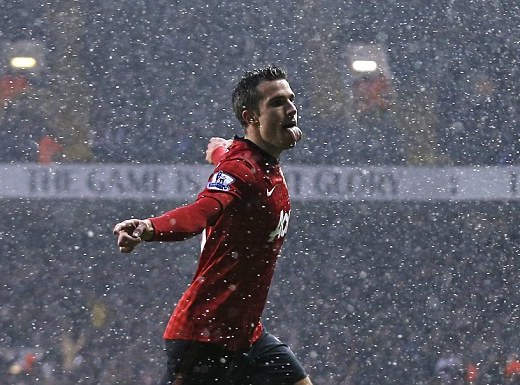 United were left heartbroken at White Hart Lane as Tottenham snatched a late equaliser just when it seemed the Reds had held out for a vital three points.

Only the league leaders' second draw of the season, it was sealed in agonising fashion so late in the game. Robin van Persie struck his 11th goal in as many games in the first half to put United in a commanding position as the clock ticked down on a hard-fought, entertaining but tense match. But Clint Dempsey struck, as the Reds so often do, in injury time with little time for a response.

In a fixture that often produces goals, it looked like being just van Persie’s first-half header – his 22nd goal of the season – that would narrowly separate the two teams. United endured a nervous second half as Tottenham searched for an equaliser. Spurs will feel that a point was a fair reflection of the balance of play, but for Sir Alex Ferguson and his players the overriding feelings are of frustration and disappointment having been so close to the win.

The snow blanketing London had initially cast doubt on the game going ahead, but referee Chris Foy gave the green light after a pitch inspection an hour before kick-off. Even so, there was a significant dusting of snow on the turf until the White Hart Lane groundstaff worked to have it clear for kick-off. Regardless of the conditions, United were always bound to be in for a tough afternoon with Spurs the only side in the top four to take points off the Reds this season. That 3-2 defeat at Old Trafford back in September remains a source of frustration.

United retained 10 of the 11 starters against Liverpool as Phil Jones replaced the injured Ashley Young and took up a central midfield role. Danny Welbeck and Shinji Kagawa both kept their places in the team, while Wayne Rooney took up a spot on the bench having made his return from injury in the midweek FA Cup replay win over West Ham.

Neither side took complete control early on as possession see-sawed and clear openings in front of goal were few; a glancing header from van Persie after ten minutes failed to trouble Tottenham keeper Hugo Lloris and at the other end the lively Aaron Lennon forced a parried save from David De Gea, who smothered a rebound effort from Defoe but he was offside. 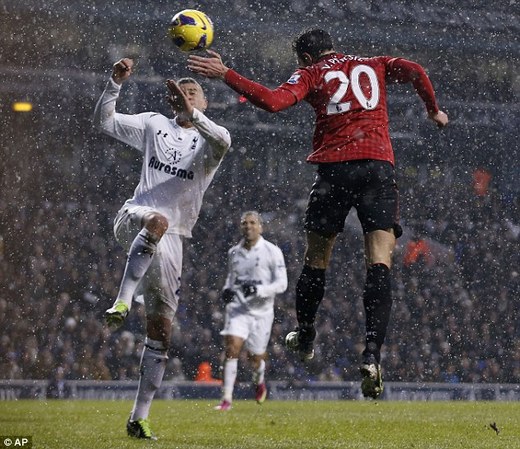 It was the home side, for whom Lennon was a constant threat, who looked like finding a foothold in the game just as United scored on 25 minutes. Welbeck neatly worked the ball out to Cleverley on the right and, with a delivery reminiscent of his idol David Beckham, the Reds midfielder crossed perfectly for van Persie to head home from a tight angle at the far post - the Dutchman’s 22nd goal of a remarkable debut season with United.

The goal galvanised the visitors for a strong finish to the half, but Tottenham too appeared incentivised and gave a reminder of the danger they pose five minutes before half time when De Gea had to improvise to save with his legs from Gareth Bale’s right-foot shot on the edge of the area. Andre Villas-Boas’ side then piled on the pressure in the second half; just 30 seconds after the restart Defoe engineered space for a shot but fired wide, then Bale curled a shot just over the bar, before Dempsey forced a world-class close-range save, again with his feet, from De Gea.

Tottenham looked lively and dangerous on the break while United’s use of the ball was not as sharp as it could have been. So it was a timely change to call on Wayne Rooney in place of Kagawa after an hour, and the Reds striker had been on the pitch seconds when he had a strong claim for a penalty turned down after tangling with Spurs defender Steven Caulker in the area. The substitution added a little more purpose to United’s play and for a while it put the Reds back on the front foot having been penned in the defensive third for much of the half. Yet United’s lead remained precarious and hearts were in mouths with a little over ten minutes left when Lennon surged forward from the halfway line and fed a pass to Defoe in the area. Just as the Spurs striker pulled the trigger, Rio Ferdinand intervened with a world-class piece of defending to block the shot. 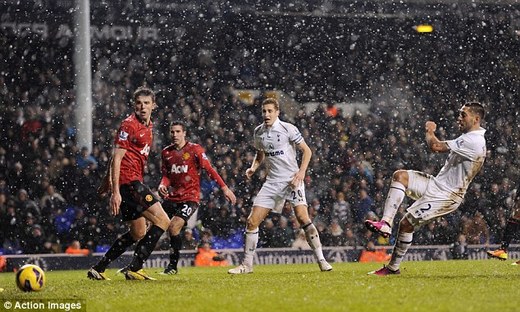 Ferdinand’s challenge had appeared to characterise a desire and determination from United to see out the game. It looked like being a job well done until the ball fell to Dempsey in the area and he levelled the scores with no time for a Red response. United still have a five-point advantage at the top of the league and, although a draw at White Hart Lane might ordinarily be considered positive, under the circumstances it feels like two points dropped rather than one gained.