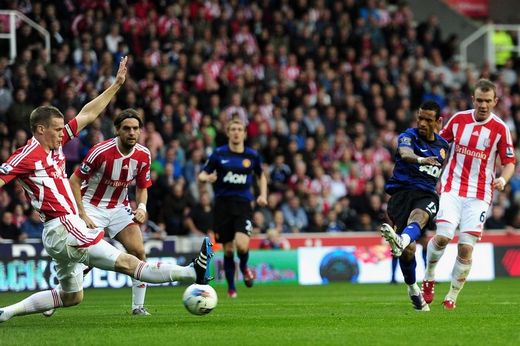 United's perfect start to the Barclays Premier League season shuddered to a halt as Stoke City pegged the champions back in a gritty draw at the Britannia Stadium.

Nani's superb first-half opener gave an injury-hit Reds side a lead which was preserved by heroics from David De Gea, before Peter Crouch levelled matters shortly after the interval with his first goal for the Potters.

United's cause was hardly helped by the loss of Jonny Evans and Javier Hernandez to injury, during the warm-up and in the third minute respectively, while referee Peter Walton twice ignored strong penalty claims from the visitors.

Sir Alex Ferguson's pre-match preparations were dealt an untimely blow when Wayne Rooney sustained a slight hamstring injury during Friday's training session, and the loss of Evans to a foot injury in the warm-up prompted further reshuffling, with Phil Jones alongside Rio Ferdinand at centre-back and Antonio Valencia in at right-back. Dimitar Berbatov replaced Rooney.

The champions were baying for a spot-kick in the third minute, when Darren Fletcher’s pass was deflected in behind the Stoke defence. Chicharito raced onto the loose ball and was bundled to the ground by Jonathan Woodgate. Although the defender made scarcely detectable contact with the ball, referee Peter Walton declined to award the penalty.

Sir Alex Ferguson’s ire was hardly soothed when Glenn Whelan flew into a challenge which sent Patrice Evra head over heels, although the official was quick to punish the midfielder with a yellow card. Chicharito, who had collided heavily with Potters goalkeeper Asmir Begovic after Woodgate’s challenge, had to limp from the fray and was replaced by Michael Owen.

By then, Phil Jones had come close with a header which Rory Delap hacked away from the Stoke goal, while the home defender’s long throws were proving a typically potent threat for the hosts. So too were Matthew Etherington’s corners, one of which was directed wide from close-range by Crouch, although play was halted for a foul on Jones.

United’s own prowess from set-pieces was illustrated when Berbatov escaped ex-Tottenham colleague Woodgate to reach Anderson’s in-swinging corner, but the Bulgarian could only direct his header comfortably wide.

The two sides postured without the deadlock seemingly under threat, until an act of brilliance from Nani shattered it. Just in from the right flank, the Portuguese sized up his options, swapped passes with Darren Fletcher, meandered into a packed penalty area and squeezed a low, left-footed shot underneath the challenge of Ryan Shawcross and just inside Begovic’s left-hand post.

United’s joy was almost immediately tempered as Stoke attacked from the restart. As the ball bobbled about the Reds’ area, Andy Wilkinson charged onto it and rocketed a drive goalwards, only for De Gea to instinctively fling up an arm and turn it onto the crossbar for a truly breathtaking save.

Less glorious was the next act of the Spaniard’s counterpart. Begovic was put on the spot by a poor back-pass from Glenn Whelan, and the stopper’s miscontrol, under pressure from Ashley Young, presented Nani with a gaping goal, but the Portuguese could only loft his shot off-target as Begovic hurtled towards him.

Stoke, to their credit, were unruffled by the close-call. After Delap had fizzed a long-range effort wide, De Gea was again prompted into making a stunning save; this time plunging to his right and turning Jonathan Walters' powerful effort past the post with his fingertips.

The remainder of the half offered few openings, with the exception of when Jones created his own; surging through the hosts’ midfield and rifling in a left-footed effort which deflected wide. The interval came and went, however, with United in possession of a slender lead.

In the fifth minute of the second period, Young came close to laying on a goal for Owen to secure some breathing room, but the winger’s cross was turned away from the striker by the attending Woodgate.

That close call soon proved costly, as Crouch hauled the hosts level with his first goal for the club. Etherington swung in a tantalising corner, and the onrushing striker stole between Ferdinand and Jones to power a header past De Gea.

Galvanised, and roared on by the renewed choral backing of the home support, Stoke should have moved ahead immediately afterwards. Ferdinand missed a lofted ball, leaving Crouch through on goal, but De Gea was off his line sharply to deflect the striker’s shot over the bar.

The pair’s rivalry resumed in the 65th minute, when a loose ball bobbled into the United area and between the two. Both led with their feet, De Gea reached the ball first and cleared the ball to safety. The Spaniard then beat away a ferocious free-kick from Marc Wilson, before United were denied a clear penalty.

A breakaway culminated in Young’s shot being parried out by Begovic. The winger headed the rebound across to Evra, whose goal-bound shot struck Shawcross’ raised arm inside the area. Again, no penalty.

Sir Alex swiftly responded by replacing Young and Berbatov with Ryan Giggs and Danny Welbeck. The former was soon in the thick of the action, sliding a ball across for Owen which Shawcross did brilliantly to clear for a corner.

But, at a time when United might have expected fatigue to siphon Stoke's energy reserves following their midweek Carling Cup epic against Tottenham, it was instead the hosts who finished stronger, and twice might have taken the spoils through Crouch.

The towering striker first directed a header wide from close-range, then horribly scuffed his shot past the near post after escaping Valencia's attentions. The clearest opening of the dying stages fell to Giggs, however, in injury-time. Nani's superb floated cross begged for a back-post conversion, but the veteran could only skew his close-range volley past the gaping goal.

Defeat would have been harsh on either side, and both can reflect on a hard-earned share of the spoils. Stoke may well celebrate their first Premier League point taken at United's expense, but Sir Alex's men will be far from dissatisfied with taking tangible reward from one of the most inhospitable away fixtures of the season.

David De Gea
Outstanding work from the Spaniard. Produced two top class saves in the first period to preserve United's lead and, although he couldn't stop Crouch's leveller, shone late on to secure a point.

Antonio Valencia
Enjoyed a steady afternoon after his last-minute deployment at right-back, and only at the end of the game was his positional naivity exploited by Crouch. Nevertheless, fine moonlighting.

Phil Jones
Another lively showing from the versatile youngster, who did well defensively and marauded forward at every single opportunity.

Rio Ferdinand
His cool head and experience were vital in a reshuffled defence, and he looked unflappable for long periods - bar the second-half misjudgement which De Gea rescued.

Patrice Evra
Came in for a physical battering but held his own, and added real menace to United's left flank with several lung-busting raids into Stoke territory.

Nani
Enjoyed his running battle with Marc Wilson and Matthew Etherington, whose doubling up couldn't prevent the Portuguese from shining once more. A fine goal and a great cross which deserved conversion by Giggs.

Darren Fletcher
The Scot is getting better by the game and looks more like his terrier-like self. Another breathless display of harrying without the ball and neat retention with it.

Anderson
Busy and lively as ever, but a quieter afternoon for the Brazilian amid a game in which midfield finesse was often redundant.

Ashley Young
The winger was fairly quiet in the first period, but looked far more energetic after the break, troubling Andy Wilkinson and forcing a strong save from Begovic.

Javier Hernandez
Given no opportunity to shine, after suffering a dead leg in his controversial early collision with Woodgate and Begovic.

Dimitar Berbatov
An oasis of calm amid the hubbub. Never given an opening to chance his arm, but linked play in attack before his second-half withdrawal.

Michael Owen (on for Hernandez)
Unable to reprise his midweek heroics against a well-drilled home defence, but showed some neat touches and showcased his ever-impressive movement.

Ryan Giggs (on for Young)
Made a difference after entering the fray. Sent in a fine cross which almost reached Owen, but will have nightmares about the late volleyed chance which he skewed wide.

Danny Welbeck (on for Berbatov)
Good to see him back in Premier League action after his hamstring strain. Showed crisp passing and neat touches but was unable to forge a telling opening.