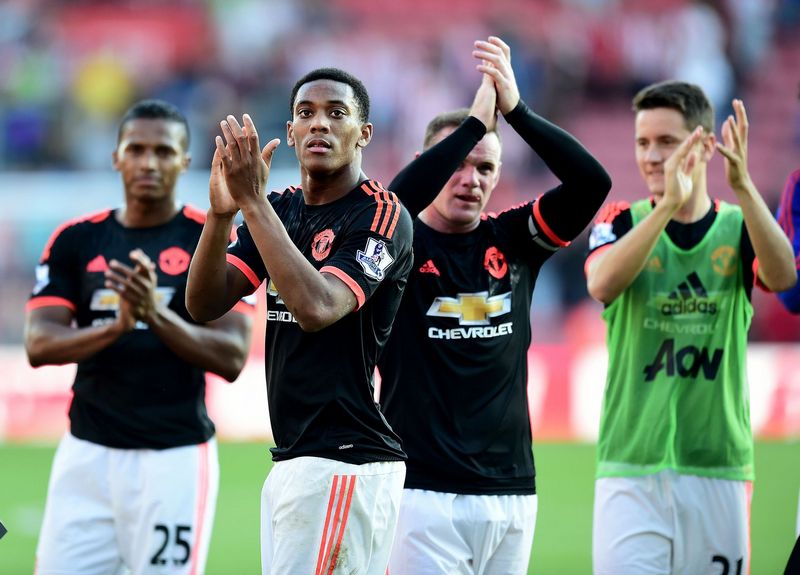 Anthony Martial enhanced his burgeoning reputation by scoring twice in a 3-2 win over Southampton that moves Manchester United up to second in the Barclays Premier League.
The French summer signing executed two impressively composed finishes either side of the half-time break to overturn Graziano Pelle’s opener at St Mary’s. Juan Mata enhanced the lead and Italian striker Pelle bagged his second to set up a tense finale, though the Reds held on to claim an excellent result that closes the gap on leaders Manchester City to just two points following their home defeat to West Ham.
Luke Shaw was unavailable to play against his former club after breaking his leg at PSV Eindhoven and Louis van Gaal selected Marcos Rojo to fill in at left-back, allowing Daley Blind and Chris Smalling to maintain their promising partnership in the middle. Wayne Rooney and Morgan Schneiderlin were recalled to the starting XI, with Martial also making his first Premier League start.
The match began at an even pace with both teams enjoying separate spells of possession in midfield, although it was the hosts who broke the deadlock in the 13th minute when Pelle pounced on David De Gea’s parried save from a Sadio Mane effort to shoot underneath the Spanish goalkeeper. The towering Italian, who scored in this fixture last season, then hit the outside of the post with a low shot just moments later that prompted a visibly angry De Gea to berate his defenders.
Memphis saw a looping header arc over Maarten Stekelenburg’s crossbar on 24 minutes as United – wearing the black adidas third kit – attempted to restore parity on the south coast. But it was far from easy against a home side that was defending with all 11 men behind the ball, while pressing high up the pitch with an intensity that has earned plenty of praise during Ronald Koeman’s reign as boss. 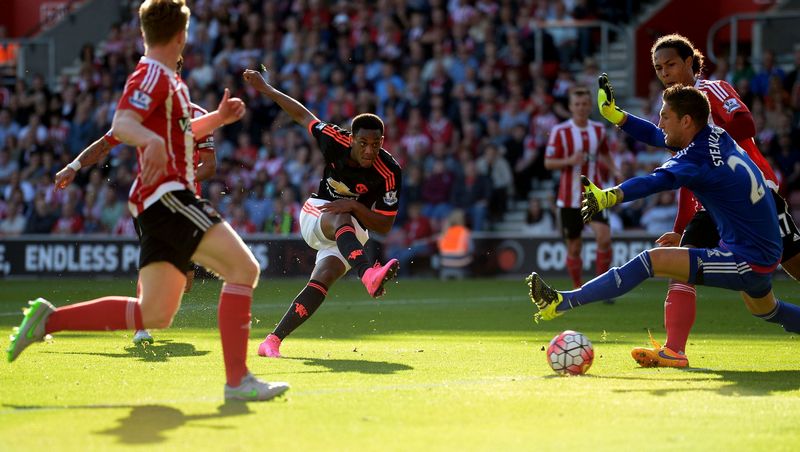 Thankfully, van Gaal’s men broke through the mass ranks to equalise in the 34th minute and it was our new no.9, Martial, who did the honours, receiving the ball on the edge of the six-yard area before showing impressive composure to execute a low finish past Stekelenburg.
United almost took an unexpected lead prior to the half-time break when Memphis intelligently played in Mata from a corner kick, with the Spaniard then slipping another pass inside for Blind to shoot wide from close-range, wrapping up an intriguing and entertaining opening 45 minutes at St Mary’s.

Possession: Southampton 37% United 63%
Shots at goal: Southampton 8 United 4
Shots on target: Southampton 3 United 1
Corners: Southampton 2 United 3
The second half began with both managers making tactical changes as Matt Targett replaced Cuco Martina and Antonio Valencia usurped Matteo Darmian, although Martial picked up exactly where he left off by scoring his second goal of the game on 50 minutes. This time, the 19-year-old livewire latched onto a sloppy backpass from Saints defender Maya Yoshida to execute another cool finish to inspire repeated chants of “Oh Anthony Martial” from United’s ecstatic travelling fans. 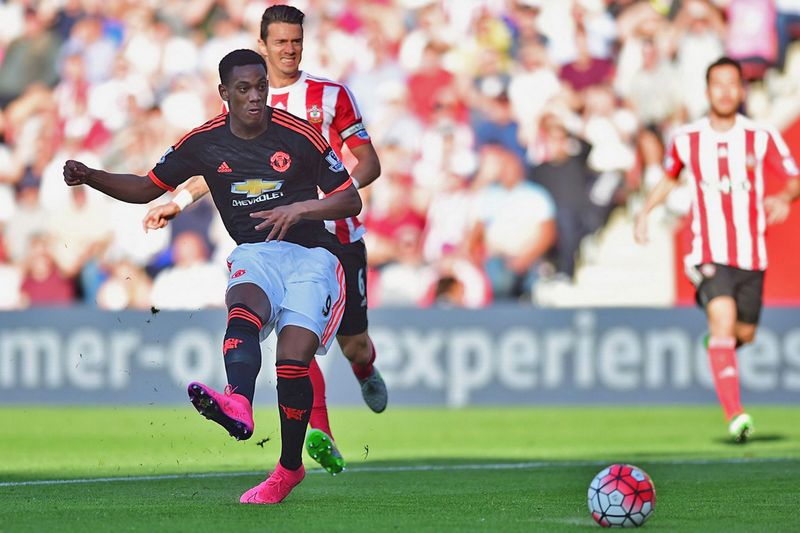 The away end was quickly singing the name of De Gea as well after the Player of the Year produced an astounding one-handed save to claw Jose Fonte’s off the line ahead of the hour mark, when van Gaal made his second substitution by introducing Bastian Schweinsteiger for Michael Carrick.
Southampton appeared to tire as the clock ticked on and United took full advantage as Memphis struck the post with a powerful effort that bounced back into the direction of Mata, who guided a neat finish into the bottom corner to bag his second goal of the season following his first at Swansea City. 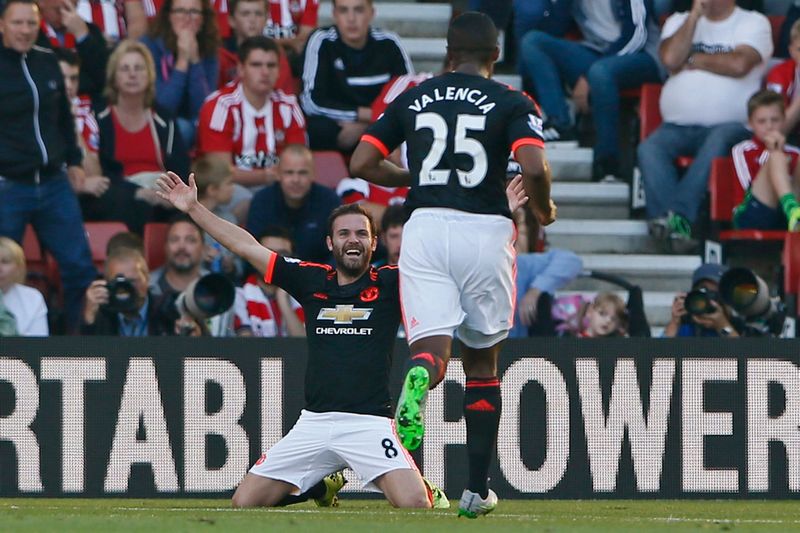 Although United appeared in complete control in the final stages of Sunday’s match, as several Southampton players went down to ground with cramp, the hosts did manage to hit back and set up a tense finale as Pelle rose admirably to head Mane’s cross past a helpless De Gea.
The Spanish no.1 was then required to produce another acrobatic save to repel Victor Wanyama's long-range effort, as van Gaal’s Reds kept their calm to secure an important victory that provides a welcomed confidence boost ahead of Tuesday’s Capital One Cup clash with Ipswich Town. 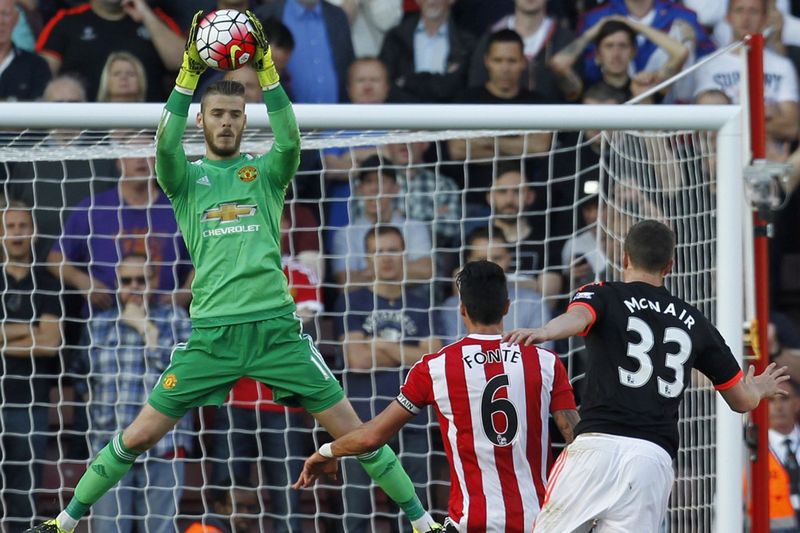 Martial was voted Man of the Match by United fans on Twitter, with 50% of the votes in @ManUtd's poll going to the Frenchman. He beat the equally impressive David De Gea (45%), who made a string of fine saves to preserve the Reds' lead. While Schneiderlin completed the voting with 5%.

Louis van Gaal: "It's a fantastic result away at Southampton and I think we have made a statement that we shall compete for the title."

Morgan Schneiderlin: "Anthony is a very intelligent guy, very calm. Today he showed great composure and great skill and power. He will be a great player for the future of Manchester United."

Juan Mata: "We are very sorry for Luke [Shaw]. Obviously what happened to him was very unlucky but he knows we are all with him and this victory is for him."

Anthony Martial enhanced his burgeoning reputation by scoring twice in a 3-2 win over Southampton that moves #MUFC up to second in the Barclays Premier League.