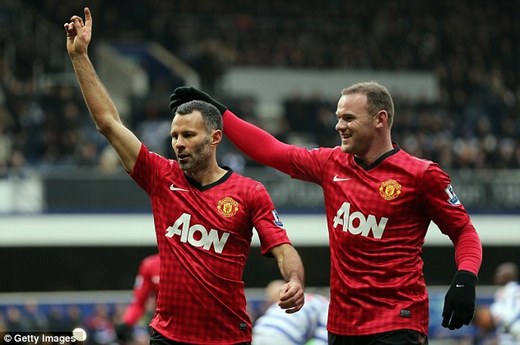 A stunning Rafael goal and Ryan Giggs' late effort saw off QPR and sent Manchester United 15 points clear at the top of the Barclays Premier League.

Rafael fired a superb arrowing 20-yard drive past home goalkeeper Julio Cesar midway through the first half to give the Reds the lead at Loftus Road.

The only downside of the afternoon was an injury to Robin van Persie, who was forced off before the break after sustaining a hip problem in the build-up to Rafael’s goal.

Nevertheless, Sir Alex Ferguson will be pleased to come away with the win after a spirited and feisty display from the league’s bottom side, who had previously taken home points off Manchester City, Chelsea and Tottenham.

Van Persie had started up front with Javier Hernandez as Sir Alex made seven changes to the side that beat Reading in the FA Cup. Wayne Rooney was named on the bench following his sinus infection, while Nani started after his decisive cup cameo against Reading five days earlier. Former Reds winger Ji-sung Park was among the home side’s substitutes.

QPR started brightly and with a clear aim to hurry the Reds in possession on a cold afternoon in west London. On an uneven playing surface, the game took a while to settle but United created a first chance in the 12th minute as Nani found himself unmarked in the box, only to direct a tame header wide from Ashley Young’s cross.

Hernandez then twice went close in quick succession, firstly seeing his header well tipped over by Cesar before being inches away from connecting with Nani’s low cross.

For all their endeavour, Rangers were struggling to keep possession or fashion any chances themselves and it was not a huge surprise when they fell behind. 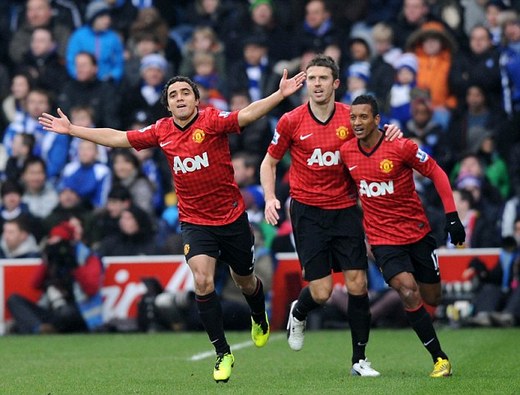 Van Persie battled his way to the byline and his drilled cross was palmed away by Cesar as far as Rafael, who hit an unstoppable, first-time drive that flew into the keeper’s top right corner. A Goal of the Season contender, without question.

Meanwhile, van Persie had picked up a hip injury after tripping over a cameraman just beyond the byline. The Reds’ top scorer looked set to be replaced immediately, but continued playing after consulting the bench.

The goal sparked the game into life and QPR created their first real opportunity 10 minutes before the break when Chris Samba’s header was cleared off the line by Rafael.

The Reds’ right-back promptly hared down the wing as United broke and delivered a wonderful long ball into the path of van Persie, whose controlled left-foot volley was just tipped wide by Cesar. That proved to be the Dutchman’s last contribution as he left the field gingerly, replaced by Danny Welbeck.

In the 40th minute, Nemanja Vidic came within a whisker of doubling the visitors’ lead with a glancing header from Giggs’ free-kick on the right side.

Harry Redknapp replaced Estaban Granero with Jermaine Jenas at half-time but United were on the front foot from the off in the second period.

Nani’s header forced Cesar into action again, before Vidic, enjoying a physical battle with Samba at both ends of the pitch, narrowly failed to connect with a Giggs free-kick.

Rooney entered the fray on the hour mark in place of Hernandez, while Rangers brought on Loic Remy for Bobby Zamora, who also appeared to have picked up a knock.

Former Marseille striker Remy made an instant impact, creating space for himself in the box and drawing David De Gea into his first save. But it was a rare opening for the hosts.

The Reds made another substitution with 20 minutes left as Antonio Valencia came on for Young, with Nani switching to the left flank. Junior Hoilett replaced Andros Townsend as Rangers sought a way back into the game but it was United who looked more likely to score again, with Rooney and Welbeck both seeing shots blocked inside the box. And the second goal did arrive with 10 minutes left, Giggs running onto Nani’s slide-rule pass to blast home his fifth goal of the season from a tight angle. Giggs, in his 999th competitive appearance at club and international level, almost added a second when his looped shot bounced off the bar, as United threatened to cut loose.

Welbeck had another chance to extend United’s lead but was tackled in the box after taking too long on the ball, before De Gea saved again from Samba, now playing up front.

United toughed this one out, make no mistake, and if the Reds go on to regain the title, this may well be regarded as a pivotal three points in the run-in.