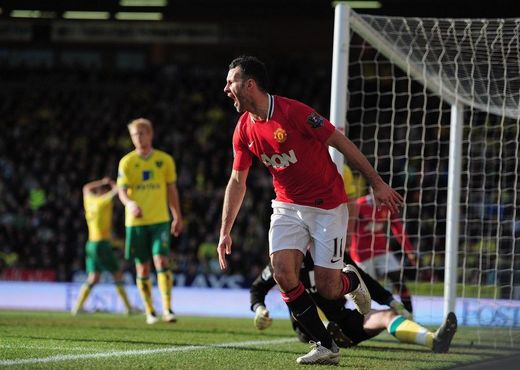 United's title bid was dramatically put back on track by Ryan Giggs' late winner in stoppage time at Carrow Road.

Paul Scholes had threatened to steal the headlines from Giggs on the Welshman's 900th appearance by heading home an early opener that, for so long, looked like being the only goal of the match. Norwich were not killed off and, instead, maintained a foothold in the game when Grant Holt equalised with only seven minutes remaining.

But Giggs had the final say in the dying seconds when tucking home an Ashley Young cross to cap a remarkable spell of pressure after Danny Welbeck looked to have twice passed up the opportunity to take the points.

Giggs flicked over from a Phil Jones cross with six minutes gone and, while that would have been a fairytale start, a goal was still forthcoming a minute later. A steady build-up did not appear to carry too much threat but there was a real sting in the tail when Nani whipped in a teasing cross from the right. Javier Hernandez and Welbeck were unable to get a touch but Scholes arrived on cue to give his nod of approval to the inviting centre.

A splendid move almost brought a second on 16 minutes when Nani and Hernandez ferried the ball to Welbeck but the striker's goalbound shot was expertly tipped away by Ruddy's fingertips with the keeper at full stretch. But Norwich retaliated, with David De Gea matching Ruddy's excellence with a vital block with his right boot to deny Anthony Pilkington, who beat Patrice Evra to advance onto a fine pass by Kyle Naughton.

Hernandez was unable to get any power on his shot after receiving a pass from Welbeck, with Ruddy saving comfortably, but De Gea was arguably busier than his opposite number in the first half. Pilkington's cross was met by a deft header by Holt but the Spanish keeper was equal to it, not only reaching the effort but clutching it safely.

United were not in top gear throughout the opening 45 minutes but looked dangerous when knitting moves together as Scholes and Michael Carrick tried to get a grip in midfield. After the restart, the Reds asserted more control but there were few chances created.

Bradley Johnson drilled wide following a stray pass out of defence by Evra and Andrew Surman had a volley blocked but the champions' defence looked comfortable. United burst into life with another lovely move as Welbeck played a one-two with Giggs but his lob past Ruddy did not carry enough pace on it and Zak Whitbread was able to clear.

De Gea had to be alert to make a spectacular diving catch to cut out a Pilkington centre but Sir Alex's side conjured up another moment of inspiration when Phil Jones' cross was volleyed against the bar by Giggs, who was so close to marking his special day with a goal.

Nevertheless, the Canaries remained in the game and, after a hopeful penalty shout against Scholes, Holt headed off target when left unmarked inside the area. Evra then blocked a Wes Hoolahan cross at point-blank range and escaped more penalty appeals from the home upporters.

It then took a superb save from De Gea, who pushed away an Aaron Wilbraham drive after the substitute was gifted possession by a rare sloppy pass by Scholes, to keep United level but an equaliser had been on the cards when, seconds later, Holt was allowed to turn despite the close attention of three defenders and lash home after Whitbread's header fell to him.

You could almost hear the cheers from the blue half of Manchester. However, the champions mustered a spirited response with Carrick finding plenty of space and opting to pass to Young, whose shot was blocked by Naughton, before Welbeck was guilty of a bad miss when Giggs picked him out, failing to get a touch with his intended header.

Welbeck could only fire against Ruddy's legs during a frantic finale and Elliot Ward almost put through his own net. But Norwich's resistance was ended when Young provided a telling cross and Giggs was in the right place at the right time to make it a dream day for the veteran midfielder.

David De Gea
A truly accomplished display from the Spaniard, who was flawless from the first whistle. Tested early on by a muscular challenge by Grant Holt, he caught a number of crosses. There were vital saves, too, as he denied Anthony Pilkington with his foot and made diving stops to thwart Grant Holt and Aaron Wilbraham.

Phil Jones
Capable of supplying teasing crosses from the right, he picked out Ryan Giggs twice for openings - one that the veteran smacked against the bar. Also defended with style and steel, it could be argued that the versatile performer's best position at present is at right-back.

Jonny Evans
Showed great composure when placed under pressure by Holt and was unflappable throughout. Harshly booked for a foul on Wes Hoolahan, when the substitute had clearly handled the ball, he won countless challenges and glided forward to start attacks.

Rio Ferdinand
Made important headers away from the danger zone in the first half and cleared following a muddle inside the box from a David Fox free-kick. After his rest in midweek, put in a tireless shift and continues to look every inch a top-quality centre-back.

Patrice Evra
Although he managed to get forward to provide a couple of driving runs, he was largely kept on the back foot by Anthony Pilkington and the winger escaped his attentions to fire against De Gea's foot in the first period. One burst into Norwich territory set up a chance for Danny Welbeck in the second half while one diving header to Paul Scholes showed his commitment to the cause.

Nani
Started the match full of confidence, displaying superb skill and juggling the ball on a couple of occasions. After his inviting centre was converted by Scholes, he was felled by a crude challenge by Bradley Johnson and appeared to take some time to regain his swagger. Was certainly asked to provide an outlet in the second half and continued to make in-roads down the right.

Michael Carrick
A couple of sweeping passes out to the right early on proved he'd found his range and he was also composed when helping out in defence. Almost played in Ryan Giggs with an intelligent through ball and teed up Ashley Young for a late chance when he must've been tempted to go for goal himself.

Paul Scholes
An outstanding display from the veteran, capped by the opening goal as he headed in from close range. A body swerve that deceived Hoolahan was another highlight and there was a trademark chest back to De Gea in a midfield masterclass. One stray pass allowed a shot on United's goal but it was only a blip as he was clearly one of the best players on the pitch.

Ryan Giggs
It's almost as if this was scripted. A flick over in the opening stages would have been a dream start and he was unlucky to volley against the bar in the second half but he was merely saving his best for last. A fluid, measured performance was punctuated by the injury-time finish that he celebrated as wildly as any Red, realising the importance of his latest priceless contribution at the end of his 900th appearance.

Danny Welbeck
A hard-working display full of pace and penetration but he will have been relieved to see Giggs come up trumps after missing a header from his experienced team-mate's cross with time running out. The England international also forced a couple of superb saves out of John Ruddy, one in each half, and, when he did beat the keeper, Zak Whitbread cleared.

Javier Hernandez
Set up an opportunity for strike-partner Welbeck and had a shot saved himself when unable to get the required power behind it. Substituted for Ashley Young after failing to get the clear run on goal he'd craved.

Ashley Young (for Hernandez, 63m)
A nice ball to Evra was an instant impression on his introduction to the game but, after having a shot blocked, it was his centre that led to Giggs' dramatic goal.

Chris Smalling (for Giggs, 93m)
Came on to help run down the clock after the late winner.