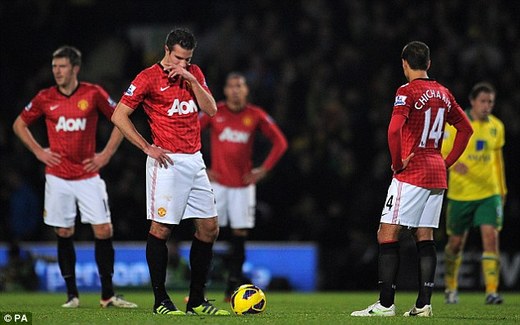 Manchester United slipped to second spot in the Barclays Premier League after losing to Norwich City in an insipid encounter at Carrow Road.

Anthony Pilkington's header just before the hour mark was the outstanding moment of quality in a game largely conducted at a sluggish tempo, while the hosts' well-drilled defence restricted United to a handful of half-chances.

Robin van Persie had the Reds' best openings, but even the prolific Dutchman had to feed off scraps on an evening when little went right for the visitors, who now sit a point behind reigning champions Manchester City.

As expected, Wayne Rooney and Jonny Evans missed the trip to Norfolk through injury, while David De Gea was a surprise omission as he recovered from having his wisdom teeth removed earlier this week.

Anders Lindegaard deputised in goal, while Chris Smalling continued in central defence and Sir Alex Ferguson made good of his vow to start Javier Hernandez up front, just ahead of van Persie.

The Dutchman was quickly involved in the play, taking little more than two minutes to force John Ruddy into an alert save with a low, curling effort from just outside the area. Collectively, United's early play carried plenty of intent, with the hosts penned back but quick to look for counter-attacks.

The first such break emerged after eight minutes, as Robert Snodgrass intelligently released Pilkington, only for the winger to fire comfortably wide of the target after diligent covering from Antonio Valencia.

The hosts were increasingly menacing in attack - though they did waste a presentable opening when Smalling's scuffed clearance culminated only a blocked shot from Bradley Johnson - and it took a superb sliding clearance from Smalling to stop Holt from turning in Snodgrass' cross.

Shortly before the break came United's clearest chance of the half, only for van Persie to get himself in a tangle in trying to reach Giggs' beautifully-flighted ball through the middle.

That opening sparked a late spell of pressure from United, and Ruddy produced a superb reaction save to fend away Young's half-volley through a crowded penalty area. Nevertheless, the interval arrived with the points still in touching distance of both sides.

As in the first period, United began the second half brightly. Young's well-weighted pass released van Persie and, though he took two attempts to bring the ball under control, the Dutchman brought a solid save from Ruddy with a low, near-post effort.

Norwich hit straight back and pressured Lindegaard with a deep free-kick from Snodgrass, but in open play both sides continued to serve up a dearth of excitement until just before the hour mark, when Garrido's superb cross was expertedly guided past Lindegaard by Pilkington.

The goal prompted Sir Alex Ferguson to introduce Paul Scholes and Danny Welbeck in place of Chicharito and Valencia, and Welbeck came close to levelling when his header drifted just past Ruddy's upright.

United's general play improved under the dawning realisation of the situation's gravity, but Norwich's resolve redoubled with every passing moment. Two yellow and green-clad banks of bodies steadfastly protected Ruddy, crucially keeping calm and sticking to their task under the mounting pressure.

Norwich passed up a glorious chance to double the margin of victory when Jonny Howson dragged a glaring chance wide, and were indebted to Ruddy's injury-time heroics as he tipped over Sebastien Bassong's errant header, then clutched substitute Anderson's low effort under heavy pressure from Scholes.

Having produced up an inordinate number of rousing late comebacks already this season, United finally returned to the well to find it empty.