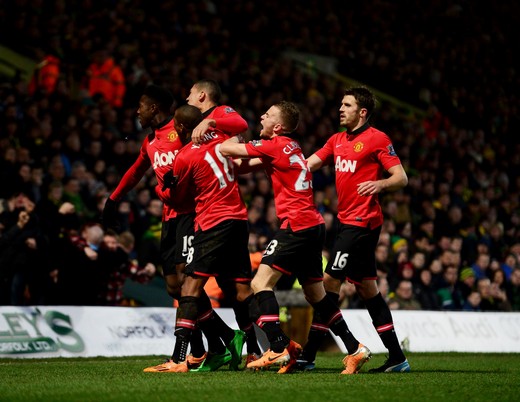 A well-taken goal by substitute Danny Welbeck gave Manchester United an invaluable victory over Norwich City on a hard-fought afternoon at Carrow Road.
The injury-hit Reds were rarely at their best during a largely dour affair, but improved markedly on a poor first half display after the break, and were rarely troubled after Welbeck had put David Moyes' side into the lead shortly before the hour.
The manager's preparations were dealt a blow by the absence of Wayne Rooney, who remained in Manchester with a minor groin injury, while Antonio Valencia was also absent through suspension. While Michael Carrick's first start since early November provided a timely boost, United were disjointed for much of the first period. 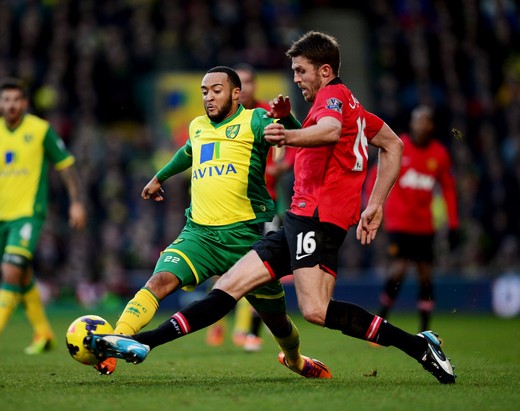 The Reds' two best chances of the first half were separated by 40 minutes. Between those openings - a Shinji Kagawa cross-shot beaten away by John Ruddy and a tame near-post Chicharito effort - Norwich overcame a timid opening to steadily take control of the game. David De Gea needed to thwart Russell Martin, Gary Hooper and Sebastian Bassong, while Jonny Evans bravely blocked a Wes Hoolahan shot and Robert Snodgrass repeatedly chanced his arm from distance without success.
The Canaries had blunted United's attacking play by regrouping quickly in-between their own periods of dominance, but the Reds grasped control of the game with the half-time introduction of Welbeck. The substitute added much-needed pace and penetration to United's approach, and he quickly made a telling difference by charging down Ryan Bennett's clearance and racing onto the loose ball, via a Chicharito touch, before rounding Ruddy and sliding home a finish to settle the game in United's favour and ensure a six-game winning streak to end 2013. 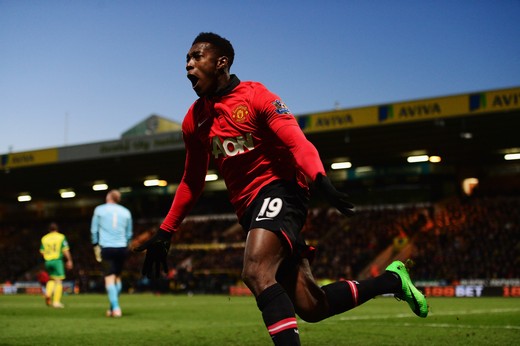 The Match Lacking cohesion amid a considerable injury crisis, United were fortunate to reach the interval still on level terms. Norwich, despite a slow start, controlled the majority of the first period and would have led with calmer finishing from Wes Hoolahan. After the introduction of match-winner Danny Welbeck, however, the visitors' game developed the power and purpose it had been missing, and Norwich were firmly put in their place. While it was rarely pretty, winning at such an inhospitable venue without so many players - van Persie, Rooney, Jones, Valencia, Rafael, Nani and Fellaini were all unavailable - augurs well for the character within David Moyes' squad.
The Goal Having brought the hustle United had been missing, it was inevitable that Welbeck would make the difference as a result of his own industry. Having charged down Ryan Bennett's clearance, the striker raced onto the loose ball after it had rebounded off Chicharito, and he calmly circumnavigated John Ruddy before sliding a finish into the untended goal.
Star men The improvement in United's second half display stemmed largely from the introduction of Welbeck, who deserved his status as the match-winner after a 45-minute outing oozing pace and power. Up to that point, David De Gea had kept the Reds in contention as Norwich regularly created chances, while Chris Smalling provided an unyielding display at right-back to stifle the influence of Norwich winger Nathan Redmond.
Sub plots Welbeck's recent resurgence in front of goal suggests that his game is developing its one missing component. Last year's meagre return has long since been overhauled, and four goals in his last four Barclays Premier League outings have underlined the clinical streak he has developed.
Opposition Norwich's transition from defence to attack and back again occurred at a troubling pace for United in the first period, and the hosts were left to rue missed chances during their spell of control. After the Reds had forged ahead, Norwich's performance level dropped off and their passing became sloppy, allowing United to close out the victory without De Gea fielding a single serious effort.
Move of the match The signs of the improvement in United's play were evident shortly before Welbeck's winner, when a spell of neat passing from Shinji Kagawa, Tom Cleverley, Michael Carrick and Ashley Young exited a tight situation. The move eventually came to a head, however, when Sebastian Bassong blocked Kagawa's run into the area and escaped without censure.
In the stands Having made the ardous journey across to Norfolk, United's travelling support made the most of their afternoon with a typically boisterous display throughout the game. Norwich's supporters were behind their side for the most part, but became understandably tetchy as a second consecutive home defeat hoved into view.