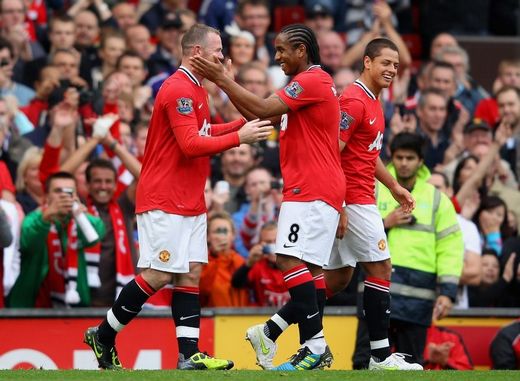 Whatever City can do, United can do better.

While the blue half of Manchester looked set to dominate the footballing agenda with a stunning 5-1 win at Spurs, United went goal crazy against a depleted Arsenal side to steal the headlines and hammer home a warning to Roberto Mancini's team and the rest of the Barclays Premier League.

In a game that had everything - a missed penalty, a converted spot-kick, a hat-trick for Wayne Rooney, a red card and 10 goals, United simply romped home 8-2.

Danny Welbeck, Ashley Young (2), Nani and sub Ji-sung Park also hit the net with David De Gea superbly saving a penalty when the lead was a slender one. Theo Walcott and Robin van Persie replied for the crestfallen Gunners, who had Carl Jenkinson sent off in the second half.

United made their intentions clear from the start with Welbeck charging down Wojciech Szczesny and looking a real threat. Tom Cleverley and Welbeck shot wide and some of the Reds' passing was mesmeric.

So it was no surprise when the hesitant visiting defence failed to deal with Anderson's clever lofted pass and Welbeck steered a looping header over Szczesny for the opener. Chris Smalling dragged wide after setting up the chance for himself beautifully but, against the run of play, Arsenal were awarded a penalty when Jonny Evans pulled at Walcott's shoulder. De Gea dived to his right to push van Persie's spot-kick around the post and earn the congratulations of his team-mates. And, from United's next attack, Young collected a header out by Armand Traore and bent an inch-perfect curler past Szczesny's despairing fingertips for 2-0.

De Gea had to be alert to make a double save from Andriy Arshavin and van Persie but the champions carried the greater threat with Welbeck diving to head Rooney's cross off target. A hamstring injury cruelly ruined the young striker's afternoon, and Arshavin, who was very fortunate to still be on the pitch after a foul on Young when already booked, flashed a warning shot over the bar at the other end.

Jenkinson was also lucky to avoid a red card when hauling Young down as he sprinted through on goal but Rooney ensured his own justice was meted out by rolling the free-kick for Young to trap and then sweeping past Szczesny with the power on the shot too much for the Polish keeper.

Rooney showed the confidence flowing through the team when testing Szczesny from his own half but there was real complacency seconds before the interval to allow Tomas Rosicky to feed Walcott, whose drive from an angle whistled through De Gea's legs for 3-1.

It was a message that the job was still far from done, and one that was taken on board as Sir Alex's side turned up the heat again in the second half. Szczesny saved well from Young and Nani chipped wastefully off target as the hosts pressed but the Gunners responded with De Gea superbly stopping a van Persie volley and Arshavin firing wide when Smalling was caught up the pitch.

Tom Cleverley shot weakly at Szczesny after a brilliant one-two with Young and Nani failed to convert a cross from the former Aston Villa winger but the dam broke again when Rooney repeated his free-kick feat in the first half by whipping home for 4-1 and becoming United's all-time record scorer in the Premier League.

Smelling blood, Smalling tore forward and ignored Phil Jones on the overlap to instead feed Rooney, who prodded through for Nani to net with the most outrageous of cheeky finishes. Nani then made way, along with Anderson, for Ryan Giggs and Park but the relentless attacking continued.

Rooney wedged a golf-like shot of sheer class against an upright before Park exchanged passes with Young to bury a low finish into the corner of the net. Van Persie restored a semblance of pride with emphatic finish after being played onside by Jones but United simply stepped up a gear again.

Jenkinson received a second yellow card for bundling Javier Hernandez over when he was through on goal and there were more illegal tactics used to halt the red tidal wave when Walcott tripped Patrice Evra inside the box. Rooney stepped up to seal his hat-trick with a confident spot-kick and it got even worse for the North Londoners when Young curled in to add his second from a Giggs pass.

Park shot over in stoppage time but enough damage had been inflicted to the Gunners' battered pride as the home fans rejoiced on a day to remember at Old Trafford.

David De Gea
A quite superb penalty save to deny Robin van Persie instantly elevated his status with the Old Trafford faithful and a double-stop from Andriy Arshavin and the Dutchman proved his class. Even though he'll be frustrated to allow Theo Walcott to pull one back, his second-half save from van Persie's volley was again from the top drawer. No chance when the Arsenal captain finally go the better of him.

Chris Smalling
Little wonder Fabio Capello thinks he can be England's right-back. This Rolls-Royce of a footballer was absolutely outstanding again and looks extremely comfortable when linking with the attack. Dragged a shot wide after some splendid set-up play and he seems like he's been playing at this level for years.

Jonny Evans
Commanding and composed, he snuffed out an early through ball to van Persie and was comfortable at the heart of the defence. Conceded a soft penalty when making contact with Walcott's shoulder but that was the only blot on another stylish display.

Phil Jones
Caught by a rash Arshavin tackle which would have forced lesser men off but he soldiered on and showed his powers of recovery when calmly nodding back to De Gea after initially producing a dangerously wayward header. Unlucky to play van Persie onside for Arsenal's second goal after crashing into the net when trying to head away.

Patrice Evra
Won a penalty to allow Wayne Rooney to clinch his hat-trick and easily won his battle with Walcott, often stopping the young Gunner in his tracks. Attacked with extra verve and swagger in the second half and he'll be proud to have skippered the side in a match like this.

Nani
Some fans groaned when he failed to convert an Ashley Young cross soon after producing a poor chip when better options were placed in the middle. They'd do well to understand the nature of flair players like Nani, who are always asked to produce something special. That's precisely what he did with the most arrogant of finishes that had the crowd purring prior to being given a rest by the boss after a performance that also included some impressive work in winning possession back.

Tom Cleverley
A spiky display from the midfielder who was often too strong for the likes of Aaron Ramsey and Francis Coquelin. An unfussy footballer, he helped make the side tick with a mature showing that should ensure another place in Capello's England plans for the Euro qualifiers.

Anderson
Always plays the game with a smile on his face - his distracting tactics from free-kicks even raised a smile from the under-siege Wojciech Szczesny. He'll think he deserves too exists for Rooney's bullet set-pieces and will argue the striker was off target with another after he'd left the field.

Ashley Young
So unlucky not to win man-of-the-match as this was a sensational display by the confident winger. Always willing to take on, and beat his man, he carved out numerous openings and was unlucky not to get a treble himself. His two firecracker finishes were his first goals for United - he'll do well to hit one as sweet as the opener which was a goal the very second it left his boot.

Wayne Rooney
Talk about hitting the ground running. Has scored in each of the three league games so far and is already the leading marksman in the division - despite often dropping deep to dictate his play. It'll take somebody a while to tot up his Fantasy League points for his stupendous display that included a hat-trick of set-pieces - two free-kicks and a penalty. Also hit the woodwork with a quite brilliant shot and tried his luck from his own half in the first half. Exceptional.

Danny Welbeck
Up for this from the first whistle when he charged down a clearance by Szczesny. Deserved his goal - a looping header - and dived to nod another opening just wide. Cruelly cut down by a hamstring pull when he was enjoying running Arsenal ragged.

Subs:
Javier Hernandez (for Welbeck, 35m)
Still feeling his way back to full fitness - hence the lack of a goal for the Mexican marvel. Came deep to get involved and probably would have scored but for the foul by Carl Jenkinson that led to the defender's red card.

Ji-sung Park (for Nani, 67m)
Loves playing - and scoring against Arsenal - and his sweet finish ensured he got in on the act. Almost added number nine in the dying embers of the match but his shot cleared the bar.

Ryan Giggs (for Anderson, 67m)
Effortlessly goes about his business these days. As on Monday, claimed another assist when his pass was rocketed into the net by Young for the eighth goal.