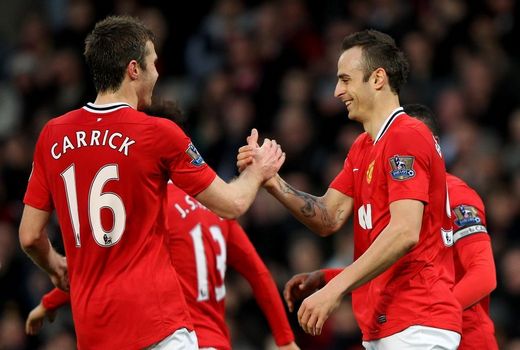 A clinical hat-trick from Dimitar Berbatov and well-taken finishes from Ji-sung Park and Antonio Valencia gave United a second successive five-goal victory and moved the Reds level on points with Manchester City at the head of the Barclays Premier League table.

Park opened the scoring inside 10 minutes and Berbatov added a double either side of the interval, before Valencia blasted home against his former club and Park won a penalty for Berbatov to confidently convert with 10 minutes remaining. City's unexpected stalemate at West Brom means now only goal difference separates the two title rivals.

A much-changed Reds side coped comfortably with widescale reshuffling, though their cause was aided by the harsh dismissal of Wigan striker Conor Sammon for a perceived elbow on Michael Carrick, who again deputised in defence.

Sir Alex Ferguson was forced to make several personnel changes to his side. Phil Jones and Chris Smalling missed out through illness, and were replaced by serial moonlighters Valencia and Carrick. In turn Darron Gibson stepped into midfield while Park took up a berth on the left wing and Nani shunted over to the opposite flank. The visitors, conversely, were unchanged from their previous outing. The Reds' perfect league record against the Latics had been aired repeatedly in the run-up to the match, but Roberto Martinez's side arrived at Old Trafford on the back of successive away wins at Sunderland and West Brom, as well as creditable home draws against Chelsea and Liverpool.

Buoyed by the champions' comparative unfamiliarity, Wigan's early approach demonstrated a willingness to commit numbers to counter-attacks, and one surging run from Victor Moses culminated in a shot which Carrick chested to safety. The bulk of the visitors' early play was, however, spent trying to congest central areas; a plan which United tore up inside eight minutes.

Patrice Evra ended some patient possession play by bursting into the Wigan area, bypassing challenges from Moses and Antolin Alcaraz and sliding a ball across the area for Park, who stabbed a neat finish around Maynor Figueroa and past the unsighted Ali Al-Habsi. Scenting blood, United continued to pour forward down the flanks, flooding the space afforded by Wigan's three-man central defensive line-up. Park found Berbatov, whose pull-back was destined for Chicharito until Caldwell intervened. Moments later the Mexican's neat turn was negated by a hooked challenge from Alcaraz, yet referee Phil Dowd ignored the United striker's compelling claim for a penalty.

A second goal seemed inevitable. Caldwell escaped embarrassment as his pressured clearance ricocheted against Al-Habsi, while Gibson's effort from 25 yards was deflected wide by Ronnie Stam and Nani's free-kick from similar range curled a yard off-target.

Jordi Gomez spurned a promising free-kick from a similar position for the visitors, scuffing his shot against the wall, before Moses drew an important block from Gibson after fashioning space for himself in the United area. Stam then flung a superb ball across Anders Lindegaard's area, only for the Latics' lack of attacking numbers to undo its excellence.

Just as the visitors were growing in confidence, however, they were dealt a crippling double blow, as they lost a player and a second goal in the space of two minutes. Referee Dowd judged that Sammon deserved a red card for catching Carrick with a stray arm, but the apparent lack of intent in the striker's flailing prompted irate protests from his colleagues. Their fury was compounded soon afterwards, as Gibson's curled cross found its way to Berbatov on the edge of the six-yard box. Though the Bulgarian's first touch, for once, sent the ball looping out of control, he admirably held off Alcaraz and clinically tucked a left-footed finish underneath the onrushing Al-Habsi.

Events prompted minor half-time tinkering from both managers. Sir Alex withdrew Jonny Evans - his only fit central defender, and one carrying a booking - moved Evra inside and introduced Zeki Fryers at left-back. Roberto Martinez compensated for Sammon's loss with the arrival of striker Franco Di Santo in place of Mohamed Diame. The Argentine moved forward to partner Moses in a 3-4-2 formation which, while bold, left Wigan fragile in the face of United attacks. Park might have doubled his own tally within moments of the restart, as his header was palmed out by Al-Habsi, only for the rebound to fall tantalisingly shy of the Korean's reach.

Berbatov then headed a floated Giggs corner narrowly over, before the Bulgarian assured United's victory with another goal drenched in his unquestioned class. Valencia embarked on another voyage down the yawning right flank and slipped a pass inside to the striker, who controlled the ball with his right instep and spun to face the goal in one motion, before toe-poking a fabulous finish high into Al-Habsi's net.

That was the cue for further changes, with Giggs and Nani removed and preserved for forthcoming festive action, and Kiko Macheda and Wayne Rooney on in left wing and central midfield berths respectively. Though the game slowed markedly, only a stunning close-range stop from Al-Habsi prevented Chicharito from turning in Rooney's mis-hit volley.

Having cruised through much of the second period, United cranked up the pressure with 20 minutes remaining. Macheda's cross-shot was palmed over by Al-Habsi and Caldwell's inadvertant header dropped just wide, before Valencia heaped further misery on his former employers with a cracking strike. A half-cleared corner was worked across to the Ecuadorian by Carrick, and Valencia thundered a low shot across a packed area and into the far corner; his second goal in as many Old Trafford outings against the club who brought him to England.

United were making substantial inroads into the goal-difference deficit City had built up during the opening months of the campaign, and notched up another when Alcaraz felled Park on the cusp of the area. Berbatov duly stroked home the penalty to complete his treble.

The joyous feel around Old Trafford was further heightened by news of City's stalemate at West Brom. As the Reds continue to gather momentum in spite of a raft of injuries, drawing level at the top proved an unexpected, yet highly welcome, festive fillip for the champions.

Anders Lindegaard
The Dane might have spent the 90 minutes in an armchair, turkey sandwich in one hand, snifter of sherry in the other; he had that quiet an afternoon. Had no shots to stop and scarcely a counter-raid to launch.

Antonio Valencia
Revelled against Wigan's narrow defensive formation, repeatedly raiding down the right wing in support of Nani. Defended well, but really caught the eye going forward and haunted his former side with a belting goal.

Jonny Evans
Had a comfortable afternoon sweeping up behind makeshift partner Michael Carrick, and looked assured before he was removed at half-time to ensure his fitness. Booked for a hefty challenge on Jordi Gomez.

Michael Carrick
Peerless, even in a makeshift role in defence. His anticipation, coolness and ability on the ball made him a commanding presence at the heart of the Reds' backline.

Patrice Evra
Did well in both defensive roles - left flank in the first half, central in the second - and popped up to play a key role in Park's opener to continue his recent resurgence in terms of assists.

Nani
Worked well in tandem with Valencia down the right flank. Unselfishly opted to pass, rather than shoot, on many occasions, and was removed midway through the second period to preserve him for the rest of the festive period.

Darron Gibson
His first Premier League start of the season, but the Irishman slotted in neatly alongside Giggs. Had one goal-bound effort deflected wide in the first period, but largely kept it simple throughout.

Ryan Giggs
Dictated United's attacking tempo and used all his nous to pick his way through a packed midfield on several occasions, including one bamboozling run which had even the visiting supporters applauding.

Ji-sung Park
Started the match in sensational fashion; covering every blade of grass and harassing the visiting defenders into mistakes. Scored with a very neat early finish and won the contentious penalty that wrapped up the win.

Dimitar Berbatov
A return to last season's swaggering best for the Bulgarian, who celebrated his start with a superb hat-trick, the undoubted highlight of which was his beautifully-taken second goal. Sublime.

Javier Hernandez
The Mexican put in an all-action shift and should have had an early penalty after a challenge from Alcaraz. Frustrated not to score after a blinding close-range stop from Ali Al-Habsi.

Fryers (on for Evans)
More minutes under the belt for the highly-rated youngster, who continues to press for more inclusion.

Rooney (on for Giggs)
Slotted into midfield but seemed determined to extend his goalscoring run, chancing his arm on a handful of occasions.

Macheda (on for Nani)
Operated on the left wing but saw plenty of the ball and almost scored with a cross-shot.