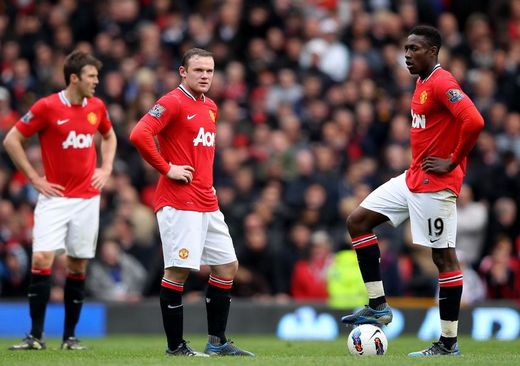 Manchester United's title defence was hindered in shocking fashion as, having come from behind, the champions let slip a two-goal lead to take only a point from a pulsating encounter with Everton.

Nikica Jelavic capped an impressive start by the visitors with a superbly-taken header, only for Wayne Rooney to bag a vital leveller for the hosts shortly before the interval.

Danny Welbeck and Nani put the Reds two goals clear with brilliantly-executed strikes, only for Marouane Fellaini to reduce the arrears with a neat volley. Rooney then capped another fine move to seemingly put the game to bed, only for Everton to muster a grandstand finish.

Jelavic bagged his second after sloppy defending from the Reds, before Steven Pienaar restored parity from close-range after the visitors had been allowed to stroll through the hosts' stunned ranks.

Despite sustained pressure from United thereafter, insufficient time remained for the champions to find a winner, and the next outing, at second-placed Manchester City, looks increasingly pivotal.

Sir Alex Ferguson made just one change to the side which had eased past Aston Villa a week earlier, with Nani replacing Ashey Young, who dropped to the bench. The visitors, shorn of Leighton Baines, shunted Sylvain Distin to left-back in the most noteworthy of three alterations from the starting line-up beaten by Liverpool at Wembley.

Though the devastating nature of that FA Cupdefeat  might have impacted on their outlook, Everton began in impressively fine fettle. Leon Osman forced a sharp stop from David De Gea, then flashed a shot across the Spaniard's bow. In-between, the spritely midfielder also released Nikica Jelavic, only for De Gea to plunge to his left and hold the Croatian's low shot.

Having been placed so emphatically on the back foot, it was little wonder that nerves swept through United, both on the field and in the stands. Everton were compact and obstinate without the ball, tidy and motivated with it, while the Reds appeared to labour under the pressure of the situation.

It took the efforts of Nani to lift the mood among the home contingent. The Portuguese curled wide of the far post from 20 yards, then forced Howard into a catch with a near-post effort from similar range. When both Wayne Rooney and Paul Scholes missed the target in quick succession, there were clear signs that United were warming to the task.

Yet still the visitors looked threatening and purposeful. Ex-Reds midfielder Darron Gibson was a yard off-target with a long-range left-footer and Evans performed a heroic block to rebuff Osman's shot from the edge of the box, and it was on the cards that they would eventually find their range. Just after the half-hour, they did.

Steven Pienaar featured heavily in a neat move from the visitors, in which the ball was eventually ferried wide to Tony Hibbert. The right-back's cross was high and deep, yet Jelavic still managed to angle a header over De Gea and just inside the Spaniard's far post for an excellent finish.

While the goal had validated the nervousness of the home support, it also seemed to liberate them from it, helping to spur on Sir Alex's side, who were now in no doubt of the ramifications of any points concession.

The volume inside Old Trafford was considerably cranked up, and climbed all the way to 11 when the Reds drew level just seven minutes after falling behind. Nani, United's liveliest attacker throughout the first period, took the ball from Patrice Evra and curled in a superb cross which cleared Phil Neville and dipped sufficiently for Rooney to nod in from close range.

Game on, and United might even have been in the lead by the break, as Nani's free-kick was headed back across the box by Evra, but Welbeck could only steer his own header a yard wide, albeit under heavy pressure.

With Manchester City due at table-propping Wolves in the afternoon's late kick-off, victory was imperative for United. Nevertheless, the second half began in similarly low-key fashion, with an edgy atmosphere gripping the hosts' play.

It took 10 minutes for United to forge a sight of the Everton goal, as neat interplay between Nani and Evra released the Frenchman, only for his pull-back to be intercepted by Phil Jagielka. Within long, however, the champions were ahead.

The hosts' first sustained spell of pressure culminated in Gibson shanking an attempted clearance high in the air, and the ball eventually came to Welbeck, just outside the area. The striker faked to shoot, totally out-foxing Johnny Heitinga, before nonchalantly curling a beautiful finish high into Howard's top corner.

Everton protested the award of the goal, on the grounds that Pienaar still lay injured after apparently twisting his knee in the build-up to the goal. Referee Mike Jones had declined to halt play, however, and the goal stood.

For good measure, another goal quickly followed, and once again its importance was almost equalled by its aesthetics. Patient play worked the ball to the edge of the Everton area, before Carrick found Welbeck, who delightfully released the onrushing Nani to clip a delicate finish over Howard.

Just when it appeared safe to exhale, however, Everton hit back through Fellaini. Again Hibbert was heavily involved, swinging in a cross which fell perfectly for the Belgian to clinically volley past the exposed De Gea, who might have asked questions of his defence's marking.

However, just as the game had been played before an ever-alternating backdrop of rain and shine, so the impetus quickly swung back United's way, with yet another beautifully crafted goal.

Valencia, by now terrorising Distin after a low-key first period, played the ball infield for Welbeck, who dummied and raced onto a pass from the man behind him, Rooney, before sliding a perfect ball across the area for his strike partner to calmly convert.

Having been conducted at such a breathless pace, the game inevitably lulled for a spell. United appeared in total comfort, and might have put the game out of sight when Valencia's cross was headed against the post by Evra at point-blank range, but instead the visitors somehow found the reserves to haul themselves level in double-quick time.

Firstly, the Reds failed to clear the danger deep inside the penalty area, allowing Jelavic to slide home a simple finish. Then, with United again ragged defensively, the ball was worked down the Everton left and pulled back for Pienaar to convert at De Gea's near post.

With a position of total comfort and control surrendered, Old Trafford was stunned. Time remained for Evans to head Nani's cross over the bar and Howard to tip Ferdinand's shot over, but the shocking nature of Everton's comeback had sucked away United's momentum.

The champions must now go to the Etihad Stadium in eight days for what could prove to be a playoff for the Barclays Premier League title.

David De Gea
The Spaniard conceded his first league goals at Old Trafford since January, and had little chance with any of them as the Reds' recently well-drilled defence had a collective off-day.

Rafael
Made a quiet start to the afternoon and gradually became an attacking force, in tandem with Valencia. Might have made Jelavic work harder for the opener, however, and will look to bounce back in his next outing.

Jonny Evans
Tasked with the tricky job of looking after Jelavic, the Northern Irishman endured his most difficult afternoon for months. Again looked confident and proactive, but will be disappointed at the overall poor defending which shipped three late goals.

Rio Ferdinand
Had an engaging individual battle with Marouane Fellaini, but his much-vaunted partnership with Jonny Evans had an off-day. Only denied a last-gasp winner by Tim Howard's spectacular save.

Patrice Evra
Attacked with abandon in the second period and unfortunate not to score when his header thudded against a post, but will be disappointed that two goals came from crosses on his flank.

Antonio Valencia
Embodied United's performance. Off-key and seemingly reluctant to get at Distin early on, but obliterated the Frenchman for the most part before ultimately tailing off and making way for Chicharito.

Michael Carrick
Came under constant pressure by virtue of Everton's concentration of bodies in central areas. Neat and tidy in possession as ever and dictated the tempo as the Reds bagged three goals in 13 minutes.

Paul Scholes
Like Carrick, struggled under heavy pressure from an Everton midfield naturally inclined to cluster centrally. The whirlwind nature of the game was far removed from the usual Old Trafford spectacle of patient probing, which didn't suit the veteran.

Nani
One of the game's most menacing attackers throughout. Flung in a brilliant cross for Rooney's leveller and clipped in an impish finish himself in the second period.

Danny Welbeck
Ran himself into the ground and deserved to be on the winning side. Impressive throughout but unbelievable in the second period, in which he scored a fabulous goal and notched two key assists.

Wayne Rooney
Demonstrated his burgeoning partnership with Welbeck, and provided the cutting edge in attack with a pair of clinical finishes from close range. His goalscoring form could be key in the coming weeks.

Phil Jones (on for Scholes, 86)
Introduced very late in the day as United sought to fight back again, but had little time to influence proceedings.

Javier Hernandez (on for Valencia, 89)
Only on the field for injury-time, and had very little contact with the play....