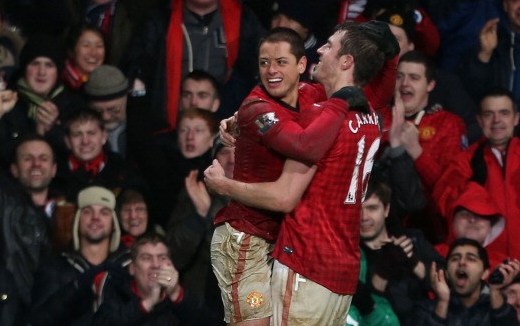 The Reds were rarely at their best against a brave Newcastle side, who exploited the hosts’ uncertain defending in rain-sodden conditions before succumbing to United’s improved second half display.

Incredibly, Manchester City’s defeat at Sunderland allowed the Reds to build a seven-point lead at the head of the Barclays Premier League table, on an afternoon when Sir Alex Ferguson’s side looked set for a desperate setback.

The tone for an eventful encounter was set when, in the first minute, Chris Smalling’s header fell for Demba Ba, who slashed wildly at his finish and completely missed the ball. The Senegalese striker’s next effort, however, led to the game’s opening goal.

Pouncing on Michael Carrick’s mis-control in the middle of the field, Ba advanced on goal and chanced his arm from 25 yards. De Gea parried away the low effort, but the ball fell perfectly into the path of the onrushing Perch for a simple tap-in.

United’s endeavours to get back into the game were met not only by the emboldened visitors, but the teeming rain and increasingly slickened playing surface. The conditions made hard work for both sides, but the visitors forged the game’s next chance as Rio Ferdinand headed away Cisse’s goal-bound effort.

There were signs of encouragement as the visitors were gradually penned back from the 20-minute mark. Chicharito almost reached Ryan Giggs’ tempting cross, while Mike Williamson was fortunate to escape a penalty claim after clambering over the Mexican. As soon as United located the target, however, parity was restored. 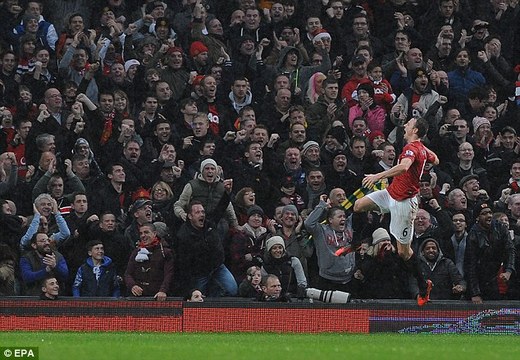 Van Persie’s in-swinging free-kick was flicked on by Giggs and the ball became stuck among a ruck of players. Chicharito was the first to react, quickly firing off a shot which Tim Krul brilliantly saved, only for Evans to reach the rebound ahead of Simpson and slide home the leveller.

Yet, just three minutes later, the Northern Irishman had inadvertently restored the visitors’ lead amid scenes of confusion. The ball was worked wide to Simpson, who advanced into space and smashed in a  cross-shot which Evans, in his attempts to intercept, could only divert inside De Gea’s post.

There appeared to be an unlikely reprieve for the Reds as the goal was quickly apparently chalked off for offside, but referee Mike Dean consulted his assistant and duly concluded that Evans had applied the finish, rather than the lurking Papiss Cisse.

Having so quickly surrendered a position of promise once again, United’s game retook an uneasy air, while Newcastle were seemingly first to every ball. Matters almost worsened for the league leaders when Sylvan Marveaux curled a free-kick against De Gea’s crossbar, but the interval arrived with a one-goal deficit reflecting kindly on United’s display.

The second period began with greater promise than the first, with van Persie volleying wide from Giggs’ centre, but Newcastle defended aggressively; holding a high line and snapping into challenges with on-going vigour. The Magpies also continued to threaten at the other end, with Ba flashing a header over from Cisse’s cross. 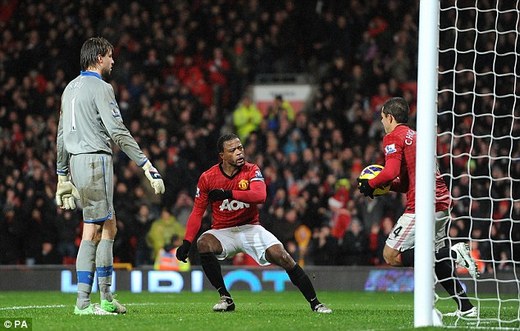 Shortly before the hour-mark, with the visitors apparently holding firm, United levelled out of nothing. Van Persie’s cross was tamely headed away by Perch, straight to Evra. The skipper took a touch and fired a venomous low effort through Ba’s legs and underneath the fingertips of Krul, bagging the Frenchman's fourth goal of a  relatively bountiful season.

United’s dander was up and the mood inside Old Trafford was dramatically lifted, yet Newcastle’s ongoing menace was signalled when Ba only narrowly failed to reach Cisse’s knock-down in a packed penalty area. Sure enough, the visitors took the lead for a third time with 22 minutes remaining.

Substitute Gabriel Obertan took advantage of yawning space down United’s right flank, slid a ball across the area and the onrushing Cisse powered home an unstoppable finish. An apparently devastating blow to United, but there would be greater drama to follow. 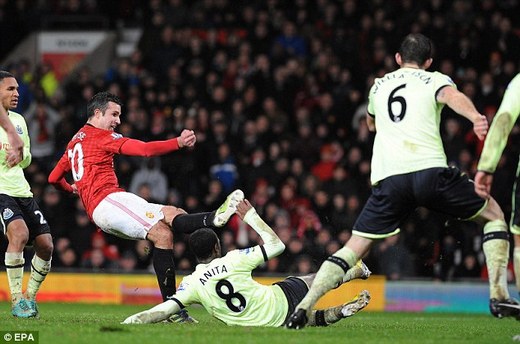 Incredibly, the Reds drew level just two minutes later. Valencia powered down the right flank and crossed for van Persie, whose powerful effort was beaten away by Krul. Carrick alertly stabbed it back to the Dutchman, however, for a low, drilled finish past the Newcastle stopper.

An enthralling game had taken another twist and, tantalisingly, had over 15 minutes remaining. It seemed inevitable United would take the lead for the first time just moments after levelling as Chicharito rounded Krul, but the Mexican found his options shut down by his angle to goal and a converging posse of defenders.

Both sides continued to push for the win, as Obertan’s teasing cross inched past De Gea’s post, before van Persie brilliantly  half-volleyed Carrick’s lofted pass fractionally wide. With ten minutes remaining, Chicharito leapt to meet Valencia’s fine cross, but could only nod against the outside of the upright from an inviting position.

Just as it appeared United were set to snatch an unlikely victory, Newcastle came within a lick of paint of re-taking the lead for a fourth time as substitute Sammy Ameobi’s trickling effort rebounded off the inside of De Gea’s post and bounced back to the relieved Spaniard.

Continuing the game’s metronomic pattern, Chicharito headed Giggs’ cross straight at Krul from close-range, before van Persie nodded past the top corner, also from a Giggs centre. Then, just as the clock reached 90 minutes, Chicharito sent Old Trafford into delirium. The little Mexican had spent much of the second period being caught offside by Newcastle’s defensive line, but he timed his run perfectly to be level with Simpson, reaching Carrick’s superb lofted pass to slide a perfect finish past Krul.

A thrilling afternoon ended on a sour note when Vernon Anita was carried from the field after a heavy challenge from Valencia – contributing to nine added minutes – but the final whistle heralded an unlikely, invaluable victory for United. A huge dose of festive cheer for all of a Red persuasion, but only after yet another afternoon in the wringer.