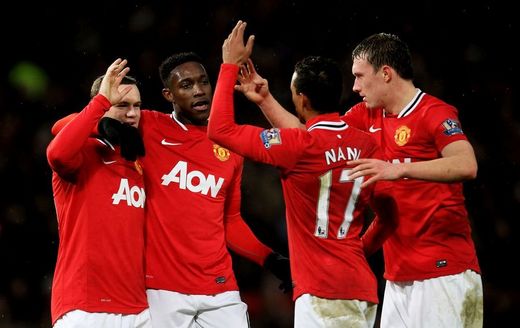 United provided the Old Trafford supporters with the perfect present in the last home game before Christmas, answering the critics with a 4-1 victory over Wolves that cuts the gap at the top to two points, with leaders City in action at Chelsea on Monday night.

The manager stressed football is all about how you respond to setbacks and, after the Champions League exit in midweek, this was a dominant display from start to finish. Nani scored twice for the first time in the league and Wayne Rooney ended a run of eight games without a goal with a brace. Steven Fletcher's header at the start of the second half could have set the alarm bells ringing but the Reds moved up another gear again, in probably the most exciting performance since the win over Chelsea.

As expected, Sir Alex replaced injured skipper Nemanja Vidic with Jonny Evans while Antonio Valencia and Danny Welbeck also started and Michael Carrick returned following his European ban. The visitors mustered an attempt within 20 seconds as in-form Steven Fletcher lashed wide with his left foot. But it proved to be a rare raid from Mick McCarthy's team as the champions took complete control.

Encouragingly, both wingers, Valencia and Nani, showed a willingness to take their markers on and a cross from the Ecuador international was headed just over the top by a diving Carrick. Wayne Hennessey was forced to make a couple of saves to deny Rooney, the first of which was comfortable, but the second was an excellent stop with an outstretched right leg after the Reds' No10 latched onto a measured pass by Carrick.

Within a minute, the pressure told as Nani controlled a pass by Valencia and moved menacingly towards the centre of the field. With the crowd urging the exciting Portuguese talent to shoot, he obliged by arrowing a drive past Hennessey for the opener. The confidence flooded back into the hosts' play as Rooney and Danny Welbeck combined superbly in attack while Phil Jones got forward regularly, forcing one saving tackle by Karl Henry after Welbeck robbed Jamie O'Hara.

A second goal was no less than United deserved with Chris Smalling, Carrick and Nani all involved in the build-up that led to Rooney's firm strike catching Hennessey out and beating the keeper's despairing right hand. Entertaining the fans with some enterprising play, the Reds ensured the one-way traffic continued all the way to the interval. Rooney forced a diving save out of Hennessey and Welbeck saw a shot deflect off target after being found by Nani. The final effort of the half came from the eye-catching Nani, who could only float a tame shot at Hennessey after some more magical approach work.

However, Wolves caught the Reds cold at the start of the second half to reduce the arrears. Matt Jarvis did well down the left and his deep cross was met by Fletcher, who outjumped Patrice Evra and squeezed his header between Jonny Evans on the line and the bar to make it 2-1.

After going out of two cup competitions recently and being criticised from all quarters, this was another test of the team's mettle. The answer was emphatic as United simply piled forward with renewed vigour and soon restored a two-goal advantage. Valencia was really positive in his play when collecting a Jones pass and driving into the danger zone before firing in a cross that was touched home by the alert Nani.

Evans had a couple of openings when moving up from defence while Valencia displayed his confidence by again hurtling towards goal, only to send his finish wide. After receiving another pass from Jones, the right-winger then delivered another accurate cross and Rooney showed textbook technique to superbly volley a difficult opportunity past Hennessey.

Welbeck was unable to cap his performance with a deserved goal as he couldn't convert a Jones cross and forced a couple of saves out of Hennessey following some more excellent teamwork. Fletcher (twice) and O'Hara worked David De Gea at the other end but United were on cruise control, breaking almost at will in a bid to extend the lead further.

Rooney's curler was kept out by Hennessey to deny the striker a hat-trick and substitute Federico Macheda could not supply the finishing touch after a lung-busting run by Jones. At the other end, there was a moment of danger when Evans had to clear superbly after a Stephen Hunt shot struck Barclays Premier League debutant Ezekiel Fryers, and the lively Jarvis forced a decent stop out of De Gea.

David De Gea
Had no chance with Steven Fletcher's header and was rarely troubled. Made a couple of clean catches and punches when the ball was launched into the box and made his most difficult save late on from Matt Jarvis. The BBC suggested before kick-off he was under-fire but not from anybody at Old Trafford - he was ManUtd.com's Player of the Month for November.

Chris Smalling
Got forward to good effect but had his hands full with the slippery Jarvis as the game wore on. Made a couple of telling tackles on the winger and caught the eye coming forward, linking well with Antonio Valencia on the right.

Rio Ferdinand
A dominant defensive display, making a couple of brilliant headers under pressure inside his own area. One classy piece of mopping up when Fletcher threatened saw him not only snuff out the danger but release Wayne Rooney on the break. Took over the captain's armband and received a huge cheer when keeping one ball in on the touchline and his only worrying moment came when he headed against Smalling. Picked up a rare booking late on.

Jonny Evans
Nearly broke his United goalscoring duck on a couple of occasions and filled in well for injured captain Nemanja Vidic. One nice stretch and pass to Nani was top quality and he made one important clearance in the second half. Was unable to prevent Fletcher's header creeping under the bar when back on the goalline defending.

Patrice Evra
The skipper tried to launch attacks from his own half and showed neat skill after a short free-kick didn't come off. Was outjumped by the much taller Fletcher for Wolves' goal but was defensively sound before being withdrawn and replaced by Ezekiel Fryers.

Antonio Valencia
The Ecuadorian was back to his best, taking on defenders from the outset with renewed confidence. He can claim three assists for his afternoon's work and also set up an early chance for Michael Carrick. Playing with real spark, he drove forward and shot wide in the second half and was on fire for one spell after the break.

Phil Jones
Full of vibrancy and energy, growing into his midfield role as the game wore on. Showed real desire to win a header in the middle of the park and was unlucky not to get on the end of a couple of crosses. His defensive nous allowed him to win a couple of vital aerial interceptions in his own box and his thrilling run late on almost set up a goal for Federico Macheda.

Michael Carrick
Another assured display from Mr Consistentcy, whose midfield authority was missed in Basel. Finding his colleagues with unerring regularity, he kept the tempo high and almost got on the scoresheet with a diving header over the bar. One slide tackle after a misplaced Evans pass typified his understated defensive work.

Nani
Always willing to take on - and beat - his man, he struck twice for the first time in a Barclays Premier League game and assissted Rooney's first strike. A solo effort had the crowd on its feet when breaking the deadlock and he controlled his finish to Valencia's fierce cross for his second. Pretty unplayable when in this kind of mood and a key man for the champions ahead of the festive period.

Wayne Rooney
Back on the goal trail with a flourish and only Wayne Hennessey prevented him from adding to this two-goal tally. The Welsh keeper made one fine stop but was beaten by the speed of the striker's shot for the second goal and had no hope of keeping out the excellent volley that made it 4-1. Rooney got his knee over the ball in classic fashion to steer home a finish that indicates he is about to hit top form again.

Danny Welbeck
Did everything but score in a lively performance that earned the acclaim of the fans when he was substituted for Macheda. Encouraging link-up play with strike partner Rooney thrilled Old Trafford and some of his passes were top drawer. A tired finish after wriggling clear for what would have been a sensational team goal indicated the amount of effort he put into his game.

Ezekiel Fryers (for Evra, 67m)
The Barclays Premier League debutant looks like an able deputy for Evra. He was unlucky not to pick out Welbeck with one threaded pass and won a goal-kick off Ronald Zubar in his best defensive moment.

Federico Macheda (for Welbeck, 74m)
Hadn't had time to become acclimatised to the occasion when failing to control an inviting Jones pass and he was also unable to scramble home after a powerful run by the former Blackburn youngster.

Ashley Young (for Nani, 77m)
Made a risky tackle on Hunt inside the box but won the ball cleanly and only conceded a corner. Did not have enough time to make too much of an impact going forward.