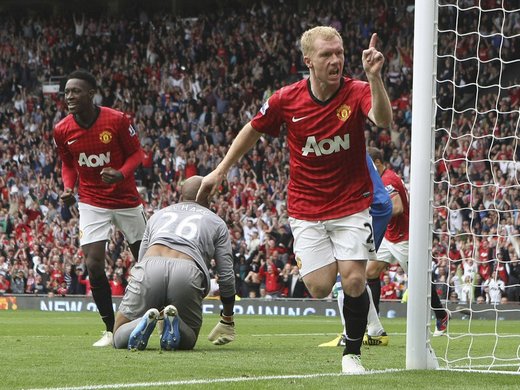 Paul Scholes marked his 700th Reds appearance with the opening goal, before players from the opposite end of the experience scale ratcheted up the scoreline. Having had his early spot-kick saved, Chicharito turned in Alex Büttner's shot, then the Dutchman marked his home debut with an impressive solo goal and fellow new boy Nick Powell rifled in the Reds' fourth goal from distance.

Sir Alex Ferguson had implored his side to go for goals during the course of this season, rather than closing out games and conserving energy, and the manager would have been delighted to see the Reds steadily turning the screw even as time ebbed away.

With all bar Phil Jones, Wayne Rooney and Chris Smalling available, Sir Alex had several selection dilemmas to ponder, the end result being five changes from the side which won at Southampton earlier this month. Scholes and Rio Ferdinand moved onto 700 and 400 United appearances respectively while Ryan Giggs made his 600th Premier League outing. Büttner made his maiden appearance at left-back, while fellow summer signings Powell, Robin van Persie and Shinji Kagawa were on the bench.

Despite the raft of changes, United should have moved ahead inside the first five minutes. Danny Welbeck latched onto a searching through-ball from Giggs and reached the ball ahead of the onrushing Ali Al Habsi before tumbling to the ground. Though there was minimal contact and Welbeck made no appeal, referee Michael Oliver pointed to the spot, to the visible and understandable enragement of the visitors. Their ire was soothed, however, when Al Habsi plunged to his left to comfortably palm away Chicharito’s effort from the spot. Justice had quickly been done, to the detriment of the mood at Old Trafford, which was understandably flattened by the spurned opportunity.

Welbeck appeared to place himself in sole charge of enlivening the crowd again, turning in a lively attacking display which gave the Wigan defence a torrid time. The England striker forced Maynor Figueroa into a vital sliding block, then cracked a superb volley just wide after Nani’s teasing, clipped cross. Twice more Welbeck came close – having a shot deflected over after nicking possession, then striking Nemanja Vidic with a goal-bound shot – before Wigan threatened for the first time as Ivan Ramis headed wide from Shaun Maloney’s out-swinging free-kick.

Emmerson Boyce then scuffed a shot narrowly wide of Anders Lindegaard’s near post as the visitors began to demonstrate their counter-attacking menace, before Welbeck headed just over from Carrick’s clipped cross. For all Welbeck’s prominence, however, it was Nani who had the Reds’ clearest open-play opening of the first period. Chicharito held the ball up and teed up Giggs to release the Portuguese winger, who fell foul of an untimely bobble as he tried to loft the ball over Al Habsi and sent his finish high into the Stretford End crowd.

A mood of frustration briefly turned to relief just before the break when Wigan spurned their own presentable chance. Jean Beausejour sent in a fine cross from the left flank which narrowly evaded Franco Di Santo but fell perfectly for Arouna Kone, who prodded wastefully wide of the target. The Ivorian missed the game’s next chance, in the first minute of the second period. Again Beausejour was the provider with a pinpoint cross, but this time Kone had to contort to direct a header comfortably off-target.

Those missed chances were quickly exploited when United took a 51st-minute lead, and there was an air of poignancy about the goal as Scholes capped his milestone day in style. It took a wonderfully incisive pass from Carrick to pierce the visitors’ well-organised defence and release Nani, whose cross was palmed out by Al Habsi and into the path of the merciless Scholes.

A simple finish from the veteran cranked up the crowd's volume and the decibel level was sustained as referee Oliver was unmoved by a series of fair, yet bone-crunching challenges from both sets of players. Shortly after the hour mark, United struck a quickfire one-two to end the contest, with Büttner heavily involved in both.

With both teams encamped in the Wigan area, Welbeck nicked possession and fed Giggs, who teed up Büttner. The Dutchman’s shot appeared to be clearing the far post, but it was instead diverted past Al Habsi by Chicharito, lurking with intent and played onside by Boyce. United’s players rushed to salute Büttner’s part in the goal, and the left-back was soon at the epicentre of celebrations again as he marked his debut with an unforgettable goal. Picking the ball up on the left flank, the 23-year-old shrugged off the attentions of Kone, motored past Boyce, nicked the ball away from James McCarthy and then beat Ramis before unleashing a shot which squirmed past Al Habsi.

After Lindegaard rushed from his line to deny Kone, Sir Alex took the three-goal advantage as his cue to ring the changes, first replacing Scholes and Giggs with Nick Powell and Van Persie. After the Dutchman had skewed wide under heavy pressure from Gary Caldwell, the Reds’ third change was Jonny Evans giving Nemanja Vidic a breather.

In the game's final act of note, Powell followed Büttner, van Persie and Kagawa in marking his home debut with a goal, cutting infield and arrowing in a 20-yard shot which Al Habsi was unable to palm away. That set the seal on a thoroughly enjoyable afternoon's work for the Reds, who demonstrated an impressive bloodlust and made the perfect start to a week which also contains a return to Champions League duties and a trip to Anfield.