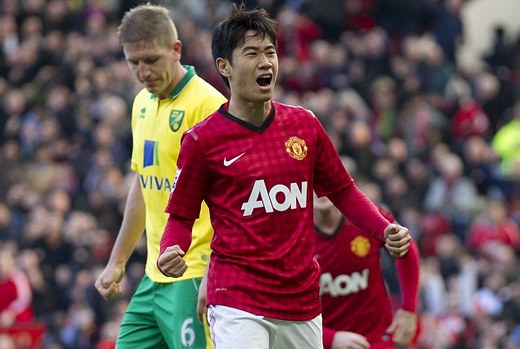 Kagawa's first goals since the defeat to Tottenham in September illuminated proceedings at Old Trafford and Wayne Rooney added a sensational fourth in the final minute with a long-range special.

After scoring in first-half injury time, the Japan schemer produced two of the calmest finishes you are ever likely to see before Rooney wrapped up a convincing win against the Canaries, who inflicted the Reds' last defeat at league level in November.

With Manchester City not in action until Monday, the Reds can enjoy a sizeable lead at the summit whilst beginning to prepare for the visit of Real Madrid.

Sir Alex Ferguson fielded a strong side despite the European tie with Real looming large on Tuesday but a slow-paced start offered some encouragement to the visitors and Bradley Johnson made a hash of his cross after finding a lot of space out wide.

Although Javier Garrido hacked away when Nemanja Vidic met a Robin van Persie free-kick with a header, the first real sight of goal came after 15 minutes when a slick move saw Rooney attempt to find van Persie but Mark Bunn was out to save bravely at the Dutchman's feet.

The first shot on target was a tame one, 10 minutes later, with Michael Carrick's harmless daisy-cutter rolling through to Bunn, and it was only around the half-hour mark that the Reds started to click into gear. To their credit, the Canaries defended manfully as Rooney saw shots blocked by Michael Turner and Russell Martin but the East Anglians looked comfortable without showing too much ambition themselves.

When van Persie worked the ball onto his favoured left foot, expectations were high but the leading scorer skied a wayward effort into the Stretford End and the frustration continued until first-half injury time to compensate for an earlier knock to Bunn. 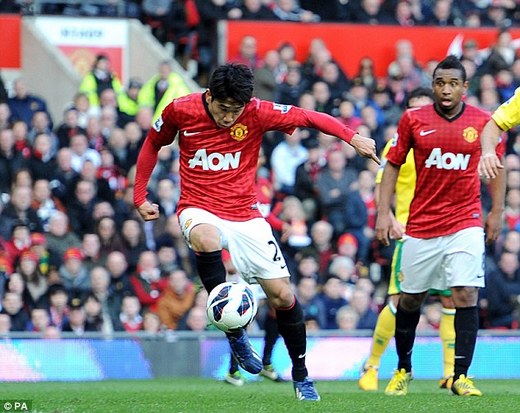 Chris Smalling fed Antonio Valencia and the winger's low cross was nudged on the stretch by van Persie into the path of Kagawa, who tucked the ball past Bunn with the outside of his right foot. There was concern for van Persie, as he appeared to hurt himself when supplying the assist, and then Patrice Evra after the latest of Robert Snodgrass' lunging tackles saw him rightly booked.

Norwich started the second half with more intent and Vidic was forced to clear behind his own goal when Snodgrass tried to meet a cross by Anthony Pilkington. Although Bunn had to be out to prevent Rooney latching onto an astute through ball by Kagawa, City continued to press with Jonny Howson's drive deflecting wide off Carrick.

Referee Neil Swarbrick, officiating his first United game, then spared Martin's blushes by penalising Holt for climbing on Evra to head back a Pilkington cross, with the defender shinning the ball over the bar from close range. 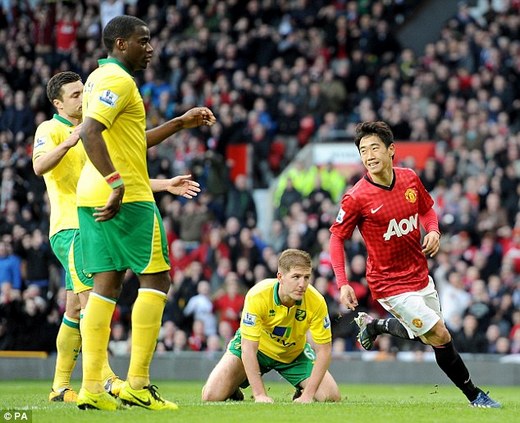 After that major scare, Sir Alex introduced Danny Welbeck and then Tom Cleverley in a bid to gain some control with the match still very much up for grabs heading into the final 15 minutes. However, Kagawa added his second of the game in impudent fashion to give United some breathing space.

Carrick released Rooney and the England international held off Bassong to roll the ball into the path of Kagawa, who was the coolest man inside Old Trafford as he simply touched a confident finish wide of Bunn to display real quality.

Another Rooney-inspired charge forward then led to Welbeck forcing a decent save out of Bunn and those two players were involved in the build-up to Kagawa's hat-trick strike, the forward running onto Rooney's pass and dinking a sweet finish into the net. 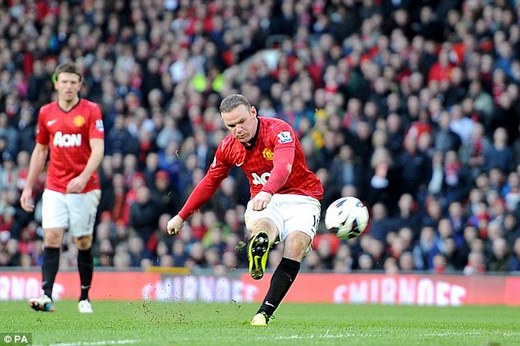 Wayne Rooney rifled home his side's fourth of the match

In the 89th minute, a fourth added gloss to the scoreline with Rooney clearly getting better and better as the game wore on - hopefully an ominous sign for Madrid. Moving into shooting distance outside the box, the no.10 hit a stunning drive that dipped over Bunn but under the bar to set the seal on a thumping victory.