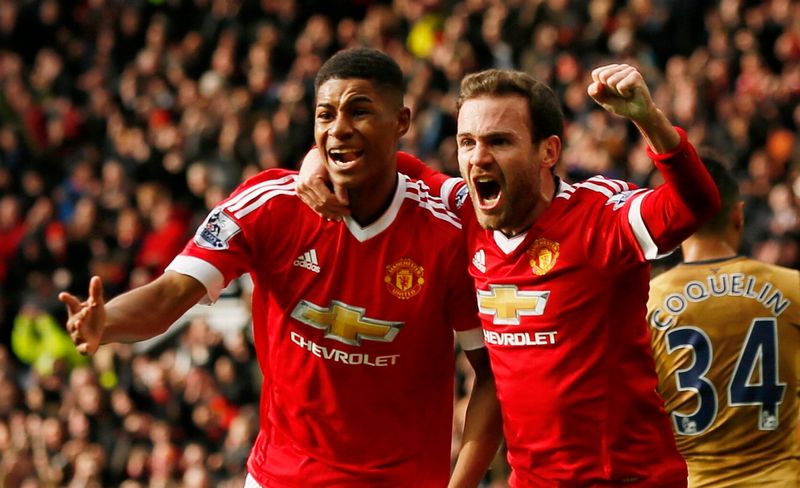 Marcus Rashford scored two goals and set up another as Manchester United secured a dramatic 3-2 victory over Barclays Premier League rivals Arsenal.
The young striker repeated his midweek debut heroics, firing United into a 2-0 lead with a double in three first-half minutes, but former Red Danny Welbeck pulled one back five minutes before the break.
Rashford was involved again with 25 minutes remaining, teeing up Ander Herrera to add a third, and Mezut Ozil's reply proved in vain for Arsene Wenger's side.
Ahead of the game, the Reds were boosted by the news of David De Gea's return to the starting line-up, in one of two changes from the side that beat Midtjylland on Thursday. Marcos Rojo was also named on the teamsheet, having come on as a late substitute against the Danish champions.
As expected, both sides were eager to make an early impression and came out of the traps quickly. The first chance was a significant one and fell at the feet of Nacho Monreal, who was found superbly by Ozil on six minutes but couldn't beat De Gea from close range.
The Reds had an appeal for a penalty turned down shortly after, as Rashford went past two defenders before going down under a challenge from Gabriel Paulista. Replays showed the fouled occurred outside the area, and Memphis forced Petr Cech into a good save from the resulting free-kick. 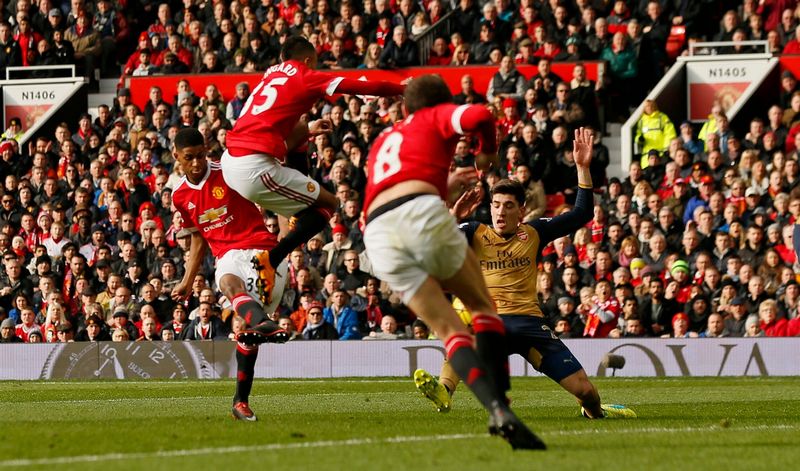 With chances few and far between, the game burst into life just before the half-hour mark. United broke forward in numbers and the ball found Guillermo Varela on the right; Arsenal failed to clear the youngster's first-time cross, and Rashford calmly fired the Reds into the lead. 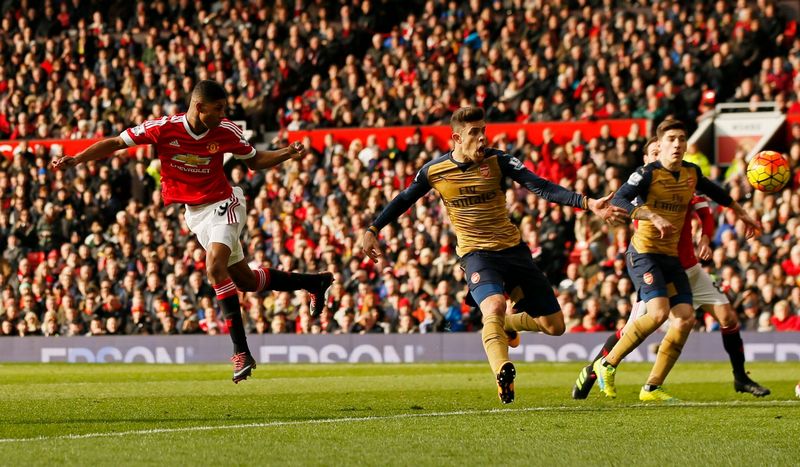 The goal left the Gunners shaken, and Wenger's men were soon picking the ball out of their net again. The Reds attacked at pace once more, and another right-wing cross did the damage. Varela picked out Jesse Lingard, and the winger's pin-point delivery was met by Rashford, who headed beyond Cech to send Old Trafford into raptures. 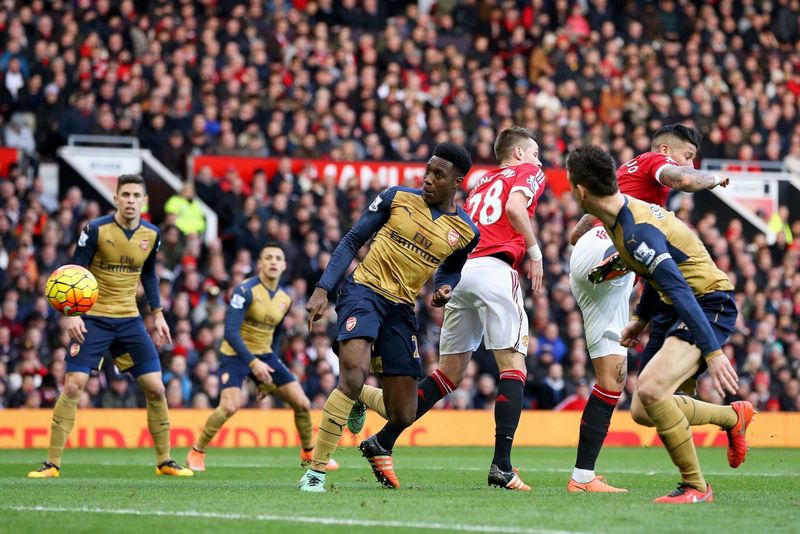 Arsenal weren't going down easily, though, and fought back five minutes before the break. Again Ozil was the provider, whipping in a free-kick for Welbeck to easily nod home, and cap an entertaining half of football.

POSSESSION: United 45% Arsenal 55%
SHOTS (ON TARGET): United 4 (3) Arsenal 8 (2)
CORNERS: United 0 Arsenal 2
The second half began as the first had ended, with the visitors on the front foot. Having played a key role in October's reverse fixture, Alexis Sanchez was starting to grow into the game, and saw an effort well blocked by Rojo after darting along the 18-yard line.
The United defender was forced off shortly after following a 50-50 challenge with Welbeck, meaning 18-year-old Timothy Fosu-Mensah would make his first-team debut. The injury setback prompted Arsenal into a change of their own, with Olivier Giroud on for the final 30 minutes. 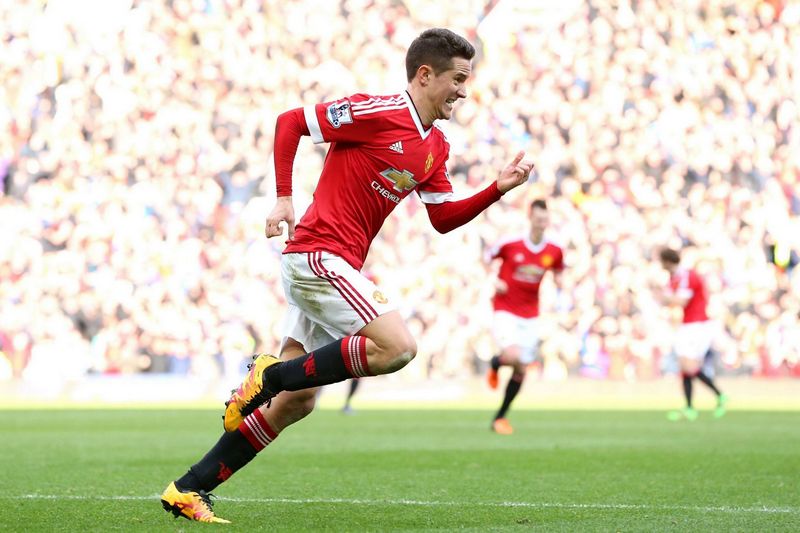 It was Louis van Gaal's side who continued to create the better chances, though, and the next opportunity provided United's third. Rashford picked up the ball in the Arsenal area and turned before teeing up Herrera, whose shot took a heavy deflection off Laurent Koscielny on its way in. 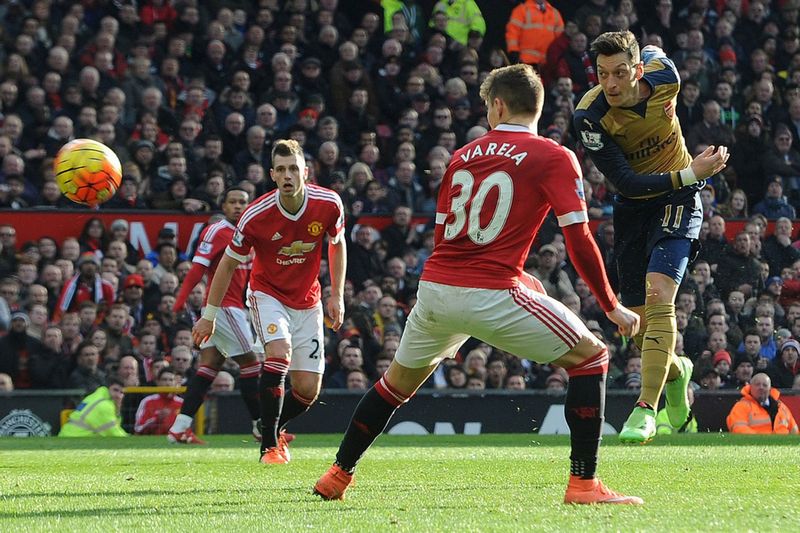 Memphis might have added a fourth after more excellent hold-up play by Rashford, but the Gunners again produced a quick response. Welbeck found space in the area and produced a superb save from De Gea, but Ozil was there to score from the rebound, volleying in off the turf.
Tensions inside Old Trafford were as high as they had been throughout the game, and players from both sides were booked during a period that was typical of the fixture. Amid the chaos, Arsenal were still looking for an equaliser, and Giroud reminded the Reds of his aerial threat when heading over the bar with time running out.
Though chances were scarce, the away side continued to press, and five minutes of added time were announced at the end of the half. But United, in particular the returning De Gea, stood strong to see out a vital win and claim all three points.

"It’s a massive win for us and I think it’s been a great week – we played great football and won against a big rival today. Today is a day to be proud of the club and its Academy." - Juan Mata

Manchester United vs Arsenal ALL GOALS