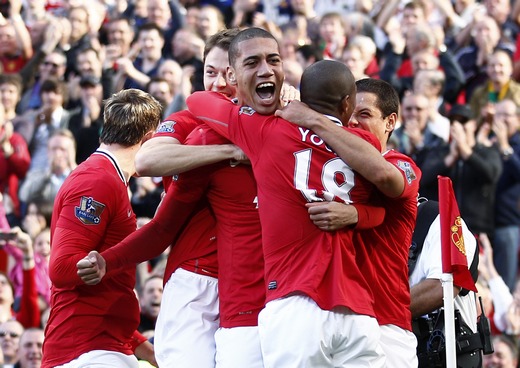 The champions beat Chelsea 3-1 thanks to goals from Chris Smalling, Nani and Wayne Rooney in an action-packed clash at Old Trafford. Although Fernando Torries replied for the Londoners at the start of the second half, his dreadful late miss only added to the ecstatic mood around the ground.

Sir Alex's side could even afford a missed penalty from Rooney and several spurned chances en route to a fifth straight victory in the Barclays Premier League to go two points clear at the top of the table.

United were slower into stride than in this fixture last term, and yet still led after only eight minutes. David De Gea had been called into drastic action to kick away a Ramires shot early on but the opener soon arrived, in front of the Stretford End.

Ashley Young was fouled and swung the free-kick over for Smalling to bury an unstoppable header for his first league goal for the Reds. Replays showed the defender may have been marginally offside and the goal provoked a decent response from the visitors. When Anderson passed the ball straight to the Spaniard, Old Trafford held its breath but the £50million man dragged his shot wastefully wide of the far post.

De Gea caught a Bransilav Ivanovic header and saw Frank Lampard lash wide, after the England international midfielder rightly escaped a handball shout inside his own area. There was an almighty let-off on 26 minutes when Torres was onside and in the clear but squared the ball.

Ramires stretched to force a wonderful, improbable stop from De Gea with Daniel Sturridge waiting behind for a simple tap-in.

The Reds no.1 gathered the resulting corner at the second attempt and also kept out an unmarked Sturridge while Torres sent an unconvincing overhead kick wide as Chelsea had few problems creating chances. But Nani showed them how to finish with a piece of individual magic, collecting Jonny Evans' diagonal pass, advancing on goal and fizzing a firecracker of a finish past Petr Cech's flailing right hand.

With a two-goal advantage, United continued to look menacing and, just before half-time, Rooney was involved early on in a move that saw Phil Jones maraud forward from centre-back. Eventually, John Terry's clearance bounced fortuitously off Nani and into Rooney's path. He calmly despatched a third.

This was never going to be a cakewalk for the champions and substitute Nicolas Anelka made an immediate impact at the start of the second half when setting up Torres for a clever finish over De Gea. Mata forced the Reds stopper into action again but United should have extended the lead when Nani broke onto a Rooney pass and, after seeing his shot come back off the bar, was fouled by Jose Bosingwa as he latched onto the rebound.

Phil Dowd opted against carding the Portuguese defender and no punishment was meted out as Rooney slipped when taking the spot-kick, evoking memories of John Terry's miss in Moscow by screwing it wide.

United continued to press after Antonio Valencia and Michael Carrick were introduced but Jones headed a delicious Young cross wide and Chelsea worked hard to get back into the game. Romelu Lukaku was denied by a saving challenge from Patrice Evra soon after coming on and Torres fired a rebound over after De Gea parried his initial shot. The woodwork then saved the visitors when Rooney hit a post from an Evra cross and Javier Hernandez was hurt by Ashley Cole's challenge as he crashed the ball into the side-netting. Cole was booked but there was no penalty as the Mexican limped off.

The home fans were celebrating as though a goal had been scored when Torres rounded De Gea with seven minutes left but inexplicably shot wide of the empty net with his left foot. There should have been another strike to enjoy in injury time but Rooney's unselfish pass was a little over-hit to Dimitar Berbatov, who could only send his shot against Cole on the line. Nonetheless, this was another impressive three points for the Reds, who continue to look unbeatable at Old Trafford. Chelsea's fans were chanting: "We're going to win the league" in the dying seconds but, on this evidence, it was more out of hope than expectation.

David De Gea: Made a vital stop after only three minutes to deny Ramires but performed even greater heroics when keeping out the same player later in the half. Stood up to a number of shots and displayed accurate distribution but he had no chance with Fernando Torres' consolation.

Chris Smalling: Was up to the task at right-back before going off injured. Opened his United account in the league with a thumping header to get the Reds up and running and continues to look as effective as a natural full-back. Given a real test by substitute Nicolas Anelka but showed strength and character throughout their tussles.

Phil Jones: The teenager is just getting better and better. There were numerous examples of his defensive prowess - a powerful tackle on Juan Mata, winning a sprint with Torres and making some important interceptions. After playing a key role in the Wayne Rooney goal by charging forward, he exuded confidence after the break and also had a header wide.

Jonny Evans: Immaculate and commanding, the consistency he's been looking for has definitely returned. An excellent tackle on Torres bailed Javier Hernandez out after a sloppy pass and one chested clearance illustrated his composure. Impressive again.

Patrice Evra: Combined well with Ashley Young and made one superb flying block as well as a goal-saver when Romelu Lukaku looked to profit from a Mata corner. Enjoying his role as captain, he showed his experience during the 90 minutes and bombed forward when appropriate - including when setting up one great chance for Rooney.

Nani: A stunning performance from the Portuguese winger, who is capable of winning games on his own. Tormenting Ashley Cole at times, he scored a simply brilliant goal and displayed great skill to ensure the Blues could never relax in defence. Only the bar denied him a second - that and the foul by Jose Bosingwa that led to the penalty.

Darren Fletcher: Heavily involved in midfield on his return to league action and not only helped control matters but was often seen cajoling and encouraging his team-mates in his role as a senior figure. An influence who has been missed but now appears to be right back in the manager's plans and rightly so on this evidence.

Anderson: Some raking passes caught the eye but he also made a few sloppy balls and almost gifted Torres a goal. An important tackle on Raul Meireles, however, showed what improvement he's made to his game this term and he put in a shift before being replaced.

Ashley Young: Laid on the Smalling header with a free-kick and was unlucky not to create another goal when Jones headed his inviting centre off target. One spectacular overhead clearance emphasised his defensive responsibilities but he's at his best when tearing down the left flank, as he did at will.

Wayne Rooney: Kept up his run of scoring in every league game this season with a simple finish when John Terry's clearance bounced to him off Nani just before half-time. Although still wearing in new boots, he could have added to his tally - slipping and sending a penalty wastefully wide and hitting a post from an Evra cross. Always involved in the build-up and a key figure for the champions.

Javier Hernandez: Will be a little frustrated as much of his work was down harrying and chasing back as Chelsea refused to allow the Mexican predator a sniff of goal. Linked up well with Rooney at times but his only clear sight of goal came when he hit the side-netting and felt the full force of a lunge by Cole that led to him hobbling off through injury.

Antonio Valencia (for Smalling, 62m): Robust at right-back, the stocky wide man looked like he'd been playing there all his life. Quickly into the fray, he made an instant impact in closing down Anelka and using his power and strength. Teamed up with Nani to good effect - surely every opposing full-back's nightmare.

Michael Carrick (for Anderson, 62m): A steadying influence as United tried to slow the game down a little with chances being created at will at both ends. One backpass to De Gea produced groans from the fans but it was important he helped ensure the Reds maintained a grip on proceedings.

Dimitar Berbatov (for Hernandez, 79m): Fought for the ball and was keen to make his mark but was unable to find the net after being teed up by Rooney late on. The Reds' No10's pass was perhaps a little misplaced and led to the Bulgarian firing against Cole on the line rather than wrapping things up with a fourth. Good to see him back in action again, though, and the home fans afforded him a hearty reception on his introduction.