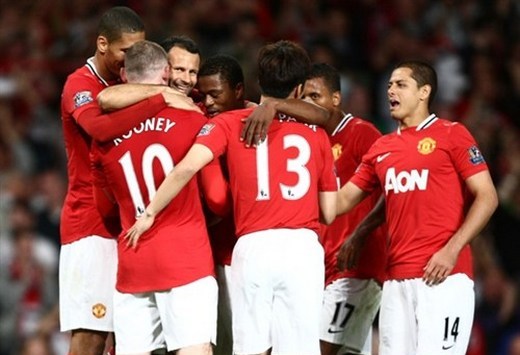 There's no substitute for experience, although energy and enthusiasm are going a long way at Old Trafford at the moment.

Sir Alex may not be able to call on the likes of Edwin van der Sar, Paul Scholes or Gary Neville anymore, but in the place of cool heads the boss now has pace, power and, judging by this performance, no small amount of panache.

Against Tottenham Hotspur at Old Trafford on Monday night, United's kids – we can call them that: the side Sir Alex sent out was the second youngest he's ever fielded in the Premier League – ruled the roost and goals from Danny Welbeck, Anderson and Wayne Rooney handed the Reds a victory built as much on vim and vigour as patient passing or tough tackling.

There was also beauty. Anderson's goal was pure pleasure, a simple finish after a crisp passing move and a cheeky backheel by Welbeck tore open the Tottenham defence to leave space for the Brazilian to blaze through the middle. That came sandwiched between two headers: Welbeck's opener and Rooney's second goal of the season, three minutes from time.

But while United were certainly brilliant at times, Tottenham were in this game for long periods – scores were level until 61 minutes – and played a pivotal role in an entertaining, end-to-end affair. The Reds started brightest, though, creating a pair of half-chances inside two minutes, before Tom Cleverley's low side-footed effort drew a fantastic finger-tip save from Brad Friedel as United ramped up the early pressure.

Spurs gradually gained a foothold, although failed to test David De Gea on his competitive home debut until the 21st minute when Gareth Bale's tame shot was fielded easily by the Spaniard down by his near post.

At the other end, Nani's pace and trickery was causing plenty of problems for both Spurs full-backs and Young went close with a clever looping header just before the half-hour mark. De Gea's next examinations came when Nico Kranjcar and then Rafael van der Vaart blasted efforts at goal from the edge of the area. He passed with flying colours, on both occasions showing strong, safe hands. Just as impressive was the Spaniard's composure with the ball at his feet. On numerous occasions, with Tottenham forwards bearing down on him at speed, he kept his cool and picked out red shirts with accurate Edwin-esque distribution.

Despite both sides playing entertaining football at a good tempo and regularly swapping possession (MU 48% TH 52%) and goal attempts (MU 7 TH 8) in the first 45 minutes, the match remained scoreless as the teams trotted down the tunnel.

Friedel, diving down to his right, denied Young shortly after the interval before making an equally impressive double-save to keep out left-footed efforts from Anderson and Rooney.

But there was nothing the big American could do about Welbeck's opener as the young forward rose high and glanced Cleverley's curling right-wing cross into the corner of the net from six yards. Danny hadn't set the game alight until then, but he took his chance when it mattered and proved why Sir Alex has shown so much faith in him at the beginning of this season.

Rooney, who had imposed himself more and more after the break, then went close with a curling free-kick from the angle of the penalty area that Friedel just managed to claw away, before Welbeck's acrobatic overhead kick nestled safely in the experienced goalkeeper's arms.

United were hungry for more and duly doubled the advantage when Anderson scored an early contender for goal of the season when he side-footed home from 12 yards to round off a delightful passing move.

Rooney's close-range header, after Jermaine Defoe had blasted against the post at the other end - then added a bit of polish to the scoreline, with Giggs, sent on as a late substitute, providing the assist with a pinpoint cross from the edge of the area. It was almost as if Ryan was proving there's still room for experience amongst this exciting new crop of talent. For now, though, the youngsters deserve all the plaudits.

David De Gea
Cool and composed throughout the first half and made a number of solid stops from distance. There were one or two jittery moments in the second period but nothing too serious. Fabulous distribution throughout.

Chris Smalling
He prefers playing in the middle but Smalling's confidence on the ball makes him a natural on the right, too. Never looked troubled against Spurs and was brave in a number of aerial challenges. Involved in United's opening goal.

Phil Jones
A strong candidate for Man of the Match, the 19-year-old was fearless at the back and looked as if he'd been playing at this level for a decade. Nevermind one for the future: Phil Jones has already arrived.

Jonny Evans
Led by example at the back, roaring into tackles and organising his fellow defenders. Extremely composed on the ball and often outfoxed Tottenham attackers with his positional play.

Patrice Evra
Strode forward as often as possible before Aaron Lennon pegged him back a little, United's captain for the night was solid throughout. Showed off his incredible vertical jump on more than one occasion.

Nani
Whipped in plenty of dangerous balls between goalkeeper and central defenders in the first half but nobody could capitalise on his expert delivery. Showed for the ball at all times and linked well with his fellow attackers.

Tom Cleverley
Not as dominant as he was in the second half of the Community Shield or at West Brom last weekend, but the youngster was again impressive and crossed for United's opening goal.

Anderson
A lung-busting display for 90 minutes from the Brazilian. Ando saw plenty of the ball - often winning it back himself in midfield - and used it wisely all evening. Added another goal to his steadily growing tally.

Ashley Young
Grew in stature as the game wore on, although he was hardly quiet in the first half. Ashley seems to be relishing life at Old Trafford, particularly his link-up play with Wayne Rooney, and is playing with plenty of confidence.

Wayne Rooney
Scored United's third goal with three minutes to play to cap another strong performance. Dropped deep to boost his involvement and seemed to have more impact after the interval. Pulled the strings, subtly.

Danny Welbeck
Netted the Reds' first with a fine glancing header and then teed up Anderson for the second with a sublime backheel. All this after an opening 45 minutes that never really sparked into life. In the end, a night to remember.

Ryan Giggs (for Cleverley, 81)
Injected experience into midfield to help see out the game and ended up providing a wonderful cross for Rooney to head home on 87 minutes. Still a top talent.

Javier Hernandez (for Welbeck, 81)
Just failed to reach a teasing cross near the end but otherwise had minimal involvement during his late cameo.

Ji-sung Park (for Young, 81)
Produced some good skill on a driving run into the penalty area but scuffed his shot and the ball trickled through to Brad Friedel.