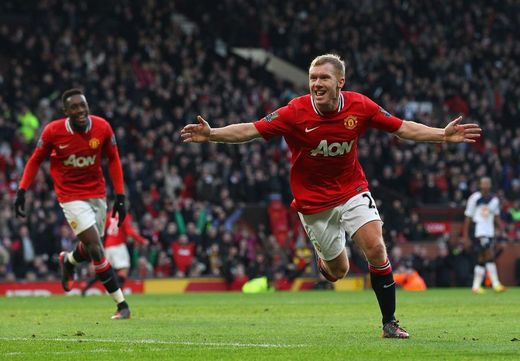 Paul Scholes netted on his Old Trafford return to help Manchester United on the way to a convincing 3-0 win over struggling Bolton Wanderers.

Out of retirement to assist in the Reds’ title push, Scholes broke the deadlock in first-half injury time to cap a memorable homecoming.

In truth, Scholes wasn’t always at his sparkling best during his 69-minute display, uncharacteristically misplacing a handful of early passes and (characteristically, some would say) mistiming the odd tackle. But the way he calmly swept home Rooney’s cross from six yards showed the 37-year-old has lost none of his ability to find the net.

In some ways it was inevitable. And not merely because of the romance surrounding his popular return. No, it’s the sort of thing – finding a way through  a hitherto impregnable defence – that the Reds’ chief lock-picker of the last 15 years has done countless times before.

Danny Welbeck and Michael Carrick added further gloss to the scoreline in the second half, in a game in which Reds goalkeeper Anders Lindegaard was never tested. At the final whistle, Sir Alex's men had drawn level on points with Manchester City at the top of the Barclays Premier League.

The boss made three changes to the side that beat City in last weekend's FA Cup clash, with Jonny Evans and Rafael replacing Chris Smalling and Phil Jones at the back.

Lindegaard retained the goalkeeper's jersey for a third successive outing, while comeback kid Scholes, sensationally out of retirement last weekend to boost United's title bid, started his first competitive match since May 2011 at the expense of fellow midfield veteran Ryan Giggs.

Wayne Rooney and Welbeck spearheaded the Reds' attack but it was Nani who had the game’s first chance, blasting wide after barely a minute. Welbeck spurned an opportunity, laid on by a fantastic searching ball by Michael Carrick, shortly afterwards, although did at least draw a save from Bolton stopper Adam Bogdan.

Carrick was in creative mood early on and almost found Welbeck again with a superb lofted pass from deep in the Reds’ half. The no.16, challenged recently by his manager to become “the pivotal player of our team”, certainly made his mark on this fixture.

Bogdan had to be alert to bravely divert a Nani cross after 15 minutes, before Rooney was twice denied by Bolton defenders - Sam Ricketts with a last-ditch block and Mark Roberts with a goal-line clearance from Rooney’s looping header.

Rooney suffered further frustration on 22 minutes when Bogdan flung himself to his right and brilliantly saved the striker’s penalty, awarded after Zat Knight had clumsily tugged Danny Welbeck to the floor. It was Rooney’s second miss from the spot in as many games, although  last week’s disappointment immediately turned to joy when the striker nodded home the rebound.

Bogdan’s heroics offered no such second chance, though, and the visitors continued on even footing. Only just, though. They had their Hungarian custodian to thank again shortly afterwards when he dived low to his left to keep out Welbeck’s long-range effort, while Rooney’s radar, usually so reliable, failed him again when he screwed an effort well wide of the target.

Bolton didn’t trouble Anders Lindegaard once in the first half. Indeed, the visitors barely ventured into United territory. But just as it looked as though their defensive approach had paid dividendsScholes struck in first-half injury time to pen yet another fairytale moment in his glittering career.

Neither manager made changes at the break, although Bolton emerged more adventurous in spirit. When Mark Davies pounced on a stray pass in the United defence and surged into the penalty area, he teed up David NGog, only to see the former Liverpool player blaze over from close range.

Davies went from chief creator to mop-up man within minutes, tracking back brilliantly to tackle Welbeck inside the penalty area at the conclusion of a speedy United counter-attack.

There was no defender near Rooney when he stretched and spurned a golden chance to convert Valencia’s low cross on 62 minutes. And but for a brave block by Rafael seconds later down the other end – the Brazilian threw himself bravely in the way of Martin Petrov’s volley – the striker may have paid dearly for his profligacy.

Indeed, Bolton kept knocking on the door and Rafael again saved United’s blushes when he cleared Gretar Steinsson’s header off the line. That prompted  a double substitution from Sir Alex, as Scholes (off to a standing ovation) and Nani made way for Giggs and Ji-sung Park.

Five minutes later, Welbeck doubled the Reds’ lead. It wasn’t the prettiest of goals – the ball from Rooney that released Welbeck looked almost accidental, squeezed into his path as a result of Rooney stumbling and falling to the ground – but the young striker took his chance well and slotted past Bogdan from 15 yards.

Sadly for Welbeck, who has now scored in three of his last four starts, he picked up an injury converting the chance and was unable to play any further part in the contest.

Bolton’s resistance was broken again seven minutes from time when Carrick curled a left-footed effort into the bottom corner to notch his first Old Trafford goal since January 2010.

Rafael
Showed a willingness to go forward, and linked up well with Valencia down the right. Made a brave block to deny Martin Petrov, and also made an important goal-line clearance with the score still at 1-0.

Rio Ferdinand
Solid performance from the long-serving defender. One fine run which included a nutmeg on an opponent had the crowd chanting his name.

Jonny Evans
Looked confident on the ball and was prepared to drive forward when the opportunity allowed. Along with Ferdinand, he kept the Bolton attack largely quiet.

Patrice Evra
The captain's positioning was usually spot on at the back; was relatively quiet going forward but went close with a header from a corner.

Antonio Valencia
A superb attacking and crossing display from the Ecuadorian. He constantly found space wide on the right, and supplied a clever throughball for Welbeck to win the penalty.

Michael Carrick
An assured performance featured some excellent passing - for example, a perfectly-weighted ball to set up Welbeck for an early chance. Capped a fine display with an accurate sidefoot finish for United's third goal.

Paul Scholes
Talk about a dream return to OT! The midfielder's name generated the loudest cheer prior to kick-off, and he rewarded the fans by opening the scoring from close range on the stroke of half-time.

Nani
Saw a dangerous cross palmed away by Bogdan, and worried the Bolton back line with his direct running. Was involved in the first goal and looked bright.

Wayne Rooney
After seeing his penalty well saved, he worked hard to make amends, and his persistance to force a way through the Bolton back line led to Welbeck's goal. Could have had a goal himself when he prodded Valencia's cross wide on the stretch.

Danny Welbeck
Tested Bolton keeper Bogdan, and made an intelligent run to win the spot kick. Showed plenty of energy and hard work, and tracked back well to make tackles. His goal was precisely finished and well deserved.

Ji-sung Park (for Scholes, 69)
Looked lively after coming on and was a willing runner. Took up some good attacking positions in the box.

Ryan Giggs (for Nani, 69)
Showed some neat touches, with one inch-perfect crossfield ball to Valencia. Claimed an assist when he set up Carrick's goal.

Javier Hernandez (for Welbeck, 78)
Came on after Welbeck was injured while scoring, and almost netted himself when he met yet another Valencia cross.