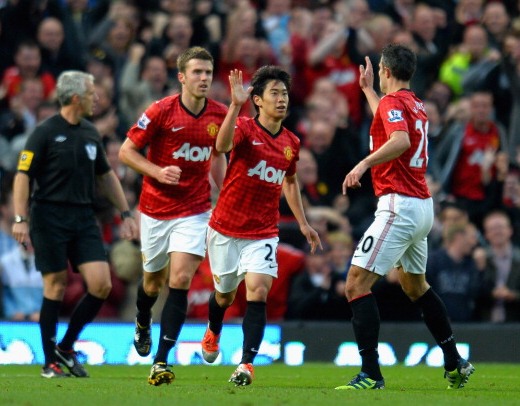 What is it about this fixture that serves up so much excitement? Eleven years to the day after United came from 3-0 behind to win 5-3 at White Hart Lane, Sir Alex's men were at it again.

This time, the comeback never reached its completion. In fact, barring the first two  minutes of the game, the Reds were never even on level terms. But 180 seconds at the beginning of the second half – three minutes of madness that produced three goals – was worth the price of admission alone and epitomised the drama that has long characterised clashes between these sides.

Tottenham, of course, have always played their part in the excitement and on Saturday afternoon Andre Villas Boas' side, a team laden with pace and purpose, were rewarded with a victory that finally ended a 26-game winless streak at Old Trafford.

It's a run that stretched back to 1989, a time when Alex Ferguson had yet to win a trophy with United and before both of this game's right backs – Rafael da Silva and Kyle Walker – were even born.

The wheels of Tottenham's historic victory were set in motion after just two minutes, when the vicitors took the lead before Reds goalkeeper Anders Linegaard had touched the ball. The Dane was understandably furious, as Spurs left-back Jan Vertonghen was allowed to waltz into the penalty area almost unchallenged before stroking an effort goalwards that deflected off Evans and into the net.

It was the worst possible start for Sir Alex's men, and the fifth time in six league games this season the Reds have conceded first.

Worryingly, Aaron Lennon was afforded similar space to run at United's defence just six minutes later. This time, however, a last-ditch tackle by Ferdinand prevented Spurs from doubling their advantage.

Robin van Persie suffered a blow to his ankle in a collision with William Gallas in the Spurs penalty area but was able to continue following treatment. But there was precious little goalmouth action for the home fans to cheer.

Instead, Vertonghen came close to netting again when he headed over Gareth Bale's wide free-kick before Bale himself added a sublime second on 32 minutes.

Again a Spurs player was given too much room in which to operate, and Bale's attack from 40 yards – a surging run into the space left between Ferdinand and Patrice Evra – ended with the Welshman shooting calmly across Lindegaard from 15 yards.

The noise levels inside Old Trafford rose as the home fans, sensing they could play a part in another famous fightback, found their voice. But there was no reward before the break, despite a strong penalty appeal when Nani tangled with Vertonghen on 43 minutes. 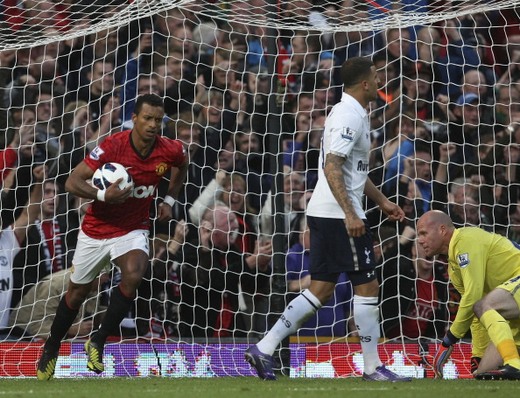 Rooney replaced Giggs at the interval and made an instant impact, crossing for Nani to sidefoot home on 51 minutes. Barely 90 seconds later, the Reds sensationally had another, as Kagawa turned and calmly rolled the ball past Brad Friedel and in off the post.

Criminally, however, United had allowed Spurs to score in the intervening minute – Clint Dempsey stroking in the rebound after Bale had stretched Lindegaard – and restore their lead. And so, less than 10 minutes after Tottenham began the second half 2-0 ahead the scoreboard read 3-2 to the visitors.

The breathless drama didn't stop there. Rooney curled a peach of a free-kick against the woodwork on 61 minutes and van Persie had the ball in the net soon after, only to see his celebrations cut short by the referee assistant's raised flag.

Sandro then escaped sanction when the ball struck his hand inside the penalty area (it would have been a harsh award) before Rooney went close with a low effort and van Persie dragged a golden opportunity well wide of the post.

Gallas, under intense pressure from Rooney, headed clear from underneath his own crossbar as the match entered its final phase, before Paul Scholes saw a blistering 25-yard effort well saved by Friedel and Carrick clipped the crossbar with a near-post flick-on.

All the while, the seconds on the clock ticked away and, with them, United's chances of victory faded.

In the end, despite a valliant final few minutes that even saw Lindegaard charge into the Tottenham penalty area, there was no dramatic comeback.

Defeat, a fate sealed by two sloppy concessions in the first half, was bitterly disappointing. And although Sir Alex wil rue those early defensive errors, he can take comfort in the knowledge that once again his team have been involved in one of the Premier League's truly memorable matches.