Wayne Rooney scored a second-half winner as Manchester United got 2016 off to the perfect start by defeating Swansea at Old Trafford.
The Reds' winless run had looked in danger of being extended to nine games after Gylfi Sigurdsson cancelled out Anthony Martial’s opener.
But with just over 10 minutes remaining, Rooney flicked home Martial’s cross to net his 238th goal for United, moving him above Denis Law into second place in the club’s all-time highest scorers list.
Though there was only one change to the side that drew with Chelsea on Monday – Phil Jones replacing Matteo Darmian – the Reds began the new year in a different system, with Jones joining Chris Smalling and Daley Blind in a three-man defence flanked by wing-backs Young and Martial.
United had lost three consecutive games to Swansea by a 2-1 scoreline but quickly set about trying to end that streak and, within a minute, Ander Herrera had a shot blocked inside the box after an incisive one-two with Juan Mata.
It was another bright and breezy start from Louis van Gaal’s men but the next real chance did not arrive until the 21st minute, when Young’s cross found Rooney on the far side of the box but the captain could only fire into the side-netting. At the other end, it was half-an-hour before David De Gea was tested as he comfortably clutched Wayne Routledge’s drive. 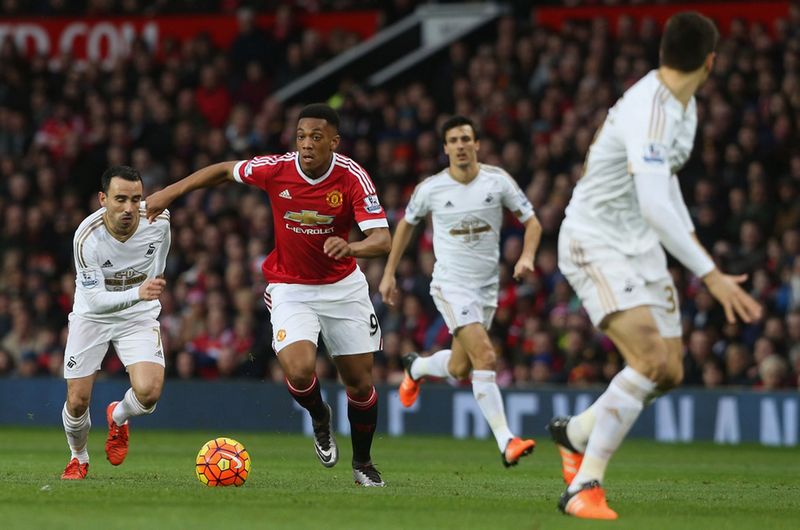 A sharp piece of thinking almost resulted in Mata putting United ahead as Herrera played a quick free-kick on the edge of the box forward to the Spaniard, whose initial shot was blocked by Neil Taylor before his second weaker effort was saved by Swans goalkeeper Lukasz Fabianski.
Fabianski was called upon twice more before the break, firstly clinging onto a Mata shot after Young had beaten Leon Britton to reach the byline and pick out the United no.8, before saving a Rooney header from another Young cross. 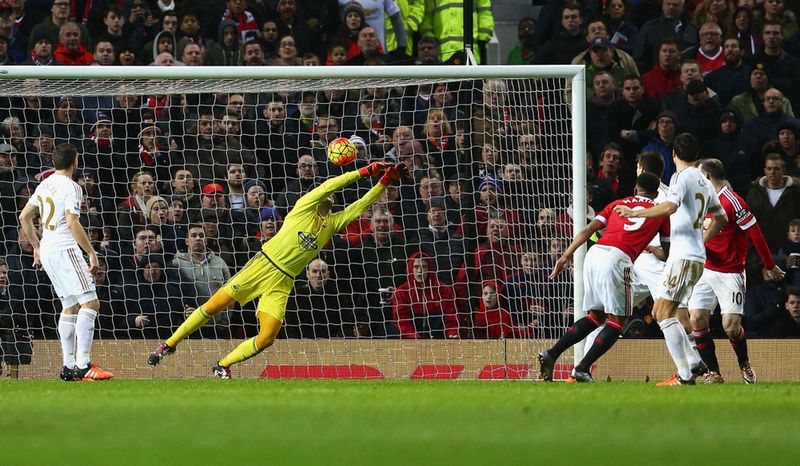 Van Gaal brought on Darmian in place of Jones at the start of the second half and, almost instantly, Rooney had a left-footed shot blocked by Ashley Williams. But it wasn’t long before the Reds took the lead as Young crossed from the right to find Martial and the Frenchman headed emphatically past Fabianski.
Swansea looked for a swift reply and, after Gylfi Sigurdsson broke down the right channel, Darmian did well to recover and block his shot, with De Gea collecting the loose ball.
As the game began to open up, Young was a real threat down the right and twice came close to creating further chances with dangerous deliveries that were headed away by the visitors.
But Swansea had now come out of their shells and Andre Ayew came within a whisker of equalising when he headed against the post, with De Gea beaten. Angel Rangel picked up the loose ball and went down under Darmian’s challenge but was booked for diving. 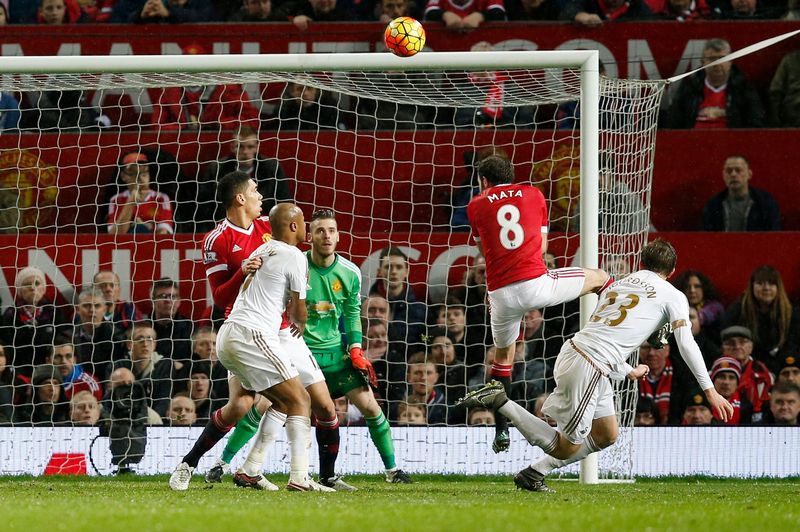 That chance encouraged the visitors and, with 20 minutes left, they equalised through Sigurdsson, who sent a looping header from substitute Modou Barrow’s cross beyond De Gea’s despairing dive. 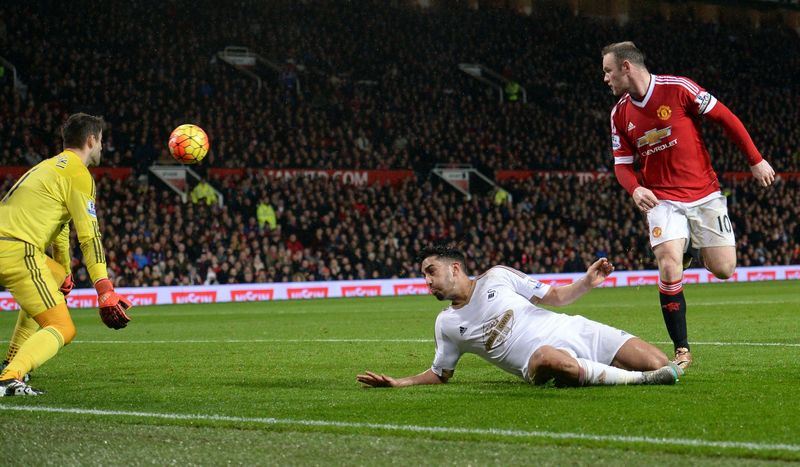 Old Trafford was stunned but United were not deterred and immediately pushed for a winner, which duly arrived in the 77th minute when Martial beat Federico Fernandez on the left and crossed for Rooney to flick home, cueing joyous celebrations in the Stretford End. The goal made Rooney the second-highest Premier League scorer of all time, ahead of ex-Reds striker Andy Cole but behind Newcastle legend Alan Shearer.
Back came Swansea and Barrow had a shot well saved by De Gea as the game entered the final 10 minutes. In stoppage-time, Michael Carrick replaced Herrera to make his 400th appearance but United then survived two huge scares at the death. Firstly, De Gea made a superb flying save from Williams’s shot, before Swansea sent Fabianski forward for a corner and the goalkeeper headed inches wide.
The Reds survived and claimed the points – let’s hope there will be plenty more this year.

Young: "Everyone’s smiling and everyone’s happy. We created plenty of chances and I think we could have scored more but we got the win and we'll kick on from here."

MAN OF THE MATCH
In a wide left role, Anthony Martial's pace and directness caused problems all night. An eighth goal of the season and an assist for the winner – no wonder the boss was pleased with his contribution.

#MUFC get 2016 off to the perfect start thanks to goals from Anthony Martial and Wayne Rooney.

Posted by RyanGiggs.cc on Saturday, January 2, 2016