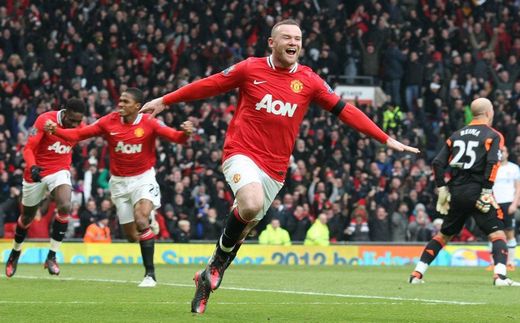 Two goals in four second-half minutes from Wayne Rooney took United to the top of the Barclays Premier League table after a predictably fractious, but thoroughly deserved victory over Liverpool at Old Trafford.

United's top scorer thundered home a close-range volley and tucked away a neat finish after Antonio Valencia had caught Jay Spearing in possession, bagging the decisive pair within five minutes of half-time.

The champions might have done more from promising positions in a one-sided second period, and were given a nervy ending to the game when Luis Suarez tucked away a late consolation strike for the visitors.

Having watched his side roar back to take a point at Stamford Bridge last weekend, Sir Alex Ferguson made a solitary change to his starting line-up; bringing Paul Scholes into central midfield and shifting Ryan Giggs to the left flank at the expense of Ashley Young.

Of greater pre-match interest was the visitors' selection. Suarez started for the first time since receiving an eight-game ban for racially abusing Patrice Evra, and unexpectedly shunned the United skipper's offer of a pre-match handshake.

The two seemed destined for closer contact within 30 seconds of the first whistle, until Rio Ferdinand raced in to clear the loose ball and found himself trapped in their collision course. Having been clattered by his captain, Ferdinand received treatment before continuing.

The visitors' early approach centred around attacking Evra. Glen Johnson was a continual outlet, driving down the right flank wherever possible, and the right-back curled a left-footed effort just wide of David De Gea's right-hand post after 10 minutes.

United's first test of Reina followed the same blueprint, as Rafael latched onto a pass from Antonio Valencia and cut back onto his left-foot. The Brazilian's half-hit shot was neither testing enough to worry Reina, nor gentle enough for the lively Welbeck to convert.

After Liverpool's bright start, gradually United began to boss possession, and put together some neat, intricate passing as the champions sought to pick their way through the visitors' packed central areas.

On the half hour, once such piece of play should have borne fruit. Scholes capped a slick move by spreading the ball to Giggs, but could then only head the Welshman's cross straight at Reina, who instinctively parried the ball away and preserved parity.

Evra rose to meet Valencia's cross at the far moments later, but could only power a far more difficult chance over Reina's crossbar as United turned the screw. Liverpool's response was to tighten their own approach, pressing the Reds all over the field and shutting down outlets.

Dalglish's men even ended the half with a rally, as Gerrard's shot was deflected over and Martin Skrtel's shot from the resultant corner also cleared the crossbar, but the atmosphere was cranked up just before the interval when Suarez prepared to stride through on goal.

The Uruguayan's run was halted by an excellent, last-ditch challenge from Ferdinand, though Suarez's animated protests made his feelings clear, as did his decision to continue his dispute after the half-time whistle.

While words were reportedly exchanged between both sets of players in the Old Trafford tunnel, it was the hosts who landed the first telling blow of the game, within two minutes of the restart.

Giggs' right-wing corner was inadvertently flicked on by Jordan Henderson as he jumped with Michael Carrick, and the ball fell perfectly for Rooney to thunder home a volley from six yards out.

Old Trafford erupted, and the primal roar had barely dipped before United's lead was doubled. Valencia's hustle provoked panic in the Liverpool ranks, and Jay Spearing duly presented the ball to the Ecuadorian, who fed Rooney for a simple, left-footed finish between Reina's legs.

Rooney should have notched his treble before the hour-mark. Valencia again caused havoc on the right, and his ball inside was daintily ignored by Scholes, a fleeting piece of inspiration which foxed Rooney, who failed to control the ball and could only stab wide from close range.

Kenny Dalglish sought to inspire a fightback with the introduction of substitutes Craig Bellamy and Andy Carroll at the expense of Spearing and Stewart Downing, but still United retained control - and might have created further distance between the sides when Welbeck could only scuff a shot at Reina.

Just as the Reds appeared to be comfortably closing out the win, however, the visitors hit back. Charlie Adam, another substitute, whipped in a dangerous set-piece which dipped, hit Ferdinand and fell perfectly for Suarez to poke home a simple finish.

United looked for an immediate retort as Scholes neatly released the non-stop Welbeck, but the striker could only blaze a left-footed finish over the bar from just inside the Liverpool area.

The reduced arrears understandably set jitters coursing through the Old Trafford stands, and Liverpool's increased urgency brought them one more chance. For the second week in a row, howeve, De Gea would prove United's injury-time hero.

Bellamy's free-kick was only headed clear as far as Johnson, whose left-footed effort from distance looked to be arrowing into the roof of the net until De Gea spectacularly finger-tipped the ball over the crossbar.

Thereafter, the Reds saw out the remaining moments encamped in the visitors' half, and the final whistle met jubilant celebrations from United players and supporters alike - especially Evra, whose Stretford End revelling provoked angry responses from the beaten visitors.

The Evra-Suarez spat was only, however, the sub-plot. In the bigger picture, United are back atop the Barclays Premier League table and firmly in the hunt to retain the domestic crown worn with such distinction for the best part of two decades.

David De Gea
The Spaniard could’ve done little to prevent Luis Suarez’s late consolation and ultimately had very little to do, other than make a couple of comfortable saves from two speculative Glen Johnson strikes.

Rafael
In spite of his diminutive frame, United’s young Brazilian won several key headers and showed off his impressive aerial ability during a competent display at right back. As ever, he offered a reliable outlet for Antonio Valencia and showed good intent to get forward.

Rio Ferdinand
The Reds veteran overcame an early neck injury following an awkward collision with Patrice Evra to shepherd the defence against Liverpool’s disjointed attack. Also made a perfectly timed challenge to deny the counter attacking Suarez in the first half.

Jonny Evans
Stood tall as an impenetrable force at the back in what was arguably his finest performance in red, stepping impressively into the absent Nemanja Vidic’s shoes with a display of the highest quality.

Patrice Evra
With the world’s media watching, United’s stand-in captain showed little sign of pressure during a typically solid outing at left back. His very presence on the touchline was also greeted by rapturous applause as Old Trafford lent its support towards the under-fire Frenchman.

Antonio Valencia
ManUtd.com’s player of the month for January continued his fine form on the wing, running Jose Enrique ragged before dispossessing Jay Spearing to supply the pass which set up Wayne Rooney’s second goal of the game.

Paul Scholes
Another classy performance from the returning legend, whose quarterback style passing was central to all of United’s attacking endeavours. The 37-year-old even made a couple of perfectly timed tackles to rob the opposition of possession.

Michael Carrick
Typically assured on the ball, the Reds pass-master seemed to revel alongside Scholes in the middle of the park and also showed his defensive qualities with a couple of important blocks and tackles. A late trip on Luis Suarez did warrant a second half yellow card from the referee, though.

Ryan Giggs
The Welshman, now just one game shy of making 900 club appearances, celebrated his contract extension with a steady performance on the wing, cutting inside on several occasions to provide a constant threat from the left. His corner also led to Rooney’s opener.

Wayne Rooney
Once again, the England international fulfilled his boyhood dream of scoring against Liverpool with a quickfire double shortly after the break during a tireless display up front. The hat-trick was unfortunately not on the cards, though Wazza will be pleased with his haul.

Danny Welbeck
Showed great energy and ran the channels superbly, allowing United to dictate possession and territory throughout the match. Was unlucky not to score in the first half with a couple of dragged efforts but was a definite man of the match contender.