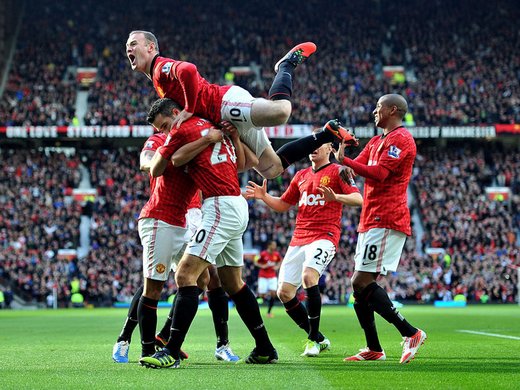 Robin van Persie was inevitably on the scoresheet as Manchester United beat his former club Arsenal to record a fourth consecutive win in the Barclays Premier League.

The Dutchman needed less than three minutes to make the away fans' worst fears come true, lashing in his tenth strike for the Reds after a mistake by Gunners centre-back Thomas Vermaelen. The Arsenal defence was found wanting again early in the second period when United captain Patrice Evra claimed a rare goal with a free header from Wayne Rooney's cross following a corner.

Sandwiched between the two notches was a missed penalty from Rooney, while Arsenal had Jack Wilshere sent off for a second bookable offence long before Santi Cazorla pulled back a consolation goal in the fourth minute of injury time - thus denying the Reds only a third clean sheet of the league campaign.

Both sides fielded unchanged starting XIs from the ones that secured wins in their last league outings, at Chelsea for United and at home to QPR for the Gunners.

Much of the pre-match talk had been about van Persie who was facing his former team for the first team since his summer move to Old Trafford. He certainly wasn’t given the friendliest of receptions from the visiting supporters, but that had absolutely no effect on the Dutchman who got United off to the most perfect of starts after just three minutes.

A lovely backheel from Antonio Valencia found Rafael down the right wing whose low cross was not cleared properly by Thomas Vermaelen. It fell to van Persie, just inside the box, who made no mistake with the first-time finish, blasting low into the corner. The striker, aware he was in close proximity to the Arsenal fans, kept his celebrations muted as he was engulfed by his jubilant team-mates.

Van Persie went close to doubling his and United’s tally on 21 minutes when Rooney put him through. This time the Dutch forward saw his angled effort palmed away by the Gunners' Italian goalkeeper Vito Mannone.

Arsenal went straight up the other end and forced David De Gea into action for the first time in the game with the Spaniard diving down low to punch away Aaron Ramey’s dangerous cross from the right.

United were looking rampant in attack and soon after Rooney, well found by Michael Carrick, saw a drilled shot from inside the box brilliantly saved by Mannone, and in the passage of play that followed van Persie headed Young’s centre straight at the Gunners stopper.

While Arsenal had offered little from open play, they found themselves with a good opportunity from a corner seven minutes before the break, but it was wasted by the unmarked Olivier Giroud who powered a header over De Gea’s crossbar as he rose to meet Cazorla’s set-piece.

Cazorla was involved at the other end on the stroke of half-time when he was penalised for handling Young’s cross inside the box. Referee Mike Dean had no hesitation in pointing to the spot, but Rooney wasted the opportunity as he fired his penalty wide of Mannone’s right-hand post.

Another poor miss from the Reds followed almost immediately after the restart. Vermaelen was caught in possession by van Persie who raced down the right and crossed for Valencia, who had temporarily switched positions with the Dutchman, but the unmarked Ecuadorian failed to connect properly from six yards out and skewed the ball horribly wide.

Arsenal’s hat-trick hero from the incredible Capital One Cup comeback against Reading, Theo Walcott, entered the fray in place of Ramsey on 52 minutes. He slotted in on the right wing, but it was from the opposite side that the Gunners created their first opening of the second period two minutes later. Cazorla found space before sending a low centre towards Giroud who turned and fired just wide of De Gea’s right-hand post.

Sir Alex instructed a change in United’s midfield on the hour with Anderson replacing Cleverley, who was walking a disciplinary tightrope after being booked in the first period and escaping a second yellow after a poor challenge on Wilshere minutes earlier.

You wondered if a second United goal would ever come when van Persie found himself in acres of space, clean through and onside, but the Dutch international saw his shot tipped round the post by Mannone. 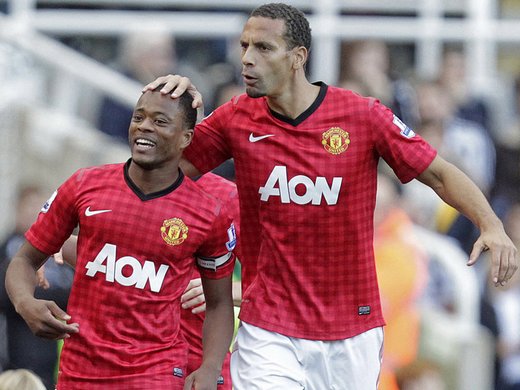 The Reds were not to be denied on 67 minutes though. Rooney played a short corner to Young before receiving the ball back and curling an inviting cross into the box where Patrice Evra, of all people, rose to head past Mannone.

It was no more than Sir Alex’s men deserved and indeed United were further boosted two minutes later when the visitors were reduced to ten men as Wilshere saw red after collecting his second yellow for treading on Evra’s foot.

Van Persie and Anderson had further goals ruled out for offside, but even though Cazorla scored for Arsenal with the last kick of the game, the Reds were worthy recipients of three priceless points and top place, if only temporarily, in the Barclays Premier League.