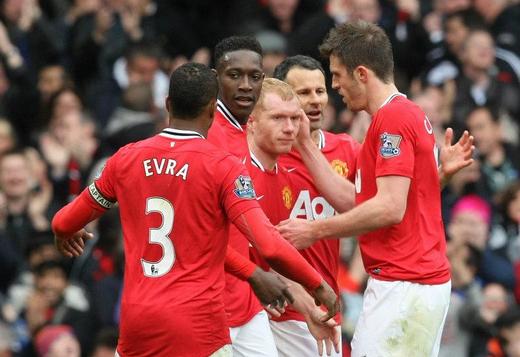 Another game chalked off, another three points closer to the Barclays Premier League title, but another nervy and controversial afternoon for the champions against 10-man Queens Park Rangers.

Wayne Rooney broke the deadlock with a 15th-minute penalty before Paul Scholes assured the Reds of victory midway through the second period, but Rangers could rightly feel aggrieved of the award of Rooney's spot-kick.

Not only was it given for a foul on Ashley Young, who was clearly offside, but referee Lee Mason immediately deemed Shaun Derry's questionable offence worthy of a red card, depriving the visitors of their captain.

Rooney's conversion merely reinforced Rangers' defensive resolve, and Mark Hughes' side battled commendably to frustrate the Reds. A host of spurned chances cranked up the jitters inside Old Trafford, before Scholes smashed home a 25-yard effort with just over 20 minutes remaining.

Sir Alex Ferguson made just two alterations to the side which started against Blackburn, six days earlier; Chicharito and Phil Jones made way for Danny Welbeck and Ashley Young, with Wayne Rooney moving forward to partner Welbeck in attack.

The strike duo combined for the game’s first attempt, with help from Clint Hill. The Rangers defender caught Welbeck with a heavy challenge, 25 yards from goal. Rooney’s curling free-kick appeared bound to test Paddy Kenny, until it clipped Anton Ferdinand and looped wide.

Rooney was given an opportunity from similar range five minutes later, albeit from the opposite side of the box. This time the United striker cleared the wall, only for Kenny to tip the ball wide at full stretch.

In-between those set-pieces, the visitors were scarcely given a touch of the ball. Instead, they happily surrendered possession and ground, allowing United to try and pick a path through a thicket of blue-and-white-hooped undergrowth.

It took one particularly piercing through-ball from Rooney to do so, after quarter of an hour, but also a sizeable slice of fortune, as the referee’s assistant failed to spot Young, the recipient of the pass, clearly loitering in an offside position. Shaun Derry attempted to halt the winger’s progress and Young buckled under the contact – giving referee Lee Mason a decision which he took quickly.

The official immediately pointed to the spot and brandished a red card towards the visiting skipper. QPR could contest the severity of the punishment on a variety of levels, and their grievances were compounded when Rooney tucked the spot kick under Kenny’s dive to crank up the volume inside Old Trafford.

Rangers went into the game in a perilous position, sitting outside the Premier League’s relegation zone on goal difference alone. Having fallen behind in scoreline and personnel, it was little surprise that they remained reluctant to press forward. On the rare occasions they did, the unpredictable Adel Taarabt was invariably involved.

The skilful Moroccan almost levelled the scores with a 35-yard effort which looped up off Michael Carrick and was dipping just under David De Gea’s crossbar, until the Spaniard chose his safest option and finger-tipped the ball over for a corner.

United continued to boss the game, but the visitors defended manfully. Rooney looked certain to double his tally when he was picked out by Valencia, but Clint Hill made a superb, diving block. It took similar last-ditch action from Jonny Evans to thwart Taarabt from close range after Rafael had dallied in possession.

The visiting supporters vented their ire at every decision which went against them – understandably so, after the controversial penalty award – but it was the home contingent left frustrated in the latter stages of the half as Valencia tumbled after having his shirt tugged by Taye Taiwo, before Welbeck’s shot struck Anton Ferdinand on an elbow.

Any air of frustration was hardly helped by the visitors’ steadfast resistance to the incessant United pressure. Rangers neutralised the threat of Young and Valencia commendably, leaving the Reds with a packed central area to negotiate. The midfield axis of Carrick and Scholes, along with Rooney, who repeatedly dropped deep, passed and probed patiently, but Scholes demonstrated the growing irritation when he arced a 30-yard shot narrowly past Kenny’s top corner in the final minute of the first period.

Within two minutes of the second half's resumption, there was another offside call for the officials to consider. This time, the referee's assistant flagged to correctly rule out Welbeck's tap-in after impressive wingplay from Valencia. Moments later, on the opposite flank, the striker curled over the bar after an impudent back-heel from Young had teed him up.

Then, after Kenny had sharply fielded a low, drilled effort from Rooney, the visitors enjoyed their first spell of sustained pressure with a pair of corners. On the break from the second of them, Scholes failed to get enough swerve on his 20-yard half-volley to hit the target.

The veteran midfielder found his range, however, in releasing Rafael with a lovely, disguised pass. The Brazilian had all the time he wantd to pick his spot, but saw his low effort somehow turned onto the top of the post by Kenny. The Rangers goalkeeper was then required to turn away a pair of Welbeck efforts as United's frustration snowballed.

Sir Alex Ferguson's response was the introduction of Ryan Giggs at the expense of Young, but it was the Reds' other old stager who made the victory safe. Taarabt's heavy control presented the ball to Rafael, who in turn found Scholes, who advanced and belted a low, 25-yard effort past Kenny.

The midfielder's brutal effort was almost bettered by his central cohort shortly afterwards as Carrick unleashed a 30-yard scorcher which thundered against the inside of Kenny's post and rebounded to safety. By that point, Scholes had made way for Tom Cleverley, while Phil Jones had replaced Rafael. Mark Hughes, meanwhile, introduced Tommy Smith, Shaun Wright-Phillips and DJ Campbell for Taarabt, Samba Diakite and Jay Bothroyd as he sought to salvage something from the game.

It was United who came closest to bagging the third goal of the afternoon, however, as Welbeck fashioned space for himself on the edge of the area and dragged his shot narrowly wide. Cleverley also had a poked effort deflected wide via Nedum Onuoha's knee.

Those close-calls would not prove costly, however. The outcome had rarely been in doubt since Rooney's contentious opening goal, after which the Reds closed out the victory in total comfort to remain on course for a successful defence of the Barclays Premier League title.

David De Gea
A virtual spectator throughout - understandably, given the visitors' shortage of numbers - but dealt with Adel Taarabt's looping first-half shot well. Good job he was wearing gloves on a cold afternoon.

Rafael
Spent the vast majority of his time on the attack in support of Antonio Valencia, but was thankful for the last-gasp intervention of Evans after he had gifted possession to Taarabt. Perhaps should have done better with his one-on-one against Paddy Kenny.

Jonny Evans
Once again, superb. Confident, powerful, first to every ball and continues to read games as well as any defender around. A flawless afternoon's work from the Northern Ireland international.

Rio Ferdinand
Given seldom little to do in defensive terms, other than ferry possession around as United built from the back. Carried the ball forward during the second period in a bid to coax the visitors towards him - a ploy which regularly succeeded.

Patrice Evra
Enjoyed a keenly-contested battle with Jamie Mackie and made some key interceptions on the rare occasions that the visitors threatened. Always available in support of Young and latterly Giggs.

Antonio Valencia
Continued where he left off against Blackburn: driving United forward and always on the front foot. Edged a physical battle with Samba Diakite and sent countless inviting balls into the Rangers box.

Michael Carrick
Just the man required to dictate tempo and possession. Looked as impressive as ever as he patiently probed for openings in Rangers' well-drilled defensive banks, and was desperately unlucky to see his scorching effort thud against the upright.

Ashley Young
Profited from the linesman's generous early call, and was a constant thorn in QPR's side all afternoon. Sent in a string of inviting deliveries before being replaced by Giggs.

Wayne Rooney
Had a difficult job of dropping deep into congested areas to try and find gaps in the visitors' massed ranks, but he did so for the opening goal - offside or not - and duly converted the penalty for his 29th goal of the season.

Danny Welbeck
One of those afternoons in front of goal for the youngster, where he might have played for hours without scoring. More pertinently, however, he never let his head drop and remained a pain in the visitors' collective backside.

Ryan Giggs (on for Young, 61)
Brought on to add a little more guile to the Reds' probing, and his introduction coincided with the Reds making the game safe.

Phil Jones (on for Rafael, 74)
Bright and alert, and another example of his versatility by slotting in seamlessly at full-back after starting in midfield on Monday.

Tom Cleverley (on for Scholes, 74)
An eye-catching cameo from the youngster, who looked totally unfazed at having to keep the ball moving amid clusters of opponents.