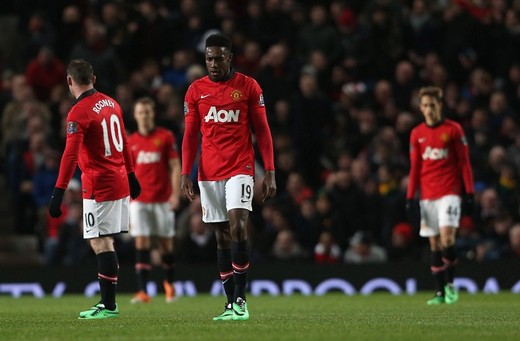 Manchester United slipped to a fourth home defeat of the season to fall behind Tottenham in the Barclays Premier League table.
Emmanuel Adebayor and Christian Eriksen did the damage in a 2-1 reverse despite Danny Welbeck giving David Moyes' side hope seconds after the visitors had doubled their lead in the 66th minute.
The Reds produced a high-tempo start with Welbeck twice almost released on goal and Hugo Lloris fortunate when a Chris Smalling drive squirmed under him but wide of his left-hand post. For all the hosts' impressive play, a warning was supplied by Aaron Lennon as he latched onto a Roberto Soldado pass to force David De Gea to save with his legs.
Spurs continued to threaten on the break and took the lead when Adebayor outjumped Smalling to plant a precise header into the corner of the net following Christian Eriksen's cross from the right. Soldado almost added a second but could not convert a Lennon centre.
After Danny Welbeck had a penalty appeal rejected, David Moyes threw on Shinji Kagawa and Javier Hernandez but the home side fell further behind when Wayne Rooney and Antonio Valencia, who had shifted positions to accommodate the changes, were unable to deny Lennon and Eriksen respectively with the Dane's stooping header beating De Gea.
It prompted an instant response from the restart as Welbeck raced onto an Adnan Januzaj pass to calmly dink the ball over Lloris to crank up the volume at Old Trafford. Januzaj saw a shot skip just wide and Spurs were forced to defend for their lives in the closing stages. Substitute Ashley Young was clearly caught by a high tackle by Lloris but again referee Howard Webb decided against pointing to the spot with Lloris also saving well from Rooney and Nemanja Vidic before the Serbian headed over in injury time. 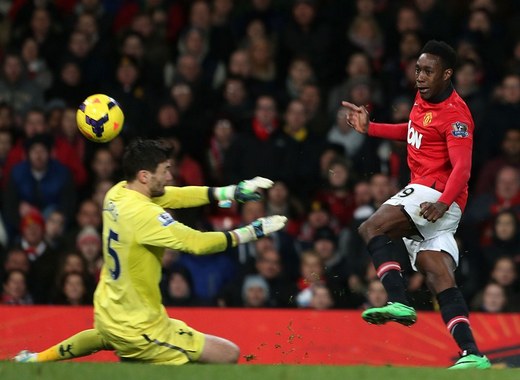 The Match Having started the game so well, United were sunk by Spurs and their slick counter-attacking tactics. Emmanuel Adebayor headed home in the first half before Christian Eriksen dived to nod an Aaron Lennon cross past David De Gea on 66 minutes. Danny Welbeck immediately pulled one back and the Reds fought hard to produce a comeback, but there was no way past Hugo Lloris for a second time.
The Goal Having conceded a second goal, it took a real show of character for the Reds to respond straight from the restart, as had happened when Shinji Kagawa scored in this fixture last season. Adnan Januzaj threaded a ball through to Welbeck and his composed finish bore the hallmark of somebody with five goals in his last five games.
Star men Welbeck deserved his goal and was a threat from the first whistle when running in behind centre-backs Michael Dawson and Vlad Chiriches. Januzaj tried to produce some sparkle with an entertaining and tireless performance on both flanks, and he was unlucky to bend a shot just wide with the score at 1-2.
Sub-plots Adebayor has been the scourge of Old Trafford in the past and has now scored on his last three visits to the Theatre of Dreams, justifying Tim Sherwood's decision to bring him in from the cold. In truth, United needed a positive result to close the gap on the top sides and this was a disappointing return to Old Trafford after some good wins on the road.
Opposition Despite playing two out-and-out strikers in Roberto Soldado and Adebayor, Spurs' intentions were clearly to play on the break and utilise Aaron Lennon's pace on the right. It worked for the North Londoners and the second goal was a real sucker punch. Dawson, in particular, mopped up many of the United attacks while Adebayor was a great physical presence up front before being taken off on a stretcher.
Move of the match Only four minutes had elapsed when Wayne Rooney drilled a crossfield ball to Antonio Valencia who took two quick touches to feed the on-rushing Chris Smalling. Hugo Lloris scrambled the full-back's shot behind but it was an incisive move that summed up United's bright start - sadly David Moyes' men couldn't build on it.
In the stands Any post-celebration hangovers were quickly shaken off by the hosts' rapid start and there were periods of great noise from the crowd, particularly when Welbeck's strike was followed by a frustrating wait for Adebayor to leave the field. The home fans were clearly upset referee Howard Webb refused to point to the spot after penalty appeals from Welbeck and Ashley Young in the second half.