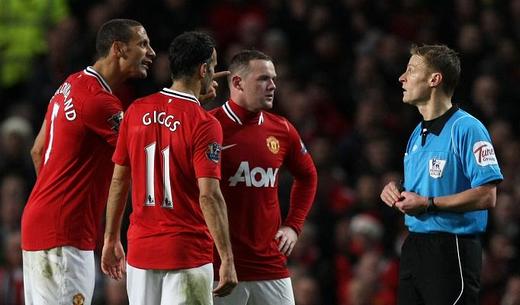 A controversial penalty equaliser by Demba Ba denied Manchester United victory in a hotly-contested clash with high-flying Newcastle United as Javier Hernandez also had an injury-time effort ruled out for offside.

Rio Ferdinand's tackle on Hatem Ben Arfa in the 63rd minute looked a clean one but the assistant referee had other ideas and Mike Jones pointed to the spot. It cancelled out Javier Hernandez's opener, his first goal at Old Trafford this term, and the Tynesiders held out despite playing the final 12 minutes with 10 men when Jonas Gutierrez was sent off.

Sir Alex opted for experience in his starting XI with Ryan Giggs in central midfield alongside Michael Carrick and the Reds started quite promisingly with Hernandez having three early sights of goal. Unfortunately, the Mexican was unable to find a finishing touch after Wayne Rooney linked well with his strike partner.

Newcastle mustered a decent attempt of their own when Ben Arfa's scooped pass released Ba but the Magpies' top scorer's volley was comfortably saved by David De Gea. Ben Arfa needlessly berated Rooney, earning a yellow card, after the striker was penalised for a foul on Fabricio Coloccini but this was a rare first-half flashpoint as the teams tried to contend with the sweeping Manchester rain.

Another clear-cut opportunity did not arrive until the half-hour mark when Nani, who had switched flanks with Ashley Young, fed Hernandez with  a slide-rule pass but the Mexcian striker fired over the top. United seemed to find some urgency as, seconds later, Giggs touched on a Fabio cross which was superbly dealt with by Krul, palming it away to safety with Hernandez lurking and hoping for to pounce on the rebound.

Nani and ex-Reds winger Gabriel Obertan traded shots over the top and the latter carried some threat as the half wore on, with Patrice Evra requiring the assistance of Nemanja Vidic in the middle to deal with one raid and then blocking a cross from his fellow countryman with his arm, although a penalty would have been extremely harsh.

The final attack of the first 45 minutes again carried plenty of potential but Hernandez made a hash of Young's pass by missing his kick, after Rooney was involved in the build-up, meaning the teams went in goalless at the break.

The Reds edged in front at the start of the second half after Hernandez was fouled by Steven Taylor. Rooney's free-kick hit the wall but he volleyed it back with his left foot and Steven Taylor's attempted clearance cannoned off Hernandez and into the net. It was a slice of luck but the Reds should have extended the lead soon afterwards when Fabio worked a clever one-two with Hernandez but hammered an inviting opportunity off target.

The Magpies were clinging on for dear life as Young fizzed a shot inches wide following fine play by Evra. However, Newcastle rallied and De Gea had to make a stunning save to keep out Fabricio Coloccini after the hosts were caught napping at a corner. The relief was only temporary, however, as Ferdinand's fine tackle on Ben Arfa led to the controversial penalty. Up stepped Ba to send De Gea the wrong way and level the scores - despite the champions' protests. The Reds' frustration with the officials grew, with the manager upset at one wrong call, and the bookings mounted for the Magpies as they resorted to some desperate tackles.

After Rooney had a shot off target, Young really should have restored the lead but, under pressure from Steven Taylor, was unable to convert Nani's excellent assist with the goal gaping. Gutierrez was shown a second yellow card for a rash challenge on Nani 12 minutes from time, which sparked an inevitable late onslaught from Sir Alex's team.

Krul stood firm with a brilliant, instinctive save to keep out Vidic's flying header and then tipped away Evra's left-footed effort. When the keeper was beaten, Young's low drive thudded back off a post and Simpson made an unbelievable goalline block to stop a Hernandez header. Substitute Federico Macheda could only nod a Giggs centre wide with the Reds laying siege to the opposing goal and Vidic was unable to scramble home a mis-hit shot by Ferdinand as Newcastle held out for a valiant point that left everybody of a Red persuasion totally frustrated - despite Hernandez tucking home a Giggs cross in the dying seconds. The flag went up, almost inevitably, and the chance of three points vanished.

David De Gea
Made a world-class save to deny Fabricio Coloccini after also thwarting Demba Ba in the first half. Had no chance with Ba's penalty and handled every cross with immaculate ease and authority.

Fabio
A tigerish display full of passion that should have resulted in a goal, only for his finish to lack composure after playing a one-two with Javier Hernandez. Sent the cross over for Ryan Giggs' first-half opportunity and made a couple of snappy challenges on Jonas Gutierrez - one of which earned him a yellow card.

Nemanja Vidic
Supreme in the air and managed to nullify most of Newcastle's attacking intentions. Made one thumping, but fair, challenge on Ba and forced a superb save out of Tim Krul with a diving header.

Rio Ferdinand
Outmuscled Ba on numerous occasions but also dribbled past him too, showing silk and steel. Blocked a Gabriel Obertan drive and stopped a dangerous Hatem Ben Arfa pass at the start of the second half. But his most telling contribution was what looked a fair sliding tackle on the Frenchman that resulted in the controversial penalty.

Patrice Evra
With Obertan's presence possibly restricting his attacking intentions, the shackles were released after the second half and he was much more involved. Blocked one Obertan cross with his arm from point-blank range but a penalty would have been harsh. His best moment was setting up a chance for Ashley Young and he made another superb pass down the line to the winger soon afterwards. Drilled in one shot that forced a diving save out of Krul late on.

Nani
Failed to see much of the ball in the opening exchanges, having to come deep to get involved. A switch of flanks saw him set up a chance for Hernandez and he curled a shot over the bar after working a short corner with Ryan Giggs. Returned to the right to run at the visiting defence and carved out clear openings for Wayne Rooney and Young before being fouled by Jonas Gutierrez that led to a red card for the Argentinian.

Michael Carrick
A strong, disciplined performance which featured some tough tackling as he was a vital figure throughout. Kept the ball rolling in midfield and there's little doubting he's in good form at the moment.

Ryan Giggs
A neat backheel early on showed his class and this was a composed display in the midfield engine room. Some driving runs lifted the crowd and showed he is still able to glide past players effortlessly with his wonderful balance. A flicked shot forced a great stop out of Krul in the first half and he set up Hernandez for the last-gasp disallowed goal.

Ashley Young
Really struggled to make his mark in the first half as United's wide players were unable to get into the game. The second period was a different story as he smashed a shot inches wide from an Evra pass and saw a cross intercepted by Krul with Hernandez waiting for a tap-in. Was unable to steer into a gaping net under strong pressure from Steven Taylor and was out of luck when his drive smacked a post late on.

Wayne Rooney
Instantly involved and kept his cool despite Ben Arfa's attempts to provoke him following a challenge with Fabricio Coloccini. A controlled volley with his left foot led to the goal and he headed a Young corner over the top but most of his work came deeper on the pitch as he tried to probe with some intelligent passing.

Javier Hernandez
Had a number of shots throughout, firing a Nani pass over in the first half, and playing high up on the Newcastle backline. Netted for the first time at Old Trafford this season when Steven Taylor's clearance cannoned off him but he was caught offside on a few occasions, inevitably given his advanced position, and most crucially when touching home deep into injury time.

Federico Macheda (for Evra, 88)
Did well to try and make things happen despite his limited time on pitch and the fact he's only just returned from injury. Headed his only chance wide.

Chris Smalling (for Fabio, 90)
No time for any impact.