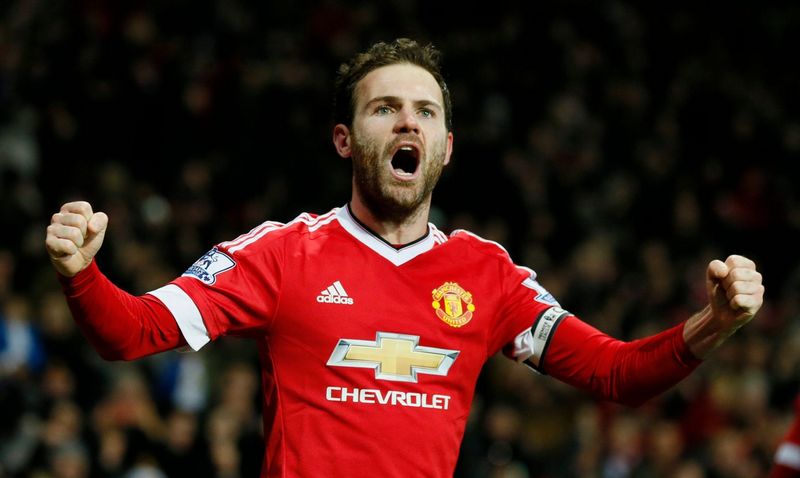 A late free-kick from Juan Mata gave Manchester United an important victory over Watford on Wednesday night.
The midfielder, named captain ahead of the game in the absence of Wayne Rooney, Michael Carrick and Chris Smalling, stepped up to curl home a delightful effort on 83 minutes to settle a hard-fought contest at Old Trafford.
Anthony Martial was named in a youthful starting line-up after recovering from a recent hamstring injury, while in-form striker Marcus Rashford retained his place up front. 21-year-old midfielder Joe Rothwell was named among the substitutes, the latest on a long list of youngsters to appear in a first-team squad this season.
Louis van Gaal’s men went into the clash on the back of Sunday’s confidence-boosting victory over Arsenal, but it was the visitors who started on the front foot, looking early to Troy Deeney and Odion Ighalo.
It was United, though, who almost took the lead on seven minutes, as Daley Blind’s cross was sliced towards his own goal by Jose Holebas, but Heurelho Gomes was alert to the danger. The Reds also might have scored when Ander Herrera’s deep cross reached an unmarked Martial at the far post, but the Frenchman couldn’t direct his header on target.
Watford were eager to show why they have earned so many plaudits since winning promotion from the Championship, and created an opening of their own through Ighalo, who found half a yard before seeing his goal-bound effort deflect wide. United meanwhile were yet to settle into any sort of rhythm, but a superb challenge from Tim Fosu-Mensah – making his first start for the club – sparked some life into the Reds. 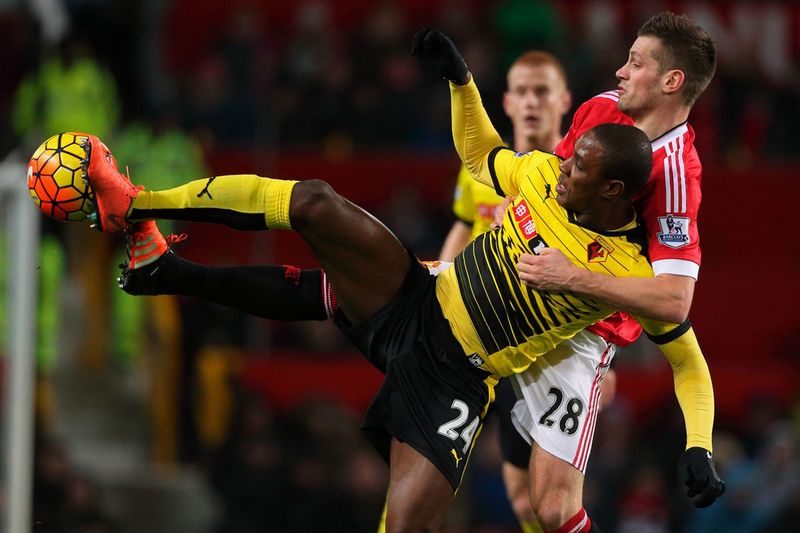 Van Gaal’s men went within inches of taking the lead on 19 minutes when Mata’s free-kick was cleared as far as Morgan Schneiderlin, who hit a dipping volley from 25 yards that dropped just wide of Gomes’ right-hand post.
With both sides looking to attack but lacking in end product, the Hornets again went close just before the half-hour mark. Again, Ighalo’s clever movement bought the striker some space in the area, but his shot bobbled narrowly wide with De Gea rooted to the spot. 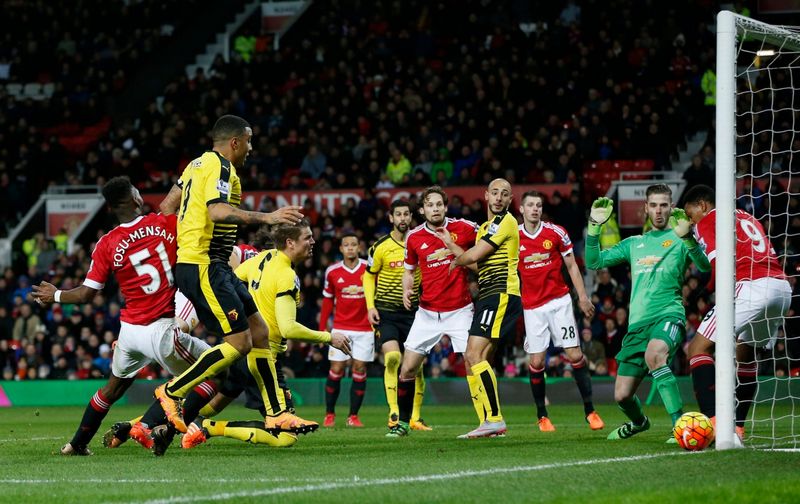 The best opportunities of an closely-contested half came shortly before the break, and unsurprisingly fell at the feet of Ighalo. The Nigerian raced onto a misplaced header and into the box, but De Gea stuck out a leg to keep the scores level, before the goalkeeper was called into action once more on 42 minutes. Ighalo again latched onto a loose pass, but the Spaniard dived at his feet to deny what should have been the opener, and in turn earn the praise of Watford boss Quique Sanchez Flores, his former coach at Atletico Madrid, as the teams walked down the tunnel.

POSSESSION: United 64% Watford 36%
SHOTS (ON TARGET): United 6 (1) Watford 8 (3)
CORNERS: United 3 Watford 3
The second half began as the first had ended, and Watford were almost celebrating a goal just three minutes after the interval. Etiene Capoue picked up the ball in midfield and unleashed a fierce strike which zipped just over De Gea’s crossbar. Sebastian Prodl went even closer for the visitors minutes later, when his header was cleared off the line by Rashford following a Watford corner.
The Hornets were on top, and might have taken advantage through Ighalo 10 minutes into the second period, as the striker turned Fosu-Mensah and curled a shot past the post. They were almost punished on the hour–mark though, as Mata stung the palms of Gomes from the edge of the area, in United’s first meaningful attack of the half.
The Reds were growing in confidence and, urged forward by the fans, created two great openings in quick succession. First, Rashford showed quick footwork to get to the byline and drove a low cross into the area, before Mata’s curling effort flew past the diving Gomes and ended up well wide. 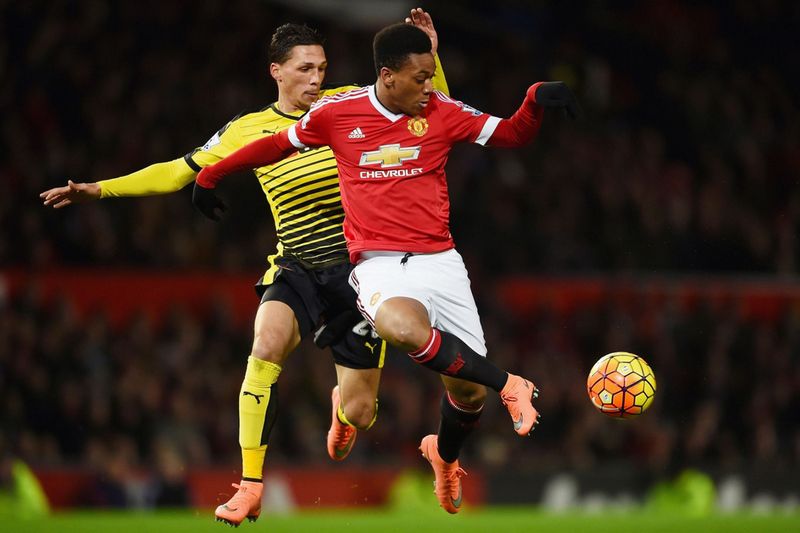 Watford were quick to remind United that they possessed an attacking threat, and had a couple of chances of their own as the game entered its final stages. As the Hornets pressed, Blind’s attempted clearance ricocheted off Fosu-Mensah and into the path of Nordin Amrabat, but the substitute couldn’t apply the finish. From the corner that followed, Prodl raced in at the back post and headed inches wide, in a sequence that summed up the game to that point. 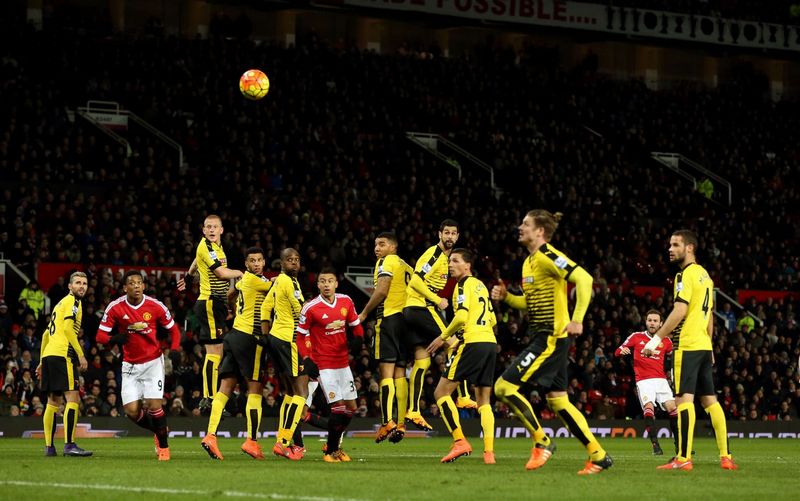 The all-important goal finally came with seven minutes remaining, as Miguel Britos brought down Martial on the edge of the area. Mata stepped up to convert the resulting free-kick, bending a beautiful effort over the wall and beyond the reach of Gomes. The Spaniard was withdrawn late on, to a much-deserved ovation from those inside Old Trafford, with his goal earning the Reds a vital three points.

“We are fighting. In the fight, we've played a fantastic match against Arsenal, and I believe against Midtjylland we also played very well. The win against Shrewsbury Town was the start of the run of victories; I think the youngsters have given us a lot of spirit, and now when you see the dressing room full of joy with all the players laughing, it’s beautiful to see. I think that shall also accelerate the recovery of the players.” - Louis van Gaal.

"I think it was very important to win today. It wasn't the prettiest game we've played all season, but especially because our rivals didn't win their games, it's a massive victory for us. That's why we celebrated the way we did." - Juan Mata.

A late free-kick from Juan Mata gave #MUFC an important victory over Watford.

Posted by RyanGiggs.cc on Wednesday, March 2, 2016