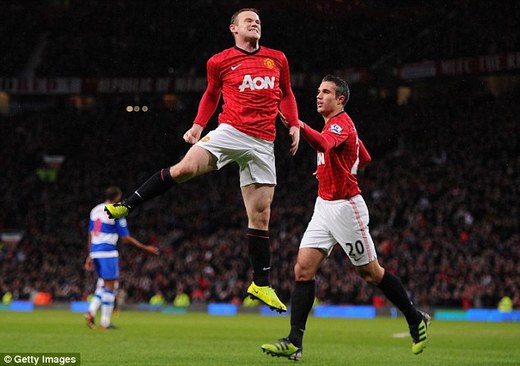 Manchester United achieved a most commanding position yet in 2012/13 by edging 15 points clear of Manchester City at the top of the Barclays Premier League in what may prove to be a telling weekend in the title race.

The Reds’ 1-0 win against Reading provided little drama – precisely what Sir Alex would have wanted – and although the precarious winning margin never truly offered a feeling of comfort for United, Wayne Rooney’s scuffed, deflected first-half strike shows that Sir Alex’s men can win ugly as a means to an end.

This wasn’t an epic encounter of which to regale the grandchildren, but then it never needed to be. Manchester City’s 2-0 defeat to Everton earlier in the day presented an opportunity not to be missed heading into the international break.

Sir Alex made eight changes to the team that drew 2-2 with Chelsea in the FA Cup last Sunday. He made clear the impact that mental fatigue had on his squad after the 10-man defeat to Real Madrid in the Champions League, and with the forthcoming international break and all the injury perils that entails, he tailored his team to guard freshness and fitness.

Four of the starting eleven – Ryan Giggs, Anderson, Nemanja Vidic and Alexander Büttner – aren’t involved for their countries in the next two weeks. Rafael, Patrice Evra – neither were included - and Michael Carrick were all owed rests after their recent efforts, although the latter came on for the final 16 minutes.

United paired Rooney and van Persie up front for only the fourth time in 2013, while Danny Welbeck and Ashley Young patrolled the right and left flanks respectively, with Giggs and Anderson paired in central midfield.

Reading’s recent dismissal of Brian McDermott was a controversial step, but a managerless team sometimes conjures inspiration and despite being in 19th place in the league and seven points adrift of safety, their 4-3 league defeat and 2-1 FA Cup loss against the Reds earlier this season at least showed determination to make life difficult.

After 15 minutes there had been a dearth of excitement but United soon created a scoring chance when Ferdinand’s stunning 50-yard diagonal pass found Young and the winger ignored the darting runs of van Persie and Rooney to fizz a shot across goal. 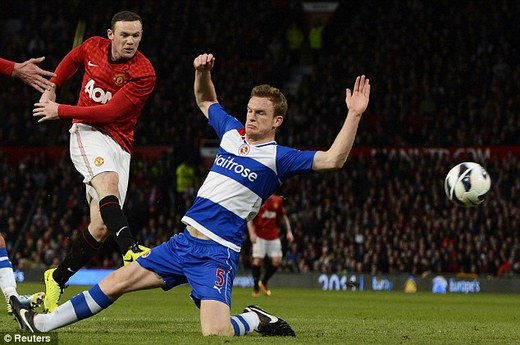 They all count: Rooney's shot took a deflection off Reading defender Alex Pearce before nestling in the net

After that, United improved somewhat. On 18 minutes Welbeck sliced a volleyed effort over the bar and two minutes later Reading goalkeeper Stuart Taylor had to race out of his area to prevent Young reaching Giggs’ excellent through-ball. A goal seemed inevitable and after 21 minutes United got it as Ferdinand’s bounding run out of defence created space for Rooney, who lashed a shot into the ground and courtesy of a slight deflection off Alex Pearce it beat Taylor. “We shall not be moved,” chorused the Old Trafford crowd.

Later in the half, Rooney and van Persie had long-range efforts that Taylor nervously saved, while Reading’s sole testing shot came when Hal Robson-Kanu curled a 20-yard strike round David De Gea’s right post. Ferdinand seemed to epitomise United’s first-half performance; cruising around the pitch at a canter, rarely troubled whilst calmly doing everything he needed to do. 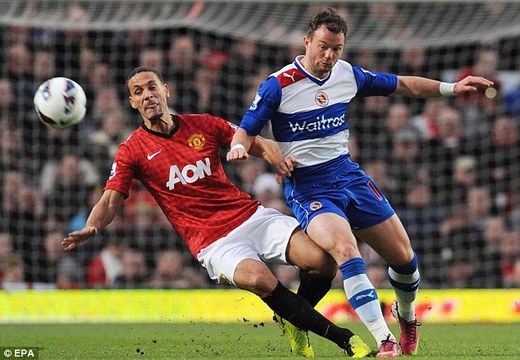 Battle: Rio Ferdinand vies for the ball with Noel Hunt as United edge to victory at Old Trafford

Reading started the second half with a greater sense of adventure and United had to be alert in defending a flurry of corners in the opening ten minutes of the half. The Reds, however, regained control and Welbeck, Young and van Persie all had efforts on goal. The latter’s was a vicious free-kick from 30 yards that Taylor punched clear.

Reading’s second-half performance proved far better than their first and with 16 minutes remaining, United had to introduce Carrick in place of Young in an attempt to control possession through the middle of the park and no doubt attempt kill the game.

Carrick made a definite impact on the game and helped conjure a chance for Giggs, whose shot from a narrow angle on the right was stopped by Taylor. Just moments later, Rooney laced a shot over the bar and van Persie acrobatically fired over in injury time. United could not add to the tally, but three more crucial points were all that was required and the Reds attained them dutifully.