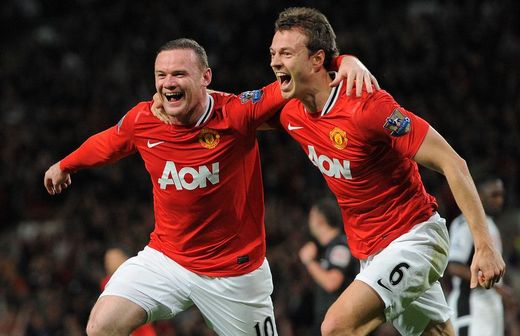 United took three points to go back to the top of the table but were made to fight all the way by obdurate Fulham, who defended manfully throughout and ensured a nervous night at Old Trafford.

Wayne Rooney's first-half strike proved just about enough but Sir Alex's side were unable to add to the goal and the atmosphere grew increasingly tense in the closing stages with Danny Murphy, so often the scourge of United in the past, perhaps unlucky not to earn a penalty after going down inside the area towards the end.

Although the Reds dominated the early exchanges, the first genuine effort did not arrive until the 11th minute when Ryan Giggs met a Rafael cross with a goalbound header but Mark Schwarzer caught it impressively. With Giggs being asked to play the Paul Scholes role in his fellow veteran's absence, his probing passes were regularly dealt with by the Cottagers' defence.

Gradually, Fulham came more into the game and Moussa Dembele's menacing dribble led to him dragging a shot wide before Clint Dempsey ran at Jonny Evans but shot too close to David De Gea. The Londoners continued to put their bodies on the line at the other end, making a series of fine blocks, and, with the team growing in confidence, Dempsey forced a spectacular diving catch out of De Gea.

Predictably, the Reds responded to the wake-up call through Antonio Valencia but his shot was blocked by John Arne Riise after a one-two with Danny Welbeck. The breakthrough was almost provided by an unlikely source when Patrice Evra's ambitious overhead kick dropped wide and fellow full-back Rafael also had a decent chance but shot tamely at Schwarzer with his left foot.

After a penalty shout for handball against Stephen Kelly was turned down by referee Michael Oliver, the deadlock was broken three minutes before the interval. Ashley Young's dangerous cross went over Brede Hangeland's head and under Riise's studs. Evans pounced to show great awareness to tee up Rooney and the striker gleefully smashed home, immediately acknowledging the Northern Irishman's part in the goal.

Relaxed, the Reds started the second half in complete control but were unable to find another way past Schwarzer. Giggs' excellent pass released Valencia but the Australian keeper saved well, with Riise getting to the rebound first to stab it behind to safety.

Aaron Hughes survived a nervous moment when dealing unconvincingly with a Rafael centre before a trademark curler from Young brought the best out of Schwarzer, who dived to parry. Damien Duff made a vital block as Fulham continued to smother many of the United attacks and Sir Alex decided to shake things up in attack by replacing Welbeck with Javier Hernandez.

The champions kept knocking on the door but Giggs dragged a left-foot attempt well wide and Schwarzer made a superb double stop to keep out Young following a cross from Valencia. When the ball came out to Giggs, Hangeland made yet another vital intervention to keep the visitors within touching distance.

With Rio Ferdinand and matchwinner Rooney substituted as the clock ticked down, the capital club were able to ensure it was nervous finale as Old Trafford grew ever more tense. And there was an almighty scare when substitute Murphy went down under Michael Carrick's challenge towards the end of normal time but Oliver waved 'play on' instead of pointing to the spot. Fittingly, Evans capped an inspirational individual performance by heading away Riise's long throw-in to provide the last act of a game that, while draining, could prove vital in the final reckoning.

David De Gea
An assured performance from the Spaniard who was reasonably untroubled for the most part. A number of strong punches clear of the box and a flying dive to deny Clint Dempsey were the stand-out moments.

Rafael
A strong run-out both going forward and in defence. Combinations of great inter-play with Valencia and a couple of vital interceptions capped a good all-round display for the Brazilian.

Jonny Evans
Another outstanding performance from the Northern Ireland international who was named Sky Sports' Man of the Match. Made some important clearances with a host of towering headers and showed great vision to pull the ball back for Rooney to net the winner.

Rio Ferdinand
A typically controlled display from Rio who, alongside Evans, dealt with the threat of Pavel Pogrebnyak with minimal fuss. Substituted in the second period as a precaution after his back complaint flared up.

Patrice Evra
Involved in a lot of United's good play and had a shout for a penalty turned down after his cross collided with the arm of Fulham’s Stephen Kelly. Sent an audacious over-head kick narrowly wide soon after from a corner.

Antonio Valencia
Praised after the game by Sir Alex, the winger maintained his fine recent form with another energetic performance. Provided some decent crosses from the right and was denied a goal by a fine Schwarzer save early in the second half.

Michael Carrick
Quietly went about his job with some tidy passing and showed good composure in a congested midfield. His collision with Danny Murphy late on in the box was the game's big talking point with even Sir Alex admitting the Reds were lucky not to concede a penalty.

Ryan Giggs
By no means a vintage performance by the evergreen Welshman, but Giggs put in a decent shift, particularly after the break.

Ashley Young
Performed well throughout. Young provided the cross from the left which led to Rooney's winner and he was unlucky not to get on the score-sheet himself when he was denied by an excellent double-save by Schwarzer in the second period.

Wayne Rooney
On hand to net the crucial winner - his sixth goal in seven games this month and 28th for the campaign. Was heavily involved early on, but struggled to impose himself after the break with Sir Alex feeling the striker "tired" late on. Was replaced by Scholes 12 minutes from time.

Danny Welbeck
A quiet night for the United youngster despite always being a willing runner into the channels to stretch the Fulham rearguard.

Javier Hernandez (for Welbeck, 63 mins)
Another spritely performance from the Mexican who was always on the move. Did his best to bring others others into play but never really got a clear sight of goal.

Chris Smalling (for Ferdinand, 74 mins)
Took over defensive duties from Rio and worked hard alongside Evans in what turned out to be a frantic finale. Made some key interceptions on the deck and won some vital headers in the air.

Paul Scholes (for Rooney, 78 mins)
A classy if somewhat brief run-out for Scholes who was brought on to add a sense of control as the nerves crept in.