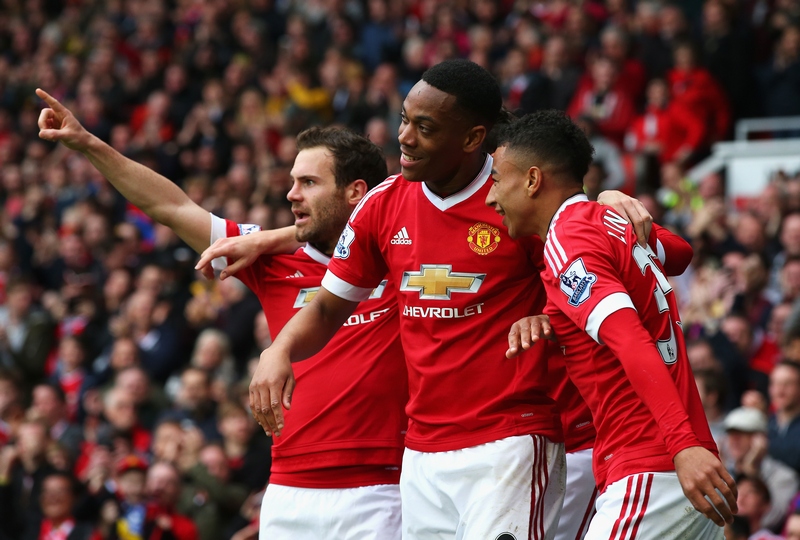 Anthony Martial scored Manchester United's 1,000th Premier League goal at Old Trafford to seal a narrow 1-0 win over Everton on the day when the Sir Bobby Charlton Stand was unveiled.
Martial grabbed the decisive strike seven minutes into the second half as he squeezed the ball home from substitute Tim Fosu-Mensah's low cross, as the Reds moved above West Ham United into fifth.
Boss Louis van Gaal opted to stick with the same XI that defeated rivals Manchester City before the international break, but did make two changes on the substitutes' bench as Ander Herrera and Ashley Young replaced Adnan Januzaj and the injured Bastian Schweinsteiger.
The atmosphere before kick-off at Old Trafford was particularly special, with fans in the Sir Alex Ferguson Stand holding aloft coloured tiles to spell 'Sir Bobby' in one giant mosaic effect, as the South Stand was renamed in the club legend's honour in the 60th year since his United debut. 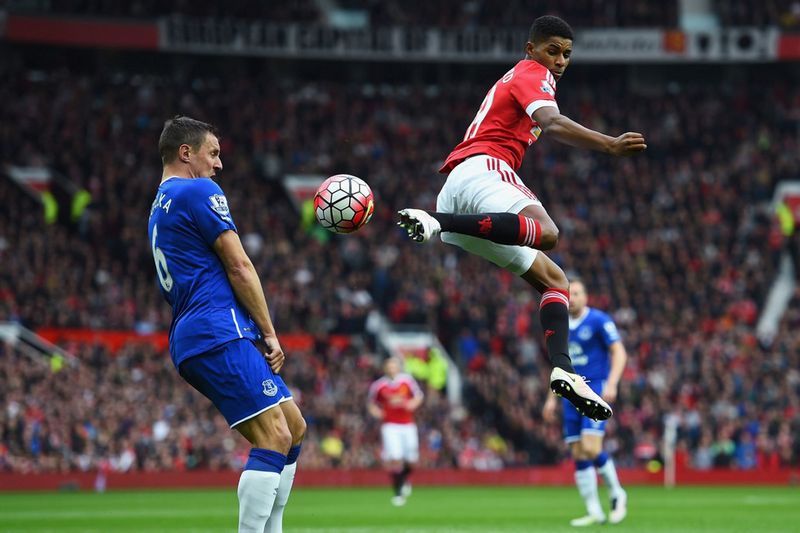 Looking to mark the special day with an equally special display, as he showed in his first Manchester derby last time out, Marcus Rashford cutely back-heeled Marcos Rojo's low cross into the path of Martial, who was inches away from connecting. Defensively, United had to cope with Gerard Deulofeu in the early stages as he was looking dangerous down the Toffees' right, with Rojo knowing he would have his work cut out trying to halt the tricky Spaniard.
The first real effort on goal fell to Martial on 17 minutes as he volleyed narrowly wide of Joel Robles' far post, having played a neat one-two with Jesse Lingard. At the other end, Romelu Lukaku, who was being kept largely quiet by the impressive Chris Smalling and Daley Blind, was nearly in on goal for the first time, but David De Gea was alert to clear before the Belgian could latch onto a loose ball. 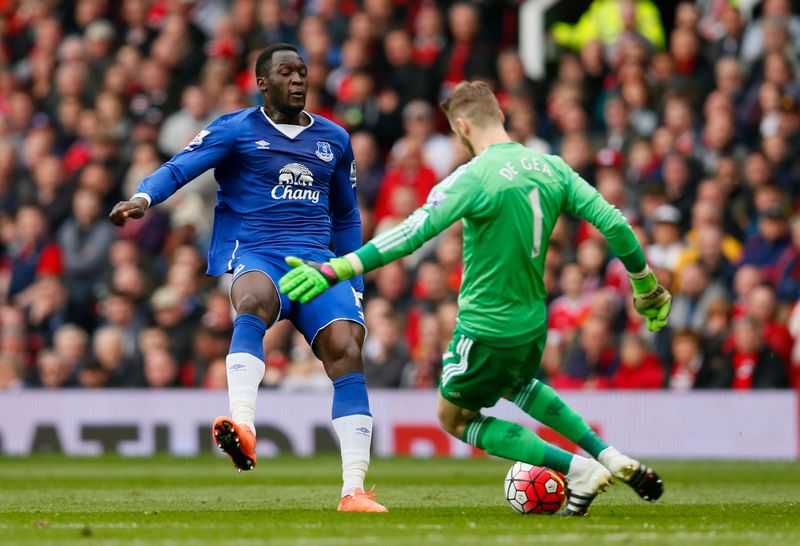 A second backheel from Rashford set up Martial again shortly before the break, but John Stones came diving across to halt what would have been a goal fitting to mark any occasion.

Possession: United 54% Everton 46%
Shots at goal: United 7 Everton 1
Shots on target: United 0 Everton 0
Corners: United 4 Everton 1
Everton, who had been impressive on their travels this season, having lost just once away from home before this game, started the second half the better of the two sides, with Deulofeu looking to trouble Matteo Darmian, who had switched to left-back with young Fosu-Mensah replacing Rojo at the break.
In-form striker Lukaku, who had scored six goals in his last seven appearances for Everton in all competitions, was inches away from adding to that tally as he turned Blind in the box, but the Dutchman did well to deflect the powerful front-man's effort wide. 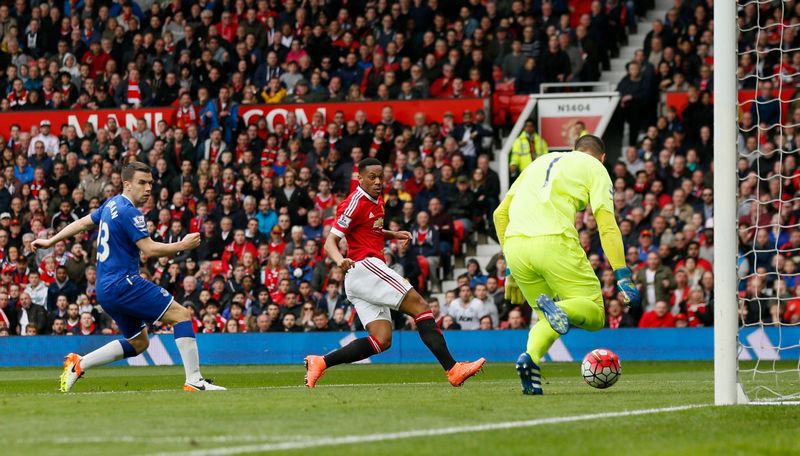 James McCarthy then had a penalty appeal for handball turned down as his wicked effort was blocked by Smalling before, against the run of play, Fosu-Mensah latched onto another sublime flick from Rashford and directed a low cross to the back post, which found Martial loitering and he bundled the ball home for United's 1,000 Premier League home goal.
The Toffees were inches away from an instant response but, fortunately for United, Phil Jagielka's header rattled the crossbar following a corner.
The goal had brought the game to life and Juan Mata played a wicked low cross into the box, which first Rashford failed to connect with, before Smalling's effort was blocked to deny United a second. At the other end, De Gea, who was the hero in this fixture last season, did brilliantly to deny Jagielka, palming away from close range following a scramble from an Everton corner. 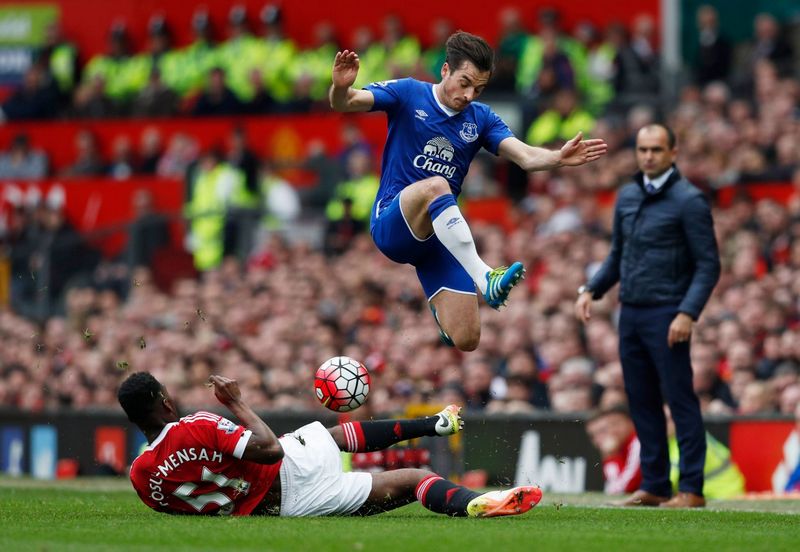 Everton pushed late on for the equaliser and forced Fosu-Mensah to divert a dangerous Seamus Coleman cross away, but United took all three points away in the pursuit of a top-four spot.

Juan Mata: "They had chances and they are a good team and they play good football, but in the end one goal was enough and we are very happy today."

Louis van Gaal: "It’s very important; if you lose today, the win against Manchester City is worthless. Now, we are still in the race and we have still four home matches and three away matches."

Anthony Martial scored #MUFC's 1,000th Premier League goal at Old Trafford to seal a narrow 1-0 win over Everton on the day when the Sir Bobby Charlton Stand was unveiled.