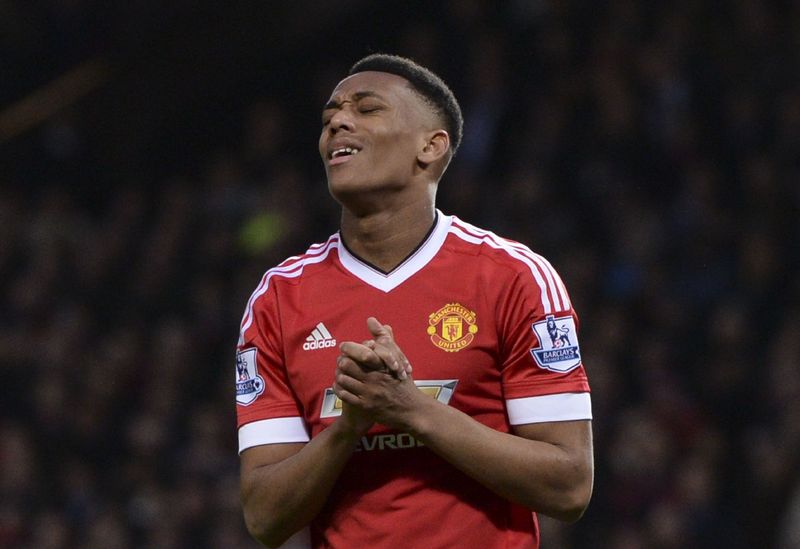 A late Charlie Austin header sent Manchester United tumbling to a first defeat in five games as Southampton snatched all three points at Old Trafford.
Debutant Austin, a second-half substitute for Sadio Mane, nodded home from another Saints' substitute, James Ward-Prowse's, 87th minute free-kick to snatch the three points for Ronald Koeman's men.
United boss Louis van Gaal made one change to the side that beat Liverpool at Anfield with Cameron Borthwick-Jackson replacing the injured Ashley Young who requires surgery on his injured groin. Adnan Januzaj made the substitutes' bench after scoring twice for the Under-21s against the Saints' second string in midweek. David de Gea made his 150th Premier League appearance for the Reds. 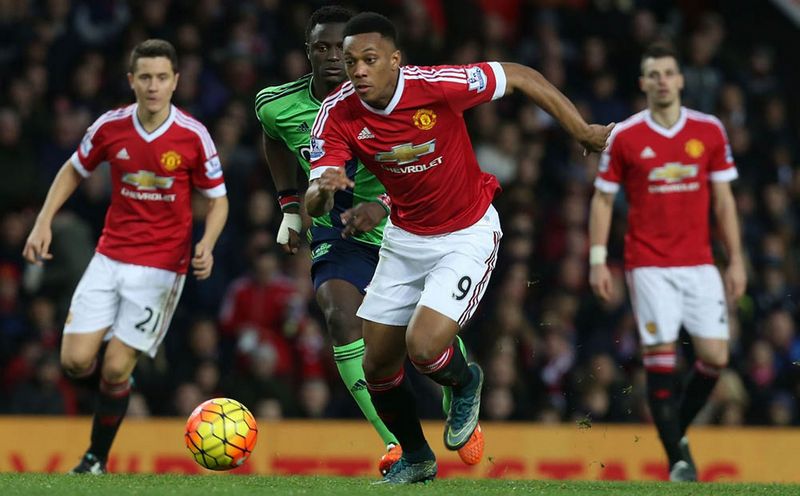 Both sides arrived into the game in winning form - United having defeated Liverpool 1-0 at Anfield and the visitors having beaten Watford and West Brom respectively in their last two outings, but it was a tentative start. The only efforts on goal within the first 15 minutes saw Anthony Martial try his luck from 25 yards, but his effort lacked the power to trouble Fraser Forster, before Daley Blind unleashed a speculative drive from 35 yards in which Forster caught easily. 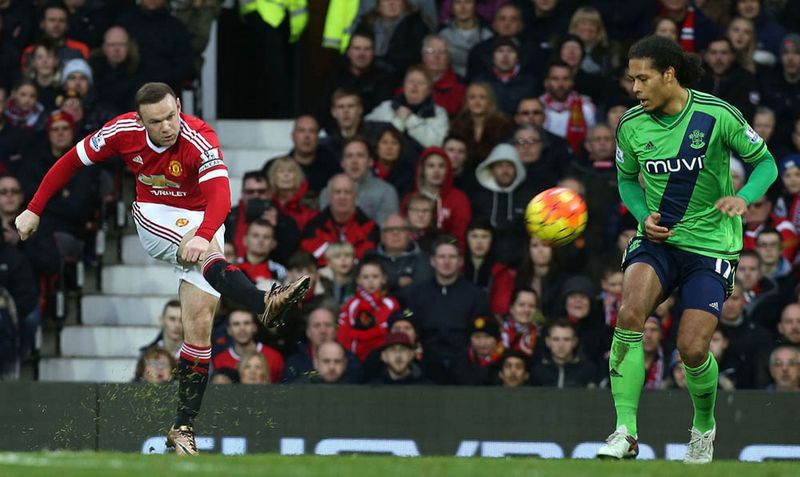 Wayne Rooney, who was looking to score for the fifth successive game, had his first sight of goal on 20 minutes as he picked the ball up from Ander Herrera 20 yards out, but his effort fizzed well past the far post. Former Saints man Morgan Schneiderlin fouled Dusan Tadic and Jordy Clasie's inswinging free-kick was headed over by Victor Wanyama at the far post.
The best chance of the first half fell to Mane 10 minutes before the break as Tadic clipped a delicate ball over the top for the Senegalese man, but he failed to control the ball out of the air effectively enough to fire an effort on goal with just David de Gea to beat.
At the other end, Jesse Lingard looked to insert an injection of pace into the game, cutting inside from the right and firing a shot at goal. His effort should have resulted in a United corner, but the referee pointed for a goal-kick and the game was goalless at the break.

Possession: United 57% Southampton 43%
Shots at goal: United 5 Southampton 2
Shots on target: United 1 Southampton 0
Corners: United 0 Southampton 1
Van Gaal looked to the bright-green booted Juan Mata at the break as the Spanish playmaker replaced Marouane Fellaini and looked to pull the strings in behind Rooney with Herrera dropping into a deeper midfield role alongside Schneiderlin.
The change lifted the Old Trafford faithful and United started the second period with a sense of attacking urgency. Firstly, Borthwick-Jackson's dangerous cross evaded everyone before Martial was unlucky not to latch onto substitute's Mata's eye-of-the-needle pass. 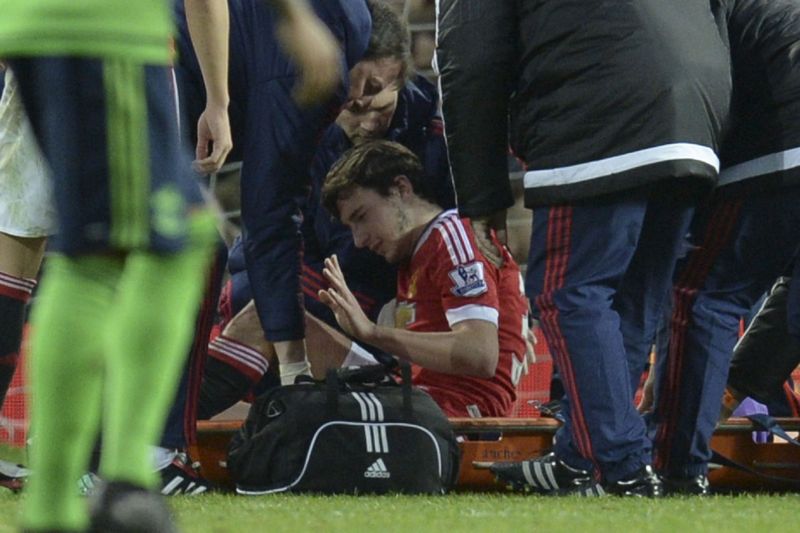 Southampton were dangerous on the counter-attack mind as Mane broke with pace down the right but his deep cross was crucially cleared by Matteo Darmian. That was to be the Italian's last piece of action though as he was replaced by Paddy McNair on the hour mark after clashing with Shane Long whilst diverting the cross away.
The visitors then threatened from successive corners as, first, Long's header was deflected wide before Wanyama headed narrowly wide of De Gea's far post. Both teams probed for an opening, looking for that killer pass to unlock the opposition's defence. Saints' debutant Austin was sent on in place of Mane to try to break United's rearguard. 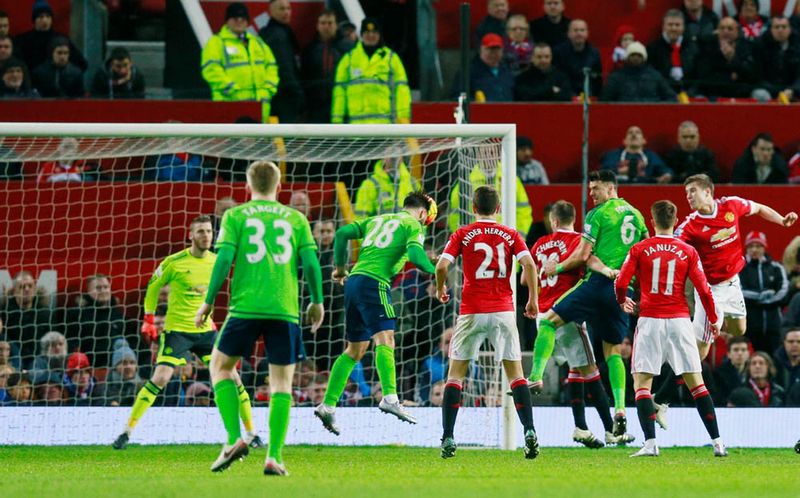 And, after Long threatened as he headed over Ward-Prowse's free-kick, Austin would not miss his opportunity as he headed in another set-piece taken by the youngster, needlessly conceded by the late introduction of Januzaj for a foul on Austin, with what looked like his first touch of the game.
Januzaj fired wide with the only chance to grab an injury-time equaliser, meaning Southampton collect three points at Old Trafford for the second successive season.

Van Gaal: "I think it was a poor performance - two teams who did not create any chances and the lucky one won."

Smalling: "We can’t dwell on today too much. We’ve got to go again on Friday and the midweek afterwards as well. We need to pick ourselves up as we’re the only ones who can turn this thing around."