May 5, 2013
Posted by Steven Tan | Source from Adam Marshall, ManUtd.com 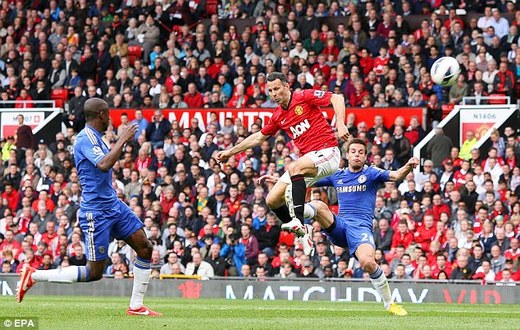 Manchester United were beaten by a Chelsea side chasing a top-four spot as the champions conceded a late winner to Juan Mata.

It was the first time the Reds failed to score in a home league game since December 2009, against Aston Villa, and the hosts ended a clash that often lacked any real intensity with 10 men after Howard Webb decided to flash a red card at Rafael in the closing stages.

Sir Alex Ferguson handed a chance in midfield to Tom Cleverley and Anderson and the Brazilian made an early impact inside the opening couple of minutes by imposing himself on the proceedings. However, the Blues created the first chances with Demba Ba backpedalling to head a Mata cross off target under no pressure and Rafael making an important block when Ba looked to profit from another Mata centre, which Anders Lindegaard could only paw at.

Rafael was soon up at the other end, beating Ashley Cole and seeing his cross squirt out of Petr Cech's grasp before being cleared to safety. Cleverley then swept well wide after an intelligent chested lay-off by Robin van Persie but Chelsea had the best effort of the half in the 14th minute. A mistake by Patrice Evra high up the pitch granted Oscar the freedom of the flank to latch onto Frank Lampard pass and accelerate forward. As he continued unchecked, it needed Lindegaard to push the Brazilian's shot onto an upright.

There were plenty of shots on goal but most of them lacked any real threat. Ryan Giggs rolled an effort at Cech following snappy passes by Rafael and Anderson while Victor Moses blasted over when a Phil Jones slip presented the ball to Ramires and he, in turn, fed Mata. Lampard and Ba also had attempts and United almost carved out a rare clear sight of goal when Cleverley's pass released van Persie but his drive was blocked by Cesar Azpilicueta.

Cleverley chanced his arm himself but sent a wasteful shot rising into the East Stand after Cech punched out a Giggs cross following some impressive industry by Anderson, who was performing well in patches. Giggs was again involved when placing a through ball beyond Branislav Ivanovic for van Persie but the lone striker's first-time shot bounced a foot wide.

After Oscar's ambitious drive fizzed past Lindegaard but also beyond the far post, United finished the first half strongly. Giggs stabbed an awkward left-footed volley off target from an Antonio Valencia centre and van Persie had a header saved after Nemanja Vidic popped up in the left-wing position, galloping onto a fancy flick by Evra.

Chelsea felt there was controversy at the start of the second period when referee Webb felt Giggs had not fouled David Luiz with replays proving any offence took place outside of the area, in any case. The Reds were reduced to largely playing on the break but should have done much better from one such raid when Jones misplaced a cross after Anderson put  him clear on the right.

Mata escaped Giggs to nudge the ball into Lampard's path but the veteran skied over the bar and Vidic had to stylishly cover for Jones after the midfielder was caught napping by Ba as the greater threat was posed by Rafa Benitez's men.

In the 67th minute, Mata threw himself to the ground to win a cheap free-kick out of Evra which ultimately led to Vidic making a vital headed clearance and Sir Alex decided it was time to introduce Wayne Rooney into the fray, with Alexander Büttner also appearing in a double change for Anderson and Cleverley.

Büttner moved into an attacking left-sided position with Rooney offering more support to the isolated van Persie. Rooney was soon into the thick of things and misdirected a header, off balance, following a cross by Valencia as the Reds tried to build some momentum.

However, Chelsea kept pressing and Mata was close to meeting Lampard's ball into the box and three corners in succession were defended capably. As the game entered the final 10 minutes, Rafael's run led to Ivanovic going close to putting through his own net but any thoughts that the Londoners would tire after their recent fixture congestion were looking unfounded.

Evra's shove on Mata produced another free-kick in a similar position to earlier in the half and Luiz clubbed the dead-ball into the crowd but the winner was just around the corner.  Referee Webb failed to whistle when Rooney was toppled over by Ramires and the Brazilian was heavily involved in the move that led to Mata finding himself in space inside the area. The Spaniard's shot took a touch off Jones and crept in at the far post.

Rafael was dismissed with two minutes left after kicking Luiz, becoming the first Red to be sent off in the Barclays Premier League this season. It looked a harsh decision by Webb but it left the Reds a man light and forced into accepting a rare home reverse.