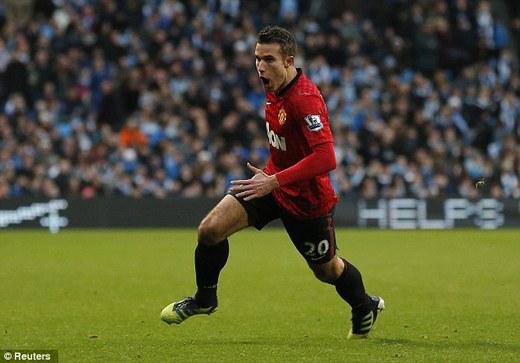 United won another classic Manchester derby with Robin van Persie's deflected late free-kick handing the Reds a sensational 3-2 triumph after City had fought back from two goals down.

Wayne Rooney's two similar first-half strikes had the Reds on course to end the champions' unbeaten home run in the Barclays Premier League that has lasted almost two years. The match looked to have turned completely with half an hour left as Ashley Young had a goal wrongly ruled out before Yaya Toure netted within seconds.

It allowed the Blues to stage a comeback that led to Pabo Zabaleta levelling from a corner on 86 minutes but the visitors were simply not prepared to settle for remaining three points clear at the top of the table. Incredibly, Van Persie had the final say in stoppage time to end City's proud run and inflict their first league defeat since last April.

There were surprises in both line-ups with Mario Balotelli starting for the hosts while Antonio Valencia and Tom Cleverley were fit enough to represent the Reds. Balotelli had two early chances as City began the better as his ambitious free-kick was helped wide by David De Gea before the Italian could only muster a wild slash at a Gael Clichy centre following a tremendous pass by David Silva. 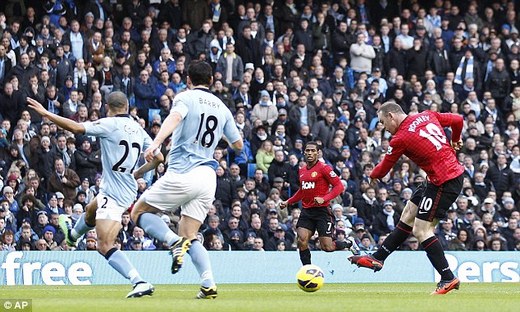 Sir Alex's side had not threatened before a glorious move on 16 minutes carved open the Blues' defence. Young headed Patrice Evra's ball  down the line on to van Persie, whose chest-pass returned it to the winger and had City on the back foot. Young timed it right to feed Rooney and the striker set himself up with a fine touch before scuffing into the far corner past a motionless Joe Hart. It was not the cleanest of strikes but certainly a sweet one.

The way in which United hurt the champions with the first attack of menace was encouraging and captain Vincent Kompany had to come off due to injury with Kolo Toure taking his place. Undoubtedly, it was another boost and Hart had to race from goal to prevent Young from reaching a van Persie through ball.

Sergio Aguero somehow worked his way through four defenders but could only manage a tame side-foot shot that De Gea comfortably fielded and, six minutes later, another rapier thrust by the Reds again had the desired effect. Valencia picked out Rafael on a typically energetic burst forward and Rooney advanced smartly onto the Brazilian's pull-back to clip another clinical finish wide of Hart. 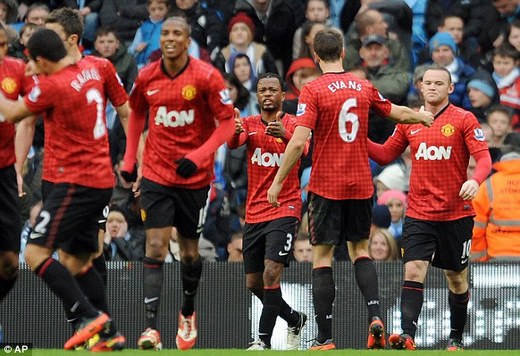 A furious response was expected but, aside from a scare when Gareth Barry choked his shot from the centre of goal two minutes before the break, the Reds looked assured as the half ended and good value for the two-goal lead.

Some defensive reorganisation for United was required when Chris Smalling replaced the injured Jonny Evans while Roberto Mancini withdrew the ineffective Balotelli in order to hand Carlos Tevez another chance to upset his former club. Although Cleverley smashed a half-chance over the bar, City started to build up a head of steam with Aguero sending a decent dipping attempt off target and Rio Ferdinand needing to defend a dangerous Samir Nasri cross brilliantly at the far post.

The whole complexion of the game changed around the hour mark as United had a goal erroneously ruled out for offside. Van Persie bent a beautiful right-foot shot against the inside of a post with Hart well beaten and Young's rebound was disallowed, even though replays showed Zabaleta was playing him onside.

Within a matter of seconds, instead of being 3-0 down, City reduced the deficit despite the best efforts of De Gea. The Spanish keeper made a superb double-stop to thwart Tevez and Nasri but Tevez showed great composure to tee up Yaya Toure for a precise finish not disimilar to Rooney's two efforts.

United gamely tried to use attack as the best means of defence and Evra was angry to be denied a penalty by referee Martin Atkinson after being caught by Kolo Toure inside the box. The Frenchman showed his nous in a defensive role to help eradicate the danger provided by pal Tevez as the match swung from end to end but continued to get forward and misjudged a Rooney corner from a promising position.

With 12 minutes left, United advanced with menace again but Cleverley's cross was misjudged by van Persie, who could only head wastefully wide. City responded in kind as Silva showed great skill inside the box to allow himself plenty of space to fire goalwards but the ball cannoned off De Gea's shoulder and against the woodwork.

It was a let-off for the visitors and, after Tevez blazed over from another move instigated down City's right, Mancini threw on Edin Dzeko at the expense of goalscorer Yaya Toure. Sir Alex had to replace Valencia with Phil Jones and seemingly set the stall out for the closing stages but Zabaleta came up trumps with four minutes left.

A corner came out via van Persie to the full-back on the edge of the box and, totally unmarked, he drilled a right-foot drive into the net through Jones' legs and into the net for the equaliser. De Gea had to be alert to save from Silva after Evra's misjudgement inside the box and then keep out a Tevez attempt as City searched in vain for a winner. 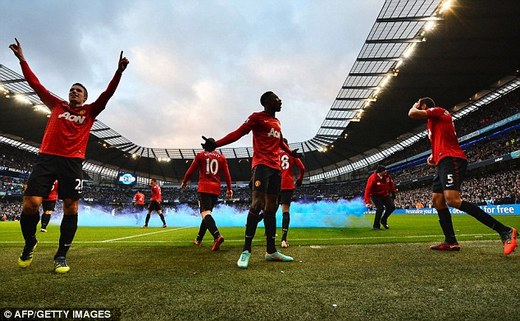 Instead, van Persie came up trumps and showed why he is one of the best players in the division. A free-kick by the Dutchman deflected off Nasri and past Hart's despairing dive to spark chaotic scenes behind the goal with Ferdinand bloodied during an incident that is bound to spark plenty of response in the media.

That does not matter in terms of the overall picture as United did what they do best - win in the most dramatic of circumstances and stretch that advantage at the summit to six points. This performance alone illustrates how determined United are to wrest the title back across Manchester come May.