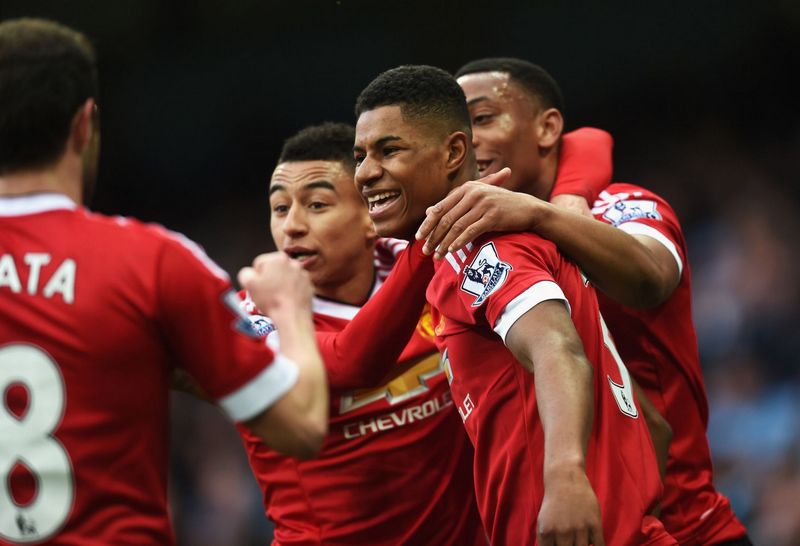 Manchester United closed the gap on rivals Manchester City to just one point after a crucial 1-0 victory at the Etihad Stadium, courtesy of Marcus Rashford's excellent first-half strike.
The Manchester-born striker - making his first appearance in this fixture - produced a moment to savour on 16 minutes, showing an incredible turn of pace to burst into the area and slot the ball past Joe Hart. It was a mature piece of centre-forward play, and one which was ultimately enough to ensure the Reds left the Etihad with all three points.
Ahead of the game, Louis van Gaal opted to make two changes to the side that faced Liverpool in midweek, with Matteo Darmian and Morgan Schneiderlin replacing Guillermo Varela and Marouane Fellaini respectively in the starting line-up.
While October's reverse fixture produced a closely-contested goalless draw, both sides showed more intent from the off this time around, as City won a corner in the opening minute. The game's first chance fell for the hosts shortly after, as Darmian's defensive header fell kindly for Jesus Navas, but the winger's first-time volley dropped narrowly wide.
Navas was regularly involved in the early stages and went closer with his next effort, only to be denied by fellow countryman David De Gea. Slick passing between Raheem Sterling and David Silva allowed the former to dig out a deep cross, but the United keeper got down quickly to save with his feet. 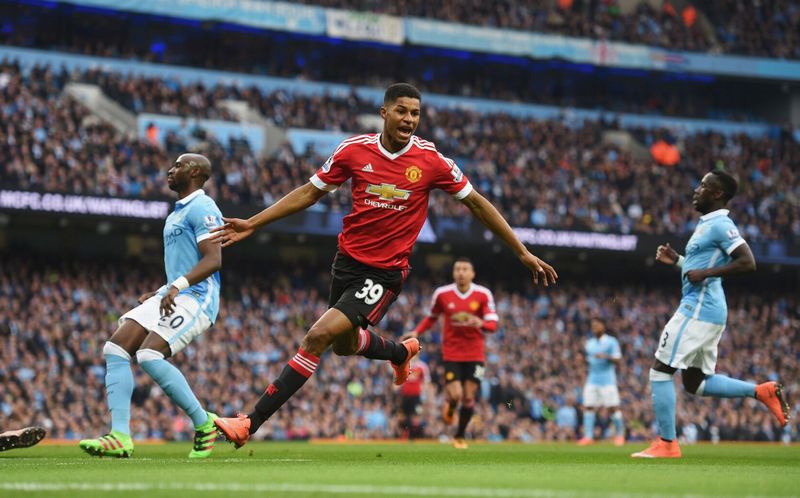 With little over a quarter of an hour played, though, the Blues were made to pay for their missed opportunities. Juan Mata found space in midfield and picked out Rashford, who left Martin Demichelis for dead on the edge of the box, sprinting past the defender to calmly curl the ball home.
The Reds' youthful frontline was beginning to impress, with Jesse Lingard proving a handful for the much-changed Blues defence in the no.10 role. And van Gaal's men might have added a second on 18 minutes, as Anthony Martial tested Hart with a powerful drive.
The home side were quick to remind United of their attacking intent at the other end, and should have equalised when Silva's free-kick was headed wide by Demichelis, but the Blues' goal threat suffered a blow soon after when Sterling was forced off through injury. 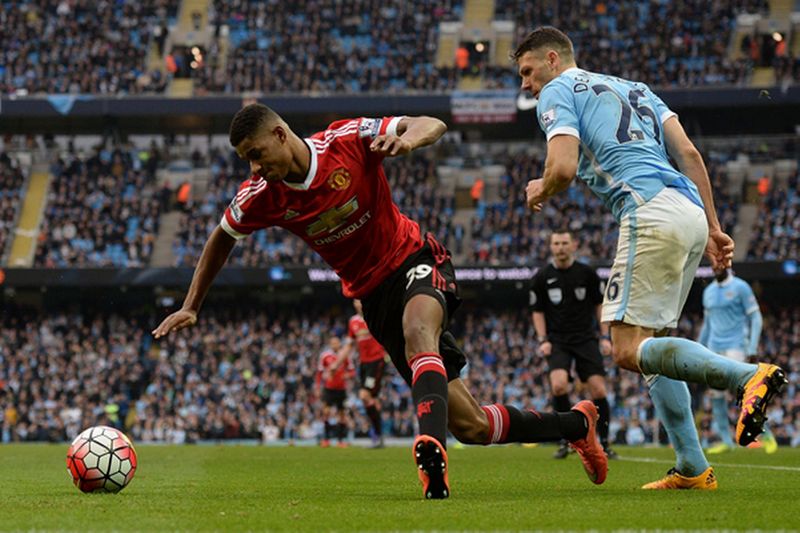 United might have been awarded a penalty just before half-time, when Rashford appeared to be brought down by Demichelis, but referee Michael Oliver waved away any claims, and the Reds took an important advantage into the break.

Possession: City 49% United 51%
Shots at goal: City 9 United 2
Shots on target: City 2 United 2
Corners: City 5 United 2
A first half full of incident was almost immediately followed by a second United goal after the interval, as Martial attempted to latch onto a short back-pass from Demichelis, but Hart cleared the danger just in time and suffered an injury in the process. 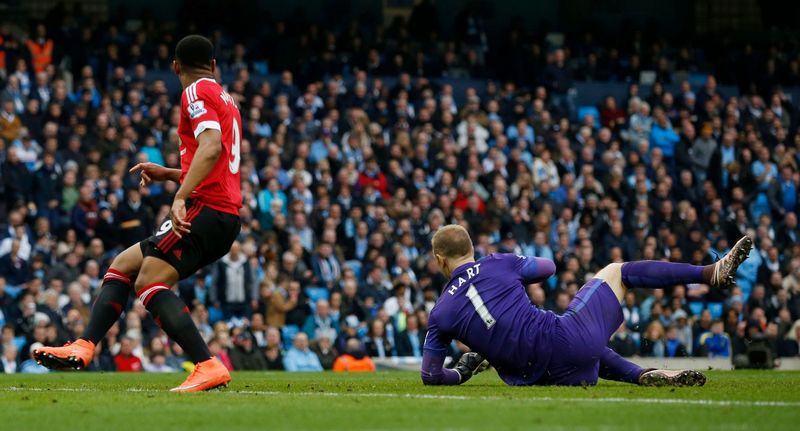 The goalkeeper's replacement, Willy Caballero, might have been picking the ball out of his net moments after coming off the bench, but produced a fine save to deny Martial after the striker's effort deflected towards goal.
The chance seemed to spark City into life at the other end and, just after the hour-mark, the hosts went close to an equaliser twice in quick succession. First, Bacary Sagna's low cross was almost met by substitute Wilfried Bony, but for an excellent challenge from Chris Smalling, before another right-wing delivery from Toure was headed onto the woodwork by Sergio Aguero.
City were now well on top, but were struggling to carve out any noteworthy opportunities. United, meanwhile, soaked up the pressure expertly, and defended a number of crosses and goal-mouth scrambles to maintain the narrow lead. 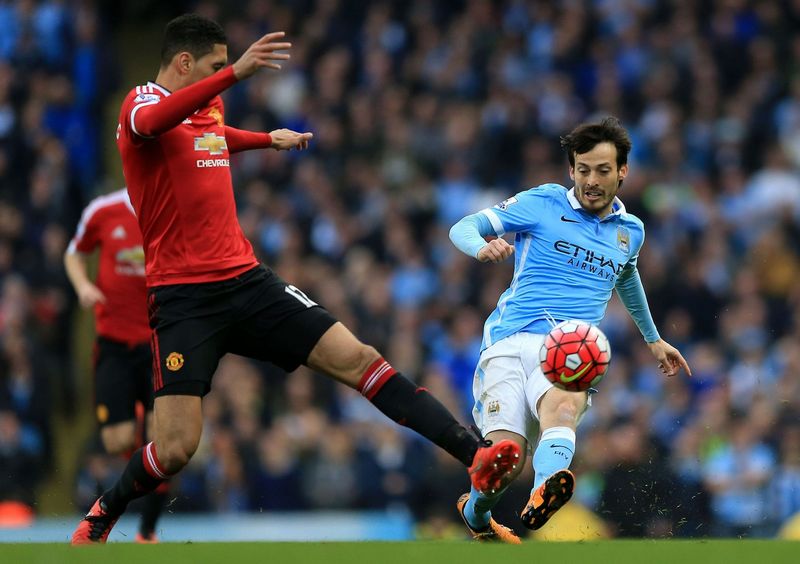 As six minutes of added time were displayed, United's battling display was almost cruelly undone by Aguero, who took down Silva's diagonal ball but pulled his shot wide, in a chance which rather summed up City's afternoon.
Instead, the points and derby-day bragging rights belonged to van Gaal's men, on a memorable day for Rashford and United.

"I think it is more than three points. The position we are in the league meant it was a must win today. We had to get the three points before the international break to give us a boost and something to go at when we come back." - Michael Carrick

"When I see the dressing room, I think it shall give a boost and real belief - it was fantastic to see. We fight every match of course but now we have a big result and it was a long time ago that United has won here so it's also for the fantastic for the fans that we have won." - Louis van Gaal

#MUFC closed the gap on rivals Manchester City to just one point after a crucial 1-0 victory at the Etihad Stadium, courtesy of Marcus Rashford's excellent first-half strike.