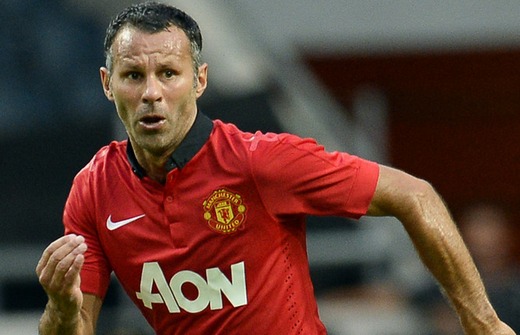 The veteran Red Devils midfielder made his League debut way back in March 1991 and made his 953rd appearance for the club in Wednesday's 5-0 win over Bayer Leverkusen in the UEFA Champions League.

Arsenal boss Arsene Wenger said of his long-time opponent: "If I'm 20 per cent above the normal level at a young age and I drop 10 per cent, I'm still 10 per cent above everybody else. That's what happened to Ryan Giggs.

"What he has done is absolutely exceptional. I always thought that Ryan Giggs did not always get the reward or the recognition for his quality and his huge career because he did not play in the World Cup and the European Championship.

"You look at his club career - it's absolutely unbelievable. The quality of his performances show a masterclass at 40. What is very remarkable in his case is that he has turned from being an individual player into being a good passer and a collective player.

"That is a very difficult transformation and that shows you that he not only had individual quality but the intelligence and understanding of the game as well.

"People like Thierry Henry [also] had exceptional qualities," added Wenger. "They would run 100 metres in 11 seconds when everybody else did it in 12.5 or 13. So if today they are running it in 12, they are still quicker.

"They start from a huge potential and that's why at that age they can still survive, because they have the football intelligence. They had exceptional physical qualities at the start."

Stoke boss Mark Hughes played with Giggs for both United and Wales in the 1990s, and was also quick to talk up his achievements.

He said: "He is the legend of the Premier League. I remember him breaking through into the first-team squad and Ryan was the shining light in that group of players. No one will repeat what he has achieved.

"It was always evident that he was an exceptional talent. Nobody in training could get anywhere near him and we nicknamed him 'Sidewinder'. I'm amazed that he's adapted to the modern game so well in his later years."

Another former team-mate, Hull manager Steve Bruce, added: "There'll never be anybody else who can play at that level from the age of 17 to the age of 40. It's quite unbelievable. Even when you see him last week, he's still as fit as a flea and still has the hunger and desire to be a player.

"He still enjoys football so much. It's quite remarkable what he's achieved and he's the only one I've ever known who was a certainty. We've all seen youngsters and said 'he's a hell of a player' but he was a certainty when he was 14 or 15.

"We used to say when he ran around us when he was younger that it was so effortless, and even now he never seems to be exerting. He's blessed with a natural ability to move and run and is a wonderful athlete."