Manchester United registered a first victory at Anfield since 2007 despite a disjointed display, as a sensational goal from Rafael and Robin van Persie’s late penalty sealed a comeback win over 10-man Liverpool.

Steven Gerrard had fired the hosts into a deserved lead in the opening minute of the second half, only for Rafael to quickly curl home an unstoppable finish to level matters, and van Persie crashed home the decisive penalty after Antonio Valencia had been fouled by Glen Johnson.

The victory came despite a largely off-colour performance from the visitors, who toiled for long periods even in spite of the 39th-minute dismissal of Jonjo Shelvey for a two-footed lunge on Jonny Evans.

Shelvey took issue with referee Mark Halsey and, curiously, Sir Alex Ferguson after being sent off, and the home support were similarly incensed by the decision to penalise Johnson for his challenge on Valencia – though the England defender clipped the Ecuadorian's heel in trying to recover the ball.

The game’s events heightened the tension on a day already shrouded in pre-match fervour. Nevertheless, all fears of unruly fan behaviour from either end of the East Lancs Road proved unfounded. On the field too, there were handshakes throughout both sets of players and Sir Bobby Charlton presented Liverpool ambassador Ian Rush with flowers to commemorate the much-publicised recent Hillsborough ruling.

Amid all the issues surrounding the game, the major piece of team news was provided by Sir Alex Ferguson’s omission of Nemanja Vidic as a precautionary measure, after the Serbian had already - for the first time since last November - completed two full games in a week. Rio Ferdinand returned to partner Jonny Evans in his stead, while Ryan Giggs stood in as captain.

After a strong start from the visitors, it was Giggs who had the game's first opening. Nani made progress down the left flank and fed the ball inside for Shinji Kagawa, who in turn teed up his captain for a poked, 20-yard effort which narrowly skirted by Pepe Reina's top corner.

Liverpool's riposte was to quickly seize control of the game. Rafael twice had to make alert defensive headers, once re-adjusting superbly after Anders Lindegaard had palmed out Luis Suarez's drilled cross, then nodding over his own crossbar as Fabio Borini  lurked with intent at the back post.

Sections of the home support were celebrating moments later, but in error as Steven Gerrard drilled a low shot just past Lindegaard’s post after a well-worked short corner.

United were rattled, and just before the quarter-hour the visitors’ defensive ranks were breached again, but a heavy first touch from Borini took him away from goal and allowed Evans to take the sting out of the Italian’s subsequent shot.

The Reds’ game was disjointed – too often frivolous with possession or pedestrian to counter – and an injury to Ferdinand looked set to further hamper Sir Alex’s gameplan. Instead, the veteran played on despite his discomfort and emerged as one of the Reds’ most important players in the first period, constantly repelling the hosts’ forward forays.

The game remained poised in that manner, with Liverpool’s possession only undone by their own attacking bluntness and solidity in the United defence. Then, with six minutes of the half remaining, the complexion of the game was completely altered.

Giggs was caught in possession by Shelvey, who sprinted into a 50-50 challenge with Evans. Both players left the ground, Evans reached the ball first and Shelvey crunched into him. Referee Mark Halsey took his time, assessed the situation and dismissed the Liverpool midfielder.

Nevertheless, it was Liverpool who continued to boss matters, as Suarez’s 30-yard free-kick forced Lindegaard into a full-length save. The interval provided a chance for United to get their collective house in order, but despite the introduction of Paul Scholes for Nani, any half-time instructions apparently fell on deaf ears.

Another half-time substitute, Suso, crossed from the left and United failed to clear the danger sufficiently, allowing Johnson’s shot to deflect to Gerrard, who had time and space to chest the ball under control and direct a left-footed volley past the sprawling Lindegaard.

As has often been the case already this season, a deficit provided the spark for United to burst into life. There was suddenly more intent and incision about the visitors, and under five minutes had passed before the scoreline was levelled in sensational fashion. 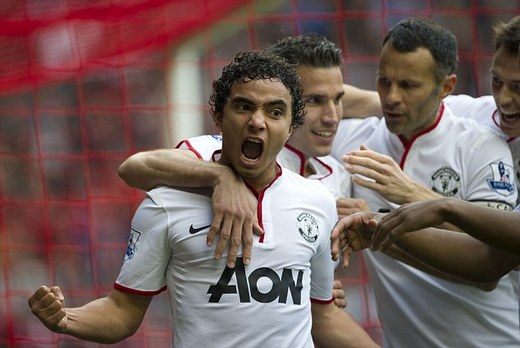 Valencia crossed from the right and Kagawa chested the ball neatly down to Rafael. The Brazilian cut inside on his left foot and, despite having little room for manoeuvre, curled an unstoppable shot high into Reina’s goal, via the Spaniard’s upright.

Anfield’s away section bellowed its delight, but the expected surge of attacking play from United was instead replaced by a game which remained hard-fought and finely poised. Suarez – fresh from having a viable penalty appeal turned down – drew a fine stop from Lindegaard with an arrowed left-footed effort. The Dane then tipped over Suso’s side-footed effort as Liverpool continued to threaten.

Though the game meandered as a stalemate, United benefited from a penalty award with fifteen minutes remaining - only the Reds' second at Anfield in Sir Alex's Old Trafford reign. Valencia showed tremendous speed to nip between Johnson and Daniel Agger and reach a loose ball, and as the Ecuadorian bore down on Pepe Reina and weighed up his options, Johnson’s attempts to recover only culminated in Valencia being bundled to the ground.

Van Persie was among three players to have missed spot-kicks for the Reds already this term, and the pressure was further heaped on the Dutchman as he faced a four-minute wait to take his kick as Agger received treatment and was subsequently stretchered from the field.

When play restarted, however, van Persie beat Reina’s valiant effort and smashed his kick high into the Spaniard’s goal. Chicharito was introduced in place of Kagawa to retain United’s counter-attacking menace, but once again the hosts might have scored as Martin Kelly got between Evra and Evans to head Johnson’s cross narrowly wide of Lindegaard’s goal.

That was as close as Liverpool came to levelling matters, despite eight minutes of added time, and instead United could bask in the unfamiliar glory of winning at Anfield for the first time in half a decade.