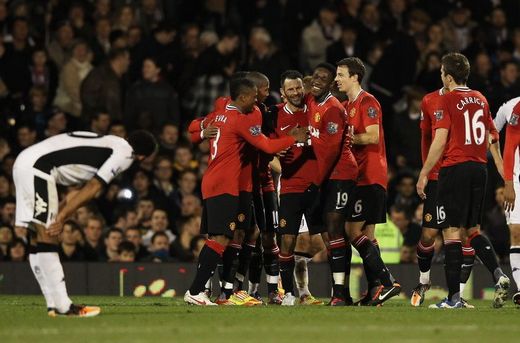 United kept up the pressure on Manchester City with another impressive performance on their travels to secure a first league victory over Fulham at Craven Cottage for almost four years.

Danny Welbeck set the Reds on their way to a convincing 5-0 win with a smart finish after just five minutes. Nani doubled the advantage in the 23rd minute, before the outstanding Ryan Giggs claimed a deflected effort, ensuring he has scored in the top flight for 22 consecutive seasons. Wayne Rooney netted a 30-yard screamer two minutes from time, before Dimitar Berbatov put the icing on the cake with a delightful back-heeled finish from close-range.

It wasn’t all good for the Reds, however, with both Phil Jones and Ashley Young picking up injuries. Jones’ in particular looked a nasty one after he was grounded by an accidental elbow to the face by Clint Dempsey in the opening seconds. He lasted until the 20th minute before being replaced by Young, who limped off midway through the second period.

Sir Alex made two changes to the starting XI that beat QPR three days earlier – Anders Lindegaard came in between the sticks, while Giggs was brought into midfield to replace Jones, who switched to right-back, with Chris Smalling moving into a central position alongside Jonny Evans to cover Rio Ferdinand’s absence through injury.

Jones seemed set to join Ferdinand in the treatment room after just a minute of play when he was caught by Dempsey. The 19-year-old was closely examined by United’s medical team before being given the thumbs up to continue.

The prolonged stoppage wasn’t about to derail the Reds who had started brightly and, just as they did at Loftus Road, United made the most of their first sight of goal and duly took another early lead.

After Nani had collected possession just inside the Fulham half, he worked his way down the left wing before pulling a low cross back to the unmarked Danny Welbeck to sweep into the far corner in the fifth minute. In truth, it was poor marking from the Cottagers, but a very tidy finish from the England international.

Giggs could have made it two three minutes later, but Jones’ lovely curling cross was just too far ahead of the midfield veteran who had burst into the area.

The Reds looked very much in the mood, while Martin Jol’s side looked distinctively out of sorts and unable to cope with United’s attacking exploits. Rooney, Giggs and Nani all tested David Stockdale soon after, but the Fulham keeper was up to the task to ensure the Cottagers remained in the game, for the time being anyway.

At the other end Bryan Ruiz got in ahead of Jones after a neat one-two in the area, but the defender recovered brilliantly with a last-ditch tackle to clear the danger. It was even more impressive given Jones was clearly still struggling with the earlier head injury; indeed his fine tackle turned out to be his last piece of action after he signalled to the bench he couldn’t carry on.

Ashley Young replaced him and immediately took up a position on the left with Nani switching to the right and Antonio Valencia moving to Jones’ right-back position. And it was the Ecuadorian’s link-up with Giggs, from a short corner, which led to United’s second on 28 minutes. Giggs and Valencia swapped passes before the veteran curled an inviting cross into the area which Nani headed into the far corner.

The Reds should have been given the opportunity to make it three just after the half-hour mark, but referee Mark Halsey somehow managed to miss Philippe Senderos’ blatant foul on Welbeck inside the area, despite having a completely clear view.

United had victory all but sealed two minutes before the break though, as Giggs ensured he kept up his phenomenal record of having found the net in 22 consecutive seasons in the top flight, albeit via a pretty big deflection. Nani weaved his way into the area before pulling the ball back to Giggs whose goal-bound shot hit Senderos and looped over the top of the helpless Stockdale.

Fulham were still keen to have a go after the break and Lindegaard had to be alert to save Dempsey’s header, from a corner, just before the hour. Moussa Dembele and John Arne Riise flashed efforts just wide soon after, while the Reds lost yet another player to injury as substitute Young was replaced by Ji-sung Park after suffering a knock to his knee.

United had struggled to keep up the momentum of the first period since the restart, but still looked a threat on the counter-attack and went close to grabbing a fourth on 66 minutes when Nani crossed for Valencia, who had burst into the area; Stockdale came out to block.

Rooney and Welbeck then both saw efforts deflected wide, while Welbeck wasted a great opportunity when put clean through by Nani after clipping the ball over the bar.

Fulham continued to probe at the other end with Lindegaard needing to be on top form to save three times from Andy Johnson in quick succession late on.

The Reds rounded things off in style when Rooney blasted a stunning 30-yard drive past Stockdale and substitute Dimitar Berbatov back-heeled Valencia's cross into the far corner to ensure back-to-back wins in London.

Anders Lindegaard
The Dane had nothing to do in the first period but was on top form after the break, making three top saves from Andy Johnson and another from Clint Dempsey. Continues to impress whenever he’s given his opportunity.

Phil Jones
A hugely disappointing night for United’s in-form defender-cum-midfielder who could face a lengthy spell on the sidelines after a first-minute elbow to the face from Dempsey eventually brought his participation to an end after 20 minutes.

Chris Smalling
An extremely impressive return to his former club and favoured position at the heart of the back four, alongside Evans. Made some vital blocks after the break as Fulham began to enjoy more possession.

Jonny Evans
Another efficient and solid performance from the Northern Ireland international who is growing in confidence with every game.

Patrice Evra
The Frenchman was rarely troubled and he made sure he got forward well to support Nani and later Young in attack.

Antonio Valencia
Another lively display from the Ecuadorian who looked bright in attack and adapted well when he had to switch back to the defence following Jones’ departure. Went close to finding the net when picked out by Nani in the area, but saw his shot blocked by Stockdale. Set  up Berba for United’s fifth.

Ryan Giggs
You begin to run out of superlatives to describe United's veteran star. Ran the show for the Reds in midfield, brilliantly set up Nani for United’s second and claimed a deflected third to make it 22 consecutive seasons of goals in the top flight.

Michael Carrick
The Reds’ in-form midfielder was on song once again. Pulled the strings alongside Giggs in the centre of the park and produced some lovely through-balls for the front men.

Nani
The Portuguese winger is such an important part of this United team with his ability to create and score goals. He did both at Craven Cottage – teeing-up Welbeck for the first with a typically mazy run down the left wing, before heading home Giggs’ centre to double the lead and then setting up the Welshman for the third.

Wayne Rooney
Wazza was his usual lively self and linked up well with Danny Welbeck in attack. Rounded off a great display with the goal of the game late on, a glorious 30-yard strike which sailed past Stockdale.

Danny Welbeck
The Manchester-born striker was full of running all night and deservedly got his name on the score-sheet with a fine finish past Stockdale after just five minutes having found space well in the box.

Ashley Young (for Jones, 20 minutes)
A frustrating night for the winger who struggled to get into the game after replacing the injured Jones and then hobbled off himself just before the hour.

Ji-sung Park (for Young, 58 minutes)
Offered good support in attack and made sure he tracked back to help out in defence as Fulham grew in confidence after the break.

Dimitar Berbatov (for Welbeck, 76 minutes)
Added the icing on the cake in the final minute of the game when he met Valencia’s cross with a deft back-heel past Stockdale to claim his 50th United goal.