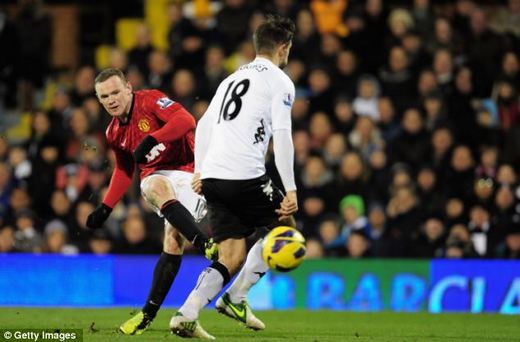 Wayne Rooney put Manchester United ten points clear at the top of the Barclays Premier League on Saturday night with a brilliantly taken late second-half strike that could well turn out to be a vitally important moment in the title race.

Sir Alex Ferguson’s side started brightly in the first half, but after a floodlight failure just before the interval the Reds seemed to lose a little of their sparkle. Fulham carried an air of threat themselves and David De Gea had to produce a string of important saves that perhaps will not get the same level of attention as any perceived error.

But it was Rooney, reaching top form at just the right time of the season, who made the decisive impact on 79 minutes when he curled a low shot past Schwarzer to clinch a victory that gives the Reds a healthy lead at the top of the league before Manchester City face Liverpool on Sunday.

The Reds went into the game having won the last five meetings with Fulham, yet the Londoners have claimed two victories and a draw in United’s last four visits to Craven Cottage. However, Fulham were without top scorer and ex-Red Dimitar Berbatov, who missed the game with a hamstring strain. The Bulgarian’s absence didn’t appear to enhance Fulham’s chances of offering a sterner test than the one provided at Old Trafford in the FA Cup last week. 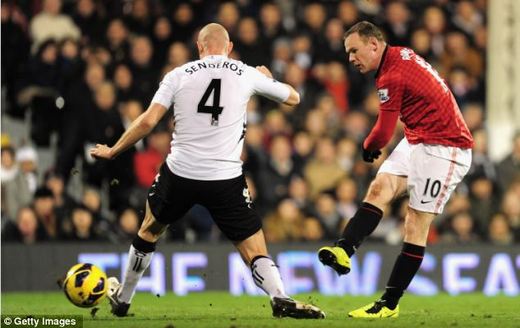 There was a gulf in class as United ran out 4-1 winners last week and Fulham boss Martin Jol admitted that his side could have conceded six or seven goals. That wasn’t the case in an entertaining and evenly-contested encounter in London, but Sir Alex’s selection of Nani, Antonio Valencia, Wayne Rooney and Robin van Persie in particular put the Reds on the front foot from the off in the first half.

United almost took the lead after eight minutes as Nani leapt to reach van Persie’s delivery from a corner, resulting in a save from Mark Schwarzer. Evra hit the bar from the rebound and Rooney followed that up with a shot that was cleared off the line. Seconds later Evra had a shot stopped by Schwarzer, while at the other end David De Gea pulled off two fantastic saves; first he turned a long-range John Arne Riise effort over the bar, then he tipped Bryan Ruiz’s low drive onto the post.

Rooney completed a frantic opening 20 minutes with a low shot that went just past the post, and ten minutes later the United no.10 hit the post from the edge of the box after good work from Nani on the wing and Cleverley’s neat lay-off. The woodwork was struck again as Brede Hangeland’s skewed headed clearance looped onto the bar. 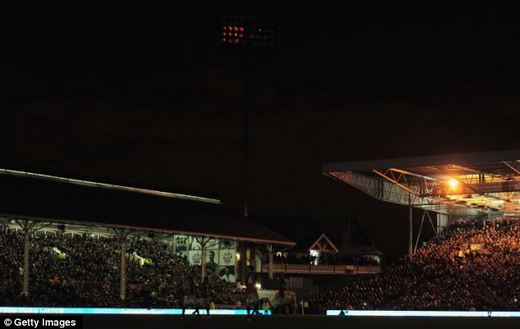 Plunged into darkness: Craven Cottage's floodlights failed causing the game to be delayed

United were frustrated by Fulham’s stout defending, the crossbar, the post and even the floodlights, which failed with around two minutes of the first half remaining, plunging Craven Cottage into darkness for ten minutes. The players had to leave the field until the lights came back and completed the half.

The start to the second half felt flat, with a tame van Persie header straight at Schwarzer and a shanked Rafael shot from 25 yards the closest United came before the hour mark. Fulham, for their part, were content to slow the pace of the game right down, putting the onus on the Reds to lift the tempo. But United’s passing wasn’t as crisp as it needed to be.

Chris Baird had an effort saved by De Gea after 63 minutes and then at the other end the combative Cottagers midfielder put the block on Nani’s shot from six yards after van Persie’s pull-back from the byline. Even so, a change was sorely needed to freshen up United’s attack, and it arrived with the introduction of Javier Hernandez in place of Valencia. The Mexican’s energy provided a purpose to the Reds' play, which had been conspicuous by its absence in the second half.

Ryan Giggs also came off the bench to replace Cleverley with 15 minutes remaining, but it wasn’t all about United trying to find the winner. Work had to be done at the back too, with Rafael clearing a shot off the line.

The all-important breakthrough hadn’t seemed to be on the cards but it arrived on 79 minutes via a moment of opportunism from United’s best player. Philippe Senderos misjudged Jonny Evans' high ball forward and Rooney capitalised ruthlessly as he surged forward into the penalty area before curling his shot perfectly round Aaron Hughes and into the bottom corner of the net.

The game wasn’t done and dusted there. Chicharito could have killed it as a contest when he ran through on goal but had a shot save, while van Persie cleared a late effort off the line and some heroic defending from Jonny Evans in particular was vital in seeing out a nervy finish.

It certainly wasn’t a classic and, as was the case against Southampton in midweek, it was the result rather than the performance that felt significant.