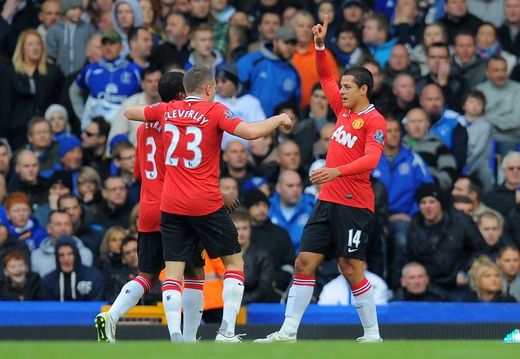 Three points were required at Everton after last week's dismal derby defeat and the champions ground out a 1-0 victory to muster the right response.

Admittedly, the Reds weren't at their most fluent - and Tom Cleverley's injury after a bright return to Barclays Premier League action was a real setback - but Javier Hernandez's 19th-minute goal proved decisive. Any suggestion that the Merseysiders would tire after being taken into extra-time by Chelsea in a midweek cup tie proved ill-founded as United had to batten down the hatches for much of the second half.

Sir Alex made five changes to the team that lost to City last Sunday with Wayne Rooney starting in a withdrawn role alongside Cleverley and Darren Fletcher, and Jonny Evans returning from the suspension he served at Aldershot.

In a breathless opening, Seamus Coleman cut inside Patrice Evra to shoot at David De Gea within the first 18 seconds and Tim Howard pulled off a good stop at the other end when Ji-sung Park tried to convert a Danny Welbeck cross inside two minutes.

United took a firm grip on proceedings and some sustained pressure led to a well-worked opener. Cleverley and Welbeck helped the ball wide to Evra and the full-back's dangerous low cross was tapped home by Hernandez with his left foot. Although Welbeck nearly latched onto a risky headed backpass by Phil Jagielka, the champions were unable to carve out too many openings and Everton came back into the match.

De Gea saved from Leon Osman after Marouane Fellaini beat Evans in the air and Jack Rodwell fired wide when afforded far too much space after Evra conceded possession cheaply. The hosts were unlucky not to draw level with 40 minutes gone as Fletcher's foul allowed Leighton Baines to curl a free-kick over the wall and past the stationary De Gea but against the bar.

Although Hernandez had a weak attempt at Howard following a slick build-up, there was no doubt Everton ended the half on the front feet as Louis Saha twice worked De Gea.

After introducing young Ross Barkley at the break, David Moyes' side continued to press but De Gea blocked a Rodwell drive after Evans gifted the ball to Coleman on the right. The champions were dealt a blow when the lively Cleverley was forced off injured and continued to make heavy weather of a tough assignement.

Welbeck finally brought Howard into action when the American pushed over the striker's shot from Hernandez's intelligent pass with the team's only real goal attempt of the second period. But, after making all three subsitutions, United struggled to find any rhythm and Everton built up another head of steam. Saha dragged wastefully wide when Coleman was better placed and was then blocked during a real goalmouth scramble.

Despite their weary legs, the hosts ensured it was a nervous finale for everybody of a Red persuasion. Coleman managed a couple of efforts through to De Gea but the Spain Under-21 keeper was rarely over-extended, in truth.

Six minutes of injury time were agonising for the away fans and Evra escaped when Magaye Guaye went down under his challenge inside the box with Mark Halsey making the right call and waving away the desperate penalty appeals. It wasn't pretty but it's three away wins in the league already this term after only five were secured during the title-winning campaign last term.

David De Gea
Brought into action after only 18 seconds when saving from Leon Osman and, again, he was probably busier than Sir Alex would have liked. The pick of his stops came from Jack Rodwell but most of the efforts did not require the Spaniard to show his quality.

Phil Jones
Pressed hard and snapped into tackles, showing real relish for the occasion. One ambitious run in the first half was unable to be repeated in a more cautious second half but he defended gallantly and was often in the thick of things.

Nemanja Vidic
The skipper tightens things up at the back and gets his head on any long balls into the danger zone. Calmed things down when required, one chest-pass back to De Gea was evidence of that, and won one classic aerial challenge with Osman that upset the home supporters. Showed some neat footwork to get out of a cul-de-sac after the interval and made one risky header past his own left-hand post from Tony Hibbert's dangerous centre.

Jonny Evans
Tussled with Louis Saha and Maroune Fellaini but managed to win some important headers. Tried to get forward on one occasion but this was all about dogged defending and ensuring there was no way through for the hosts. With a clean sheet achieved, it was a case of job done for the Northern Irishman after his red card last Sunday.

Patrice Evra
Caught out in the first minute by Seamus Coleman and, although the Irishman was Everton's brightest player, he worked hard to keep him in check. Supplied the perfect cross for Javier Hernandez's winner and had one shot blocked in the first half. Picked up a knock after a strong tackle by Coleman but soldiered on.

Ji-sung Park
Forced a save out of Tim Howard inside the opening two minutes and can be well pleased with his contribution. Busy and tenacious, he was arguably the Reds' star man in the second half as he made a number of tackles and interceptions. Unlucky to be accused of diving by Mark Halsey after a Leighton Baines tackle but he wasn't carded for it.

Tom Cleverley
Playing in an advanced role, he helped keep the tempo high and passed neatly and economically, linking particularly well with Danny Welbeck. A bright showing was ended in the 55th minute when he had to hobble off after appearing to hurt an ankle when steering a long ball forward.

Darren Fletcher
Guilty of a foul on Fellaini that led to Baines hitting the bar from a free-kick but worked tirelessly and was positionally excellent. A lot of his efforts go unnoticed but this was a decent shift by the Scot - even if he perhaps would have liked to keep possession a little better at times. Understated but important.

Danny Welbeck
Some lovely footwork carved out the early chance for Park and he did well on the left-hand side. Tracked back to cover Hibbert and was capable of threading passes through to his team-mates in the attacking third. Mustered the only real United attempt of the second half when his shot was pushed over by Tim Howard.

Wayne Rooney
Performing in a much deeper role than usual, he displayed a sure touch and was strong in the tackle. As a consequence, he never threatened apart from screwing one shot well wide but shrugging young Ross Barkley off the ball was one highlight of his display. The fact he picked up cramp late on illustrated his work-rate.

Javier Hernandez
Caught offside three times early on but not when it mattered most, glancing over to the linesman to make sure his left-footed finish to Evra's centre would count before celebrating with his colleagues. Dashed out of the wall to block a Saha free-kick and worked tirelessly for the cause, also supplying a crossfield pass for Welbeck's chance.

Nani (for Cleverley 57m)
Worked hard to try and get into the game and helped eat down the clock in the closing stages after being guilty of not making the most of a couple of decent crossing opportunities.

Dimitar Berbatov (for Hernandez 67m)
Was introduced after his Carling Cup performance at Aldershot and needed to make the ball stick in a lone striker's role. However, perhaps his most meaningful contribution was a valuable defensive header towards the end.

Antonio Valencia (for Welbeck 73m)
Added some muscle and a little more defensive security but was caught in possession in the 97th minute on the right flank which caused a few hearts to race.