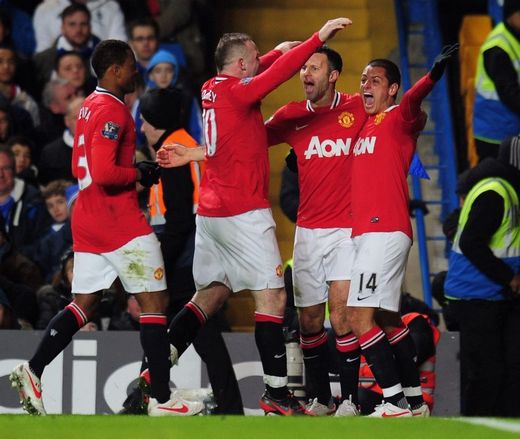 United roared back from three goals down to snatch a point in a breathless, enthralling draw with Chelsea at Stamford Bridge.

Jonny Evans' own-goal had given the Blues an undeserved half-time lead, but strikes early in the second period from Juan Mata and David Luiz had seemingly extinguished any hopes United had of closing the gap on Manchester City at the head of the Barclays Premier League table.

However, Wayne Rooney clinically converted a pair of penalties midway through the second period, before the champions' trademark spirit yet again bore fruit as substitute Chicharito headed home a leveller with five minutes of normal time remaining.

A dramatic afternoon was spared a last-gasp winner solely because of the brilliance of David De Gea, who made two stunning injury-time saves to give United tangible reward and keep the Reds within two points of the league leaders.

The Spaniard returned to action after injury, as did Rooney and Ashley Young; giving Sir Alex Ferguson a rare upper hand in the injury stakes against a Chelsea side bereft of John Terry, Frank Lampard and Ramires, while Ashley Cole and Didier Drogba were absent through suspension and international duty respectively.

Despite their absentees and apparent transition under the stewardship of Andre Villas-Boas, the Blues' September showing at Old Trafford, in which they were unfortunate to suffer a 3-1 defeat, warned against underestimating the former champions.

The contrasting formations of the two sides - 4-3-3 for Chelsea, 4-4-2 for United - made for an end-to-end spectacle, with the Blues driving in central areas and the Reds looking to spread the play wide and at pace wherever possible. The open mood was further aided by uncharacteristcally wasteful passing from both sides in the opening exchanges.

Raul Meireles drilled the game's first effort of note into De Gea's side-netting after United had failed to clear a corner, but the visitors were soon up in arms when Danny Welbeck was sent tumbling by Gary Cahill on the edge of the Chelsea area, only for referee Howard Webb to wave away the appeals.

Frustration and carelessness reigned for both sides in the opening half-hour, as possession was traded and promising openings were squandered with abandon. The Reds' clearest sight of goal came as Michael Carrick released Rooney down the right, but Branislav Ivanovic slid in to nick the ball to safety before Welbeck could tap in a simple conversion.

Fittingly, the game's opening goal was far from easy on the eye. Daniel Sturridge was allowed to pick his way to the byline on the Chelsea right, deep inside the United area. As the ex-Manchester City striker jabbed a cross into a crowded six yard box from point-blank range, De Gea flicked out a boot, but only diverted the ball against the helpless Evans, off whom it ricocheted into the unguarded goal.

As Stamford Bridge's home support revelled in a surprise lead, Sturridge immediately drew a full-length save from De Gea with a stinging drive. The remainder of the half, however, belonged to United. A curling effort from Young, a snapshot from Welbeck and a long-range rasper from Rooney all forced Cech into scurrying saves, but the absence of tangible reward for greater promise characterised the Reds' first half.

Hopes of a comeback were seemingly dashed, however, within five minutes of the restart. Chelsea's first foray forward culminated in Fernando Torres being given time to pick out a target from the right, and his deep cross fell perfectly for Mata to lash a brilliant volley into the roof of De Gea's net from six yards.

Suddenly flush with confidence, Chelsea continued to force the issue and were rewarded with a quickfire third goal. Evra conceded a free-kick in dangerous territory, which Mata whipped towards the near post and into the path of the onrushing, unmarked Luiz. The Brazilian's header was destined for the far corner, but instead hit Rio Ferdinand's shoulder and looped inside De Gea's near post.

United were shell-shocked, Chelsea rampant. Yet the champions were offered a chink of light at the end of the tunnel shortly before the hour, as Sturridge clumsily halted Evra's surge into the hosts' area. Rooney rifled the resultant penalty home to breathe new life into the contest.

Sir Alex promptly altered his side's shape, introducing Paul Scholes for Rafael and moving Valencia to right-back. Chicharito had replaced Young just before Rooney's penalty, and the narrower United were soon creating openings. Rooney drilled one shot wide and forced Cech into a sharp save with another, before he was given a second chance from the spot.

Neat interplay on the edge of the Chelsea box ended with the ball reaching Welbeck, and Ivanovic slipped, made contact with the England striker's heel and sent him tumbling to the turf. Much to the Serbian's chagrin, Webb awarded another penalty. Rooney switched sides, planting his second effort to Cech's left and putting the game firmly back in the balance.

United surged forward, inevitably leaving gaps in defence. Essien forced De Gea to tip a blockbuster over the bar, Torres dallied needlessly when given a clear sight of goal and Malouda drove narrowly over from distance. United survived each scare, however, and pressed for parity as Chelsea retreated for the final 10 minutes.

Incredibly, the Reds mustered a leveller with six minutes remaining. Rooney's shot was parried away from goal by Cech but retrieved by Giggs, and the veteran winger was criminally afforded time to pick out the unmarked Chicharito, who planted his header firmly past Cech to send the travelling fans wild.

Still, time remained for a winner from either side. Meireles headed wastefully over from a decent position inside the six yard box, but the game's dramatic denouement centred around De Gea, as the Spaniard made two superb injury-time saves.

The pick of the pair was a wonderful fingertip stop to claw Mata's top corner-bound free-kick around the post, while a 95th-minute tip-over from Cahill's scorching long-range effort preserved a vital, unlikely point for the champions.

Two points dropped in the title race? Not at all. Not when a point has been so heroically salvaged from a seemingly irretrievable situation. Never doubt the champions' ability to go the distance.

David De Gea
Will pick up some long-awaited credit for his display. No blame attached for any of Chelsea's goals, and capped a solid all-round display with two brilliant, point-saving stops in injury-time. The save from Mata's free-kick was staggering.

Rafael
United's best player in the first half; first to every ball and always positive with possession. Unhappy to be substituted as United chased the game, but can be proud of his contribution once again.

Johnny Evans
Helpless in scoring the opening goal at the wrong end, but otherwise looked calm and solid. Anticipated well and kept Torres quiet for the most part.

Patrice Evra
The Frenchman might have done better in Chelsea's opening goal, but always looked to make amends by powering forward and duly won the Reds' first penalty.

Antonio Valencia
A threatening outlet all afternoon, even when he moved to right-back. The Ecuadorian ran all day long in a sweat-soaked shift and played a major role in Chicharito's late leveller.

Michael Carrick
The calmest head in the United midfield as the Reds tried to pick their way back to parity. Seldom wasted possession and always gave his team-mates an option.

Ryan Giggs
Once again went the distance, linking up well with Carrick in the centre. Found the final pass elusive until it really mattered, when he put in a perfect cross for Chicharito to snatch a point.

Ashley Young
Might have had a penalty in the first period and was an ever-willing outlet down the left flank. Tired in his comeback game, however, and made way for Chicharito as the Reds sought a route back into the game.

Wayne Rooney
A game of two halves for the United talisman. Quiet and disjointed in the first period but absolutely central to the Reds' comeback. Shrugged off recent penalty misses with a pair of clinical conversions.

Danny Welbeck
Great movement and runs, and was very unfortunate to have his run halted by Cahill without censure. Asked plenty of questions of the Chelsea defence before his late withdrawal.

Chicharito (on for Young, 53)
Once again proved a thorn in Chelsea's side. The Blues never got to grips with his movement and he capped a superb outing with the Reds' vital leveller.

Paul Scholes (on for Rafael, 63)
Brilliant. Continues to validate his comeback by playing a key role in the United midfield. Kept the ball moving and probed with his trademark menace.

Ji-sung Park (on for Welbeck, 86)
Thrown on to shore things up after United's breathless second half charge.