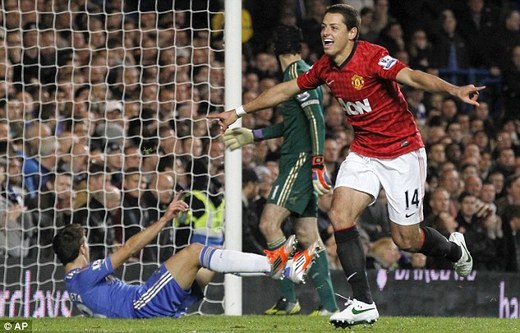 United shaded a thoroughly entertaining top-of-the-table clash at Chelsea with Javier Hernandez netting the winner after the Blues were reduced to nine men.

Chicharito's fifth strike against the West Londoners means he has more goals against them than any other opponents and it secured three vital points after the Reds had surrendered an early two-goal lead. A David Luiz own goal and Robin van Persie's clinical strike were cancelled out by Juan Mata and Ramires either side of half time.

In the second half, Branislav Ivanovic was red-carded for a professional foul on Ashley Young before referee Mark Clattenburg dismissed Fernando Torres for a second bookable offence - diving in a bid to win a foul following a clash with Jonny Evans.

The clocks may have gone back in the morning but the Reds made a lightning start to catch the leaders napping. Van Persie warmed Petr Cech's hands following a neat turn after three minutes and the opening goal arrived from the next attack. Wayne Rooney exchanged passes with Young and pulled the ball back invitingly for van Persie.

Although the Dutchman's thumping drive crashed off Cech's left-hand upright, it rebounded back into the net via Luiz for a strike not dissimilar to the first goal in this fixture last term when Evans unluckily put through his own net. Attacking with real purpose, the visitors went further ahead when Rafael's fine ball down the line fed Antonio Valencia and the Ecuadorian drilled in a centre that van Persie blasted beyond Cech for his sixth goal in his last three games at Stamford Bridge.

Chelsea mounted an inevitable response with Luiz's swerving free-kick booted away by David De Gea and Eden Hazard pulling a shot wide following an outstanding jinking run. With Rio Ferdinand making some important clearances, despite being booed by the home crowd, United seemed in control until Roberto Di Matteo's team upped the pressure as the break approached.

Evans deflected a John Obi Mikel cross against the outside of his own post from a quick throw-in and the tireless Rooney diverted Gary Cahill's header off target from the resulting corner. It became one-way traffic and only a brilliant diving stop by De Gea kept out Torres' header from a Mata cross.

It became merely a question of whether the Reds could hold on until the half-time whistle and Rooney's rash trip on Hazard, earning a rare yellow card for the England international, presented Mata with an ideal opportunity in the centre of the goal, just outside the box. The Spaniard, thwarted by a De Gea wonder-save in the closing stages of last term's 3-3 draw, this time got the better of his compatriot with a perfectly-placed free-kick.

A poor kick-out by De Gea allowed Mata to scamper onto a Torres pass but the keeper atoned with a fine block as United went into the interval with a slender lead. Despite starting the second period with more attacking threat, Luiz handling a Valencia centre from close range inside the box, Sir Alex's side conceded an equaliser eight minutes into the half.

Mata showed great control after Evans felt he would not reach a long ball and, although his cross brushed off Ferdinand's head after the No 10 was forced wide, Oscar recycled it into the box for Ramires to outjump Tom Cleverley and head in for 2-2. With Chelsea's tails up, only De Gea's near-post save denied Hazard after he skipped past Rooney and the Belgian was then unable convert a superb pass by Mata.

The Reds rolled with the punches and started to emerge as a force again with van Persie unable to reach a Young cross and Rooney's header blocked from Valencia's ball into the area. Suddenly, the tide completely turned against the European champions as Ivanovic clipped Young's heels when he capitalised on a fine spin and pass by van Persie to race through. Referee Clattenburg had no option but to show the red card to the Serbian defender.

After Rooney's free-kick sailed over the top, there was real controversy when Torres was shown a second yellow card for simulation after making a meal of minimal contact from Evans. There is no doubting it was a harsh call by Clattenburg, even if the Spaniard's first offence was a dreadful challenge on Cleverley - and it left the hosts down to nine men with 22 minutes still to play.

Van Persie blazed one attempt off target but forced Cech to stretch and save with his fingertips from a 75th-minute snap-shot. The ball was spinning agonisingly towards goal but instead rolled against an upright with the Blues keeper scooping it away. However, the danger had not passed with Rafael firing into the six-yard box where Hernandez, coming back from inside the goal, touched home in predatory fashion.

TV replays showed the Mexican may have been fractionally offside when the full-back connected with the ball although, in real time, there looked at least two defenders between him and the goal. To Chelsea's credit, they refused to accept defeat as Ramires hammered a speculative effort over the top and Di Matteo introduced striker Daniel Sturridge for Hazard.

Hernandez volleyed over with four minutes left from a Young pass as United found holes in the Chelsea defence late on. Five minutes of injury time failed to provide any further addition to the scoreline although Valencia, unfairly cautioned for diving, screwed a poor finish wide following neat play by Hernandez. United still completed the job in professional fashion to narrow the gap at the top to a single point and end the capital club's unbeaten start to the league campaign.