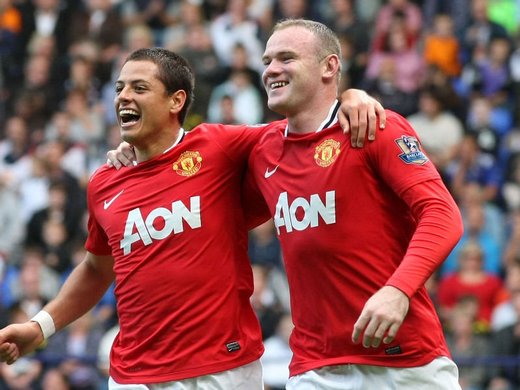 United's mesmerising start to the Barclays Premier League season continued with a five-goal stroll at Bolton's Reebok Stadium, as Javier Hernandez struck his first goals of the campaign and Wayne Rooney extended his fine form with a second successive hat-trick.

The Reds turned in a devastating showcase of finishing, bagging three goals inside the first half-hour and a further pair after the break, and also demonstrated promising defensive resolve in the face of a characteristically direct bombardment from the hosts.

The only sour note of the afternoon was a derivative of the Trotters' trademark vigour, as Tom Cleverley left the Reebok Stadium on crutches after a heavy challenge from Bolton skipper Kevin Davies, having apparently suffered a damaged ankle.

Hitherto, Sir Alex Ferguson had enjoyed good news with injuries after the recent international break, and made only minimal changes to the line-up which started last month's romp against Arsenal. Danny Welbeck, who suffered a hamstring strain against the Gunners, was replaced by Hernandez, while Rio Ferdinand returned at the expense of Chris Smalling and Phil Jones shunted over to right-back.

As had been the case in the Reds' opening three league games, United began in proactive fashion. Indeed, it took the visitors just five minutes to forge ahead. As a United attack built on the right wing, with Rooney releasing Nani, Chicharito outwitted Gary Cahill by shaping to move to the near post, feinting to the back and then sprinted forward just in time to redirect Nani’s centre past the sprawling Jussi Jaaskelainen.

United had actually taken the lead without a full compliment of players. At the time of the goal, Cleverley was receiving treatment for an ankle injury after a poor challenge from Davies. Bolton had their best opening of the half while Cleverley was en route to the dressing room, but Rooney was on hand to hack Chris Eagles’ volley off the line after a goalmouth scramble. Michael Carrick was duly introduced to restore equality in personnel.

Bolton skipper Davies was booked for a lunging challenge on Evra and Ivan Klasnic brought a spectacular save from De Gea with a stinging effort from the edge of the box, but the hosts’ defiance was soon doused by a devastating spell of attacking from United.

Jones took a quick throw-in and, upon receiving the ball straight back from Chicharito, arced an unplayable cross into the heart of the Bolton area, where the onrushing Rooney needed only brush the ball with the studs of his right boot to double United’s lead.

Jones was the epicentre of the Reds’ celebratory huddle, and the makeshift right-back was again the hub of joy five minutes later. Having swapped passes with Nani, the marauding youngster strode through the Bolton midfield and defence and, although his shot was saved by Jaaskelainen, Rooney carefully tucked the rebound between the desperate lunges of Cahill and Dedryck Boyata to heap further misery on the hosts.

Fresh from the eight-goal salute to Arsenal, another attacking frenzy was underway. Hernandez appeared to have turned in United’s fourth just two minutes later, but his neat finish applied to a Nani cross was correctly rendered illegal by an assistant’s flag.

The game lulled for the final third of the half, as rampant visitors and shell-shocked hosts drew breath. Kevin Davies swiped air rather than ball after a decent Martin Petrov cross and Nani fired into the side-netting from close-range, but the interval came with United exuding comfort.

Were any reminder required that Bolton can never be taken lightly, especially at home, it was served by Klasnic within two minutes of the restart. Fortunately, De Gea had the smart reflexes and handling to field the Croatian's low snapshot.

At the opposite end, Jaaskelainen did well to flick Anderson's wicked free-kick wide of the post, but relied on his defenders to dig him out of a hole after Hernandez had stolen possession outside the area. The Mexican didn't have to wait long, however, to double his tally, sliding home from close range after Michael Carrick's shot had rolled through a thicket of bodies.

Bolton's response to the fourth goal was positive, as Nigel Reo-Coker crashed a shot against De Gea's crossbar, before both sides rang the changes. Kevin Davies made way for David N'gog and Darren Pratley replaced ex-Red Chris Eagles for the hosts, while Sir Alex introduced Ryan Giggs and Smalling at the expense of Ashley Young and the limping Evans.

The amendments did little to stifle the flow of the game, as United popped passes around with abandon. Nor did it stem the tide of goals, as Rooney smashed home his second successive hat-trick. A raking ball from Giggs found Nani, who rolled the ball across the edge of the area for Rooney to curl an unstoppable shot into Jaaskelainen's bottom right-hand corner.

Hat-trick secured, Rooney soon attempted to serve up another treble for Chicharito, but his centre was narrowly behind the Mexican striker. Late on, Chicharito was played in by Nani, but unselfishly attempted to square for the excellent Anderson, who couldn't quite convert into the gaping goal.

No matter, five more than sufficed to prolong the early-season excitement surrounding this United team. There's enough experience in the Reds' ranks to avoid getting giddy just over a week into September, but the verve and swagger about this bunch of twinkling talents renders caution harder by the week.

David De Gea
Made a mockery of pre-match speculation over his inclusion, proving decisive throughout and making rock-solid saves when Bolton sporadically threatened.

Phil Jones
The boy is fast looking a sensation. Having shone at centre back, the summer signing showed that he can also star as a marauding right-back too, notching a pair of assists and rarely putting a foot wrong.

Jonny Evans
Another impressive outing from the Northern Ireland international, who withstood the bulky prowess of Kevin Davies in almost total comfort.

Rio Ferdinand
A serene return to action for the veteran defender, who came back from a two-match absence to lend invaluable experience to the Reds' backline.

Patrice Evra
Withstood a poor challenge from Davies early on and dominated his battle with ex-Red Chris Eagles, bombing forward repeatedly to help out in attack.

Nani
Teased and tormented Paul Robinson all afternoon, putting in an unplayable cross for Chicharito's opener and playing a part in four of the Reds' five goals.

Tom Cleverley
A nightmare for the youngster, who was given just five minutes before a poor tackle from Kevin Davies curtailed his afternoon and his start to the season.

Anderson
Omnipresent at times. The Brazilian is showing the benefits of a sustained run of fitness and involvement, and he is revelling in United's mantra of one-touch pass-popping.

Ashley Young
A slightly quieter afternoon for the England winger, as the majority of United's attacks came down Bolton's left flank, but nevertheless a solid display to prolong his fine start to life at the Reds.

Wayne Rooney
Magnificent, once again. Three shots spawned three goals and a second successive hat-trick, and he is pulling all the strings in United's new-look attack.

Javier Hernandez
Took only five minutes of his first start of the season to score, and looked absolutely lethal throughout. How his first hat-trick eluded him remains a mystery, but it will come sooner rather than later.

Michael Carrick (on for Tom Cleverley, 8 mins)
Thrown into the mix in difficult circumstances, but brought his trademark cool and calm to the United engine room and turned in a typically effective performance.

Ryan Giggs (on for Young, 68 mins)
Even when he comes on in an already one-sided game, Giggs has a galvanising impact. Wonderful pass to Nani in the build-up to Rooney's hat-trick strike.

Chris Smalling (on for Evans, 68 mins)
Rested after his England exertions, the hulking defender slotted seamlessly into the heart of defence against a Bolton side pushing for late consolation.