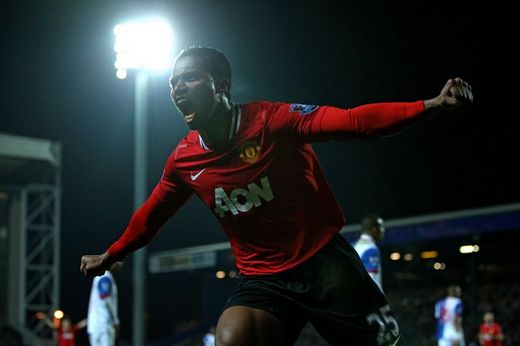 United took a huge step towards a 20th league title with a priceless victory over Blackburn at Ewood Park, secured by superb late goals from Antonio Valencia and Ashley Young.

Sir Alex Ferguson's side ground down a dogged Rovers side over the course of an attritional 90 minutes fraught with occasional scares, but ultimately settled by another decisive contribution from Valencia.

While Valencia's display was the outstanding individual contribution, it took a collective heave from United to secure victory, from the last-gasp heroics of David De Gea and his defence to the tireless running of Wayne Rooney, through the limitless patience of the ever-probing Paul Scholes and Michael Carrick.

Sir Alex approached the game with the deployment of three central midfielders, giving Phil Jones his first start at Ewood Park since his transfer to Old Trafford, alongside Paul Scholes and Michael Carrick in midfield. Wayne Rooney and Valencia operated on the left and right flanks respectively, leaving Chicharito as the spearhead of the United attack.

The Mexican had the game's first opening inside five minutes, as Grant Hanley failed to deal with Rooney's flighted diagonal ball. Under pressure from Martin Olsson, however, Chicharito could only scuff his left-footed volley wide, and the striker's frustration grew soon afterwards.

Valencia, who linked fruitfully with Rafael down the right flank throughout the first period, drilled in a low, right-wing cross which Hernandez redirected against the base of the Rovers post, only for the ball to the back of Paul Robinson, who showed great dexterity to turn and grasp the ball on the line.

United's general confidence in possession suggested a breathrough was inevitable, but Blackburn served notice of their dormant threat in the 18th minute when Junior Hoilett surged from midfield and unleashed a curling, 25-yard effort that De Gea spectacularly punched away.

The hosts' tight, clustered formation meant United's dominance of the ball was given little chance to spawn clear openings. The Reds' first corner, gained just after the half-hour, yielded a chance for Jonny Evans but, after a goal and an assist in his previous two outings, the centre-back could only curl a low shot at Robinson, rather than around him.

Suitably buoyed by that chink in the hosts' armour, the visitors stepped up the pace again. Valencia, enjoying himself as United's most menacing outlet, slung in a superb back-post cross that the unmarked Jones could only direct wide of the upright. Blackburn quickly regrouped, however, and resumed their gameplan of containment.

Scott Dann sprung to the fore in the opening stages of the second period. The Blackburn defender might have done better with a header inside the United area, but then did brilliantly to nod Jones' cross away from the lurking Chicharito. Rooney and Rafael then drew full-length saves from Robinson, who turned away the striker's free-kick and beat the Brazilian's stinging drive to safety.

However, as in the first period, United's pressure also brought reminders of Rovers' perennial threat, and Yakubu chanced his arm twice in a minute. The Nigerian slashed wildly off-target when presented with the ball by Carrick's slack pass, then drilled past De Gea's near-post after being forced wide by Ferdinand.

The veteran defender then crucially mopped up after De Gea had spilled Pedersen's fizzing free-kick into a dangerous area, before the Norwegian winger slammed home a clinical 20-yard finish. Fortunately for United, the ball had already been run out of play by Steven Nzonzi in the build-up.

Thereater, United grasped full control of the game, pushing forward relentlessly. Ryan Giggs and Danny Welbeck replaced Jones and Chicharito, further thickening the plot for a Blackburn side manfully withstanding the visitors' onslaught, despite the best efforts of the 7,000 baying visiting supporters in the Darwen End.

It was almost the home contingent in revelry with 12 minutes remaining when the ball looked set to break for Yakubu deep in the United area, but a superb last-gasp interception from Ferdinand heroically averted the danger. That moment would prove pivotal.

For seemingly the umpteenth time, the ball was ferried to Valencia on the right flank and the Ecuadorian immediately made a beeline for the hosts' box. He was barely inside it when he unleashed a scorching effort with the outside of his right boot from an angle that belied its intent, yet the ball nestled emphatically in Robinson's far corner.

The Darwen End writhed in delirium and collectively bellowed: "We're gonna win the league," a chant soon given a second airing when substitute Young, on for Scholes, picked up possession from Valencia, faked inside and drilled home a superb low shot that arced just inside Robinson's left-hand post.

Another major hurdle cleared, another sizeable step in the right direction from a United side who have built up menacing momentum as they pound down the home straight.

David De Gea
Produced three spectacular saves in the first period, most notably his fabulous tip-over from Jonas Olsson, and claimed a deserved clean sheet. The difference between this display and his nervy December outing against Rovers was resounding.

Rafael
Linked superbly with Valencia down the right flank, and between them the South Americans dominated the Olsson twins. Showed impressive touch throughout and repeatedly surged forward as United sought to press the issue.

Jonny Evans
Showed confidence in possession, repeatedly carrying the ball forward, but also displayed plenty of muscle against Yakubu. Continues to play a key role in the central defensive triangle along with Ferdinand and De Gea.

Rio Ferdinand
Like Evans, more than happy to carry the ball into space afforded by Blackburn's disciplined approach. Shone in the second period with two key interceptions; firstly clearing after Pedersen's free-kick had been spilled and then crucially blocking Yakubu's close-range effort.

Patrice Evra
Often isolated as the left-sided attacking threat as Rooney drifted inside to contribute all over the field. Nevertheless, the Frenchman continued to manfully press forward and rarely looked troubled defensively.

Antonio Valencia
Patrice Evra claimed in January that the Ecuadorian 'ate a motor'. He's been at the petrol, then, as he kept United's title challenge in the fast lane with an unstoppable display capped by a scorching goal.

Michael Carrick
Comfortable for the most part. Kept possession well and characterised the patient approach required to wear down the hosts. Did have one heart-in-mouth moment when he presented the ball to Yakubu, but played well enough to earn his reprieve.

Phil Jones
Back at Ewood Park for the first time as a United player, the Rovers youth product kept things simple in central midfield and picked up some key playing time in his hour of action.

Paul Scholes
Utterly flawless once again. It's no coincidence that his return has coincided with United's stunning domestic form, and he once again pulled all the strings as the Reds probed with intent.

Wayne Rooney
A selfless display out on the left flank, though he repeatedly moved infield to contribute wherever he could. Remained a noticeably calming influence throughout, especially when the Reds were protecting their late lead.

Chicharito
An evening of frustration for the Mexican, who was desperately unlucky to see his shot hit Robinson's post and somehow stay out. Put in plenty of running, but found his touch wanting before he made way for Welbeck.

Danny Welbeck (on for Chicharito, 61)
His introduction gave the Rovers defence another problem to deal with, and his half-hour cameo showed plenty of enthusiasm and energy.

Ryan Giggs (on for Jones, 63)
The key change. Added extra guile to the attack and piled on the conundrums for the hosts.

Ashley Young (on for Scholes, 79)
Another inspired introduction. Livened up an already menacing Reds attack and capped his cameo with a brilliantly-taken killer goal.