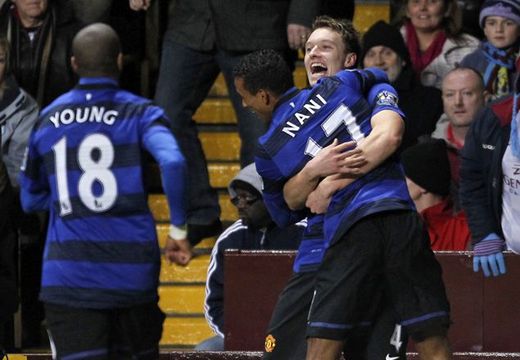 After convincing wins for the other teams in the title race prior to kick-off, the pressure was on the champions going into this away clash. But Villa Park is traditionally a happy hunting ground for United and Sir Alex's team collected three points thanks to Phil Jones' first-ever goal at senior level.

The visitors were rarely troubled after the 20th-minute strike and were good value for victory at a ground where the Reds are unbeaten in the league since the start of the 1995/96 season. The manager will be pleased to secure another success after three matches without a win in the fixture that sees him overtake Sir Matt Busby's league record of 972 games in charge.

Ashley Young played against his old club for the first time with Jones partnering Michael Carrick in midfield and Chris Smalling rewarded for a fine display in midweek with the right-back slot. Anders Lindegaard was preferred to David De Gea in goal.

After a sluggish opening, there was a lengthy stoppage when Javier Hernandez went down in some pain, after turning on his ankle, and was taken off on a stretcher with suspected ligament damage. On came Antonio Valencia, with Nani switched to a central role, and the champions took control with Smalling having a shot on the turn blocked after Nemanja Vidic got his head to a Young corner.

With 20 minutes on the clock, Jones beat Shay Given with United's first shot on target. Patrice Evra found space in midfield and fed Nani on the left and his accurate cross allowed Jones to cushion in a volley, and enjoy his moment of celebration by exchanging a wave with Sir Alex and the coaching staff on the bench.

Soon afterwards, an error by Richard Dunne gifted Wayne Rooney possession and the ball was relayed to Nani via Valencia, only for Given to push away the Portugal international's header. United assumed total command and Valencia blasted a terrific effort just over the bar after picking up a loose ball in midfield ahead of his team-mate Rooney.

The stop-start nature of the first half continued when Given was taken off with a hamstring injury and replaced by Brad Guzan, who had only appeared in the Barclays Premier League once before. United were unable to test the American before the interval, despite eight minutes of injury time being played, but it was Villa who were jeered off when the half-time whistle sounded.

Although dominant, United failed to really press home the advantage after the break. Rooney tricked his way past Barry Bannan but his shot deflected wide without a corner being given and Nani's effort was easily fielded by Guzan. Villa twice gifted the ball to blue shirts, only to recover with saving tackles from Stephen Warnock and James Collins on Rooney and Jones respectively.

But there was no real fluidity to the match as Jermaine Jenas became the latest injury victim, while Sir Alex opted to bring Rio Ferdinand off and shuffle things around with Jones dropping into defence. Inevitably, Villa finally carved out some openings themselves but substitute Emile Heskey was unable to convert a Dunne flick-on at the far post and James Collins' header was tipped over by Lindegaard after more approach work by the Irish defender.

Young mustered a low shot wide and a tame shot straight at Guzan as the Reds realised the need to get the job done. Indeed, Sir Alex threw on fit-again striker Danny Welbeck, in place of winger Young, in recognition of the need to provide a greater threat at the other end. Rooney almost wrapped it up when linking well with Carrick but flashed a volley over the bar with a few minutes remaining.

Welbeck had the ball in the net in the closing stages, but was rightly flagged offside after Rooney delayed his pass and Heskey's misplaced shot, as stoppage time approached, proved to be Villa's final effort. Another clean sheet for United and an important victory to close the gap on leaders City back to five points. Since the derby defeat, it's been all about defending from the front and the team once again did that perfectly.

Anders Lindegaard
Another clean sheet for the Dane who seems to make a habit of stacking up shut-outs. Came out to fist the ball away on occasions but was rarely troubled by the lacklustre home side. His best save was a tip-over from a James Collins header in the second half but he'll have busier days.

Chris Smalling
Handled the speedy Gabriel Agbonlahor magnificently, making an early challenge to set out a marker and even outpacing the Villa star at one point. Always physical and stuck to his man throughout. A real talent who seems to love defending.

Nemanja Vidic
His powerful header away in the dying seconds, which also happened to pick out a team-mate, sums up the captain's contribution. A huge influence at the back and incredibly consistent, he was badly missed in the defeat to City but took care of Darren Bent all evening.

Rio Ferdinand
Unflappable and largely untested in his 64 minutes on the pitch. A neat ball wide to Ashley Young was one of many accurate passes and he snuffed out Villa's threat with ease, moving across to the flanks when necessary to use his experience.

Patrice Evra
Handled Marc Albrighton well and performed his defensive duties with minimum fuss. One needless concession of a corner aside, he was largely flawless and one intelligent header down the line to Young was an example of the support he provides to those going forward. Indeed, it was his pass to Nani that led to Phil Jones' goal.

Nani
Switched to a more central role after the injury to Javier Hernandez and buzzed around causing problems for the static central defenders. Instantly looking dangerous, it was his excellent cross that allowed Jones to net and he continued to show lovely balance and a range of skills, including a neat backheel in the second half. One long-range shot forced a simple save out of Brad Guzan.

Phil Jones
His first effort cleared the bar by some distance but it was only a sighter as he cleverly opened up his foot to guide in Nani's cross for his first senior goal. Looked relaxed and assured in midfield before switching to central defence and making one excellent headed clearance.

Michael Carrick
Pivotal to much of the play in terms of winning the ball in midfield and passing intelligently. His outstanding distribution will be missed in Basel on Wednesday but he showed his vision with some tremendous balls out wide and set Wayne Rooney up for a late chance.

Ashley Young
Was booed when making his first touch but appeared to earn a mixed response from the home fans in general on his return to Villa Park. Hugging the left wing, he wasn't involved as much as he would have liked but had a couple of second-half efforts before being replaced by Danny Welbeck.

Wayne Rooney
Dropped off to cause Richard Dunne no end of problems and his clever play was behind many of United's best attacks. Drilled the best pass of the match out wide to Antonio Valencia at the end of the first half and nutmegged Barry Bannan only to see his shot deflect wide after the interval. Blasted over the bar after working a fine one-two with Carrick towards the end.

Javier Hernandez
Injured before he got going and faces a month on the sidelines with ankle ligament damage. Fell awkwardly when trying to make a trademark dart into the box and was taken off on a stretcher in considerable discomfort.

Antonio Valencia (for Hernandez, 8 minutes)
Soon involved and drifted infield to cause problems. A long-range piledriver was just too high and, although he wasted one opportunity of a break, he then teed up a Nani blocked shot seconds later to show how valuable he can be in the attacking third.

Ryan Giggs (for Ferdinand, 64 minutes)
dds composure whenever he's on the pitch and uses his football brain to good effect. Made one sweeping pass to Valencia and also supplied a decent ball to Rooney as he played his part.

Danny Welbeck (for Young, 79 minutes)
His first touch was poor but he displayed his trademark confidence by instantly getting a second and body-swerving past his opponent. Injected energy into the forward line and had the ball in the net but was rightly flagged offside in the closing stages.