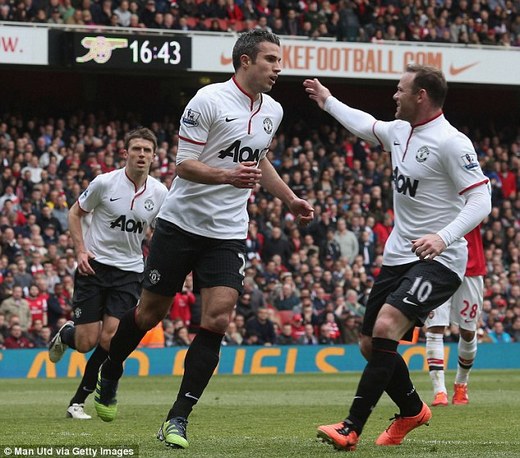 Manchester United’s first outing as Barclays Premier League champions may have ended in a 1-1 draw against Arsenal – and with it the potential to set a new record points total – but this was undeniable entertainment to begin the Reds’ four-match victory parade.

Arsenal played their part in a clash that recalled at least some of the quality and commitment of old in this fixture. Theo Walcott scored after just two minutes in an opening half hour that the Gunners controlled, but after that United came back into the contest and Robin van Persie – who else? – won and converted a penalty kick before the break on his first return to the club he left in search of the silverware he has taken just eight months to acquire at Old Trafford.

Arsene Wenger's players commendably formed a guard of honour for United and, despite a smattering of boos for van Persie who emerged last out of the tunnel, this was no cauldron of hate. The home fans were allowed a moment of schadenfreude, however, when van Persie’s seemingly innocuous misplaced pass in the second minute allowed Arsenal to break and Tomas Rosicky’s threaded pass set Theo Walcott racing toward goal. The winger, who was offside as the ball was played, slotted his shot past David De Gea to give the Gunners the lead.

This was not unusual territory for United, who had already recovered 28 points from losing positions this term, this being the 15th occasion in which the Reds have conceded the first goal in a league game in 2012/13.

Perhaps it was the purpose of chasing a Champions League place or the motivation of van Persie’s return as a league winner, but Arsenal played with an aggression to accompany their agility on the ball. After a few strong early challenges from the home side it was surprising that, on 18 minutes, Phil Jones was the first of four first-half bookings for United after a committed challenge on Arteta. Undeterred, United’s no.4 went on a rampaging run from midfield, linking first with Rooney and then van Persie, whose lofted cross was a glorious invitation to level matters, but Jones’ header was misdirected from eight yards. His first goal of 2012/13 will have to wait. 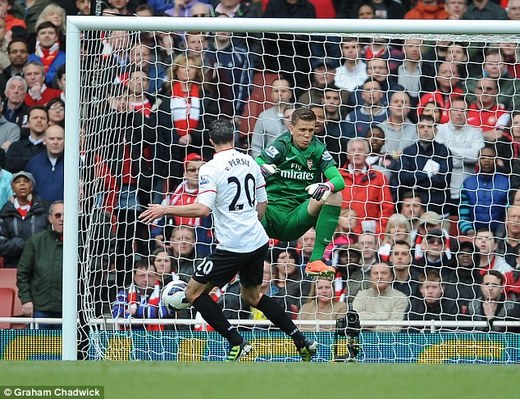 Arsenal had the better of the early first-half play; always lively in central positions and looking capable of opening up United’s defence. On one such occasion, Lukas Podolski forced a save from De Gea with a powerful shot from a tight angle after 32 minutes. But United grasped control and finished the half as the stronger side and, indeed, on level terms. On 39 minutes, Nani broke away down the left and crossed for van Persie, whose header from point-blank range struck Szczesny in the face, and two minutes later Jones headed wide again from an arcing Antonio Valencia cross.

It was in the 43rd minute that the equaliser arrived. Van Persie capitalised on Bacari Sagna’s mistake and raced into the box. Sagna, attempting to recover, slid in and although he touched the ball he completely wiped out his former team-mate. The Dutchman faced resounding boos as he placed the ball on the spot, but he is just too cool and, totally unflustered, he smashed his spot-kick high into the net to level the scores and complete an entertaining half. 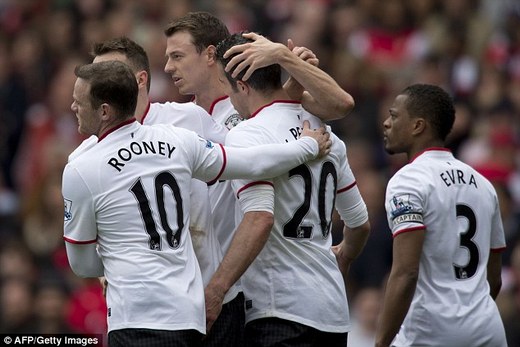 Attacking intent from both teams was equally evident in the second half, but United continued to look the more dangerous in front of goal as Rafael fired a 54th-minute shot over the bar and two minutes later Rooney latched onto a Patrice Evra cross but headed the ball into the ground, which Szczesny held. The tackles continued to fly in too, and Sagna could consider himself lucky to stay on the field for a wild, late challenge on Evra.

Unsurprisingly given the high pace throughout the game, both sets of players began to tire as the match entered its final 20 minutes and Arsenal tried to arrest that leggy play by introducing Jack Wilshere, Gervinho and Alex Oxlade-Chamberlain, while Anderson came on for Rafael, with Jones moving to right-back.

The pace naturally dropped towards the end but the match remained tantalisingly open as both sides continued to take it in turns to slog it out on the attack, like weary boxers in the final rounds of a bout. Late on, De Gea made a good save from Santi Cazorla, while substitute Ryan Giggs agonisingly had a shot deflected wide. In the end, it was a share of the points and, although United created more opportunities to win it, with the title already won there can be few complaints at the outcome.