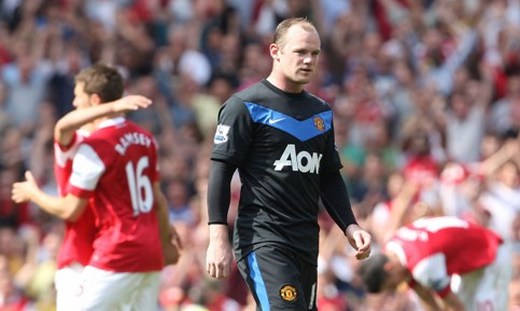 United slipped to a 1-0 defeat at Arsenal, setting up a virtual title decider with Chelsea next Sunday at Old Trafford.

Aaron Ramsey, who chose to join the North Londoners ahead of the Reds, scored the only goal of the game to inflict a fourth defeat of the Barclays Premier League campaign on the leaders.

Substitute Michael Owen was denied a late penalty when being brought down inside the box with a couple of minutes remaining after Nemanja Vidic appeared to escape conceding a spot-kick for a handball in the first half. But the Reds were not at their best and rarely replicated the sort of form displayed against Schalke in midweek.

Sir Alex Ferguson opted for Fabio at right-back and Nani in preference to Antonio Valencia with Anderson drafted into the midfield while the Gunners were without Cesc Fabregas, who injured a thigh in training.

Even without their captain, the hosts started brightly in the sunshine and dominated early possession - although Edwin van der Sar wasn't called into action.

Jack Wilshere lashed a great opportunity wide after a rare slip by Vidic, who cleared straight to the young Englishman, but the Reds' skipper was at his best to pressure Theo Walcott into firing a Robin van Persie cross over the bar soon afterwards.

Patrice Evra was on the top of his game to stretch to divert a van Persie centre away from Walcott and it took some time for United to fashion a threatening move. When it came, Fabio burst onto a Nani pass and stayed on his feet despite a risky challenge inside the box, only to be unable to pick out Javier Hernandez in the middle.

There was a nervous moment on 32 minutes when Vidic appeared to get a feint touch with his fingertips to a Walcott cross with van Persie lurking behind him. Only the Dutchman really appealed but, no doubt, it was a talking point and it did seem to be a moment of madness from Vidic.

Aaron Ramsey and Wayne Rooney traded off-target shots before the Reds striker was harshly booked by Chris Foy for a nudge on Wilshere. Wojciech Szczesny was finally brought into action before half-time when gathering Anderson's tame attempt following a more encouraging move which involved Nani and Evra.

United carried more threat after the break with Rooney forcing a save out of Szczesny with a free-kick and Evra ramming the rebound into the side-netting, while Nani delivered a great cross that just evaded Hernandez before sending his own set-piece effort bouncing wide.

But Arsenal broke through on 56 minutes, seconds after Antonio Valencia replaced Anderson in midfield and the players were still reorganising. Wilshere fed van Persie on the right and the striker was afforded too much time to pick out the unmarked Ramsey, who guided his shot past van der Sar and into the corner of the net.

United needed to muster a response and Vidic headed wide from a Nani corner before the manager replaced Hernandez with the league's top goalscorer Dimitar Berbatov.

The visitors finally started building up a head of steam as Ramsey handled a Michael Carrick cross on the edge of the box, arguably inside, but Rooney's free-kick was comfortable for Szczesny.

Rooney did well to find Nani during one smart break but the Portuguese winger's shot was beaten out by Szczesny, although the Gunners still looked dangerous themselves with van Persie a constant threat.

Owen joined the Reds' attack, in place of Carrick, but was denied what looked a blatant penalty with a couple of minutes left when turning Clichy inside the area. Referee Foy waved away the appeals and there was to be no late drama with the team needing to pick themselves up for two huge games in the coming week.

Edwin van der Sar
Looked as safe as houses and didn't make a save of note all afternoon. However, he was unable to get his fingertips to Aaron Ramsey's low shot which handed the points to Arsenal, despite a desperate dive.

Fabio
One of the biggest plus points as his positive approach continues to impress. Bombed forward wherever possible and almost picked Javier Hernandez out after one dart into the box when he could've tried to win a penalty but stayed on his feet. Tenacious as ever, he picked up a yellow card.

Patrice Evra
Made one goal-saving intervention to deny Theo Walcott at the far post and tangled with the England winger in the other box when racing onto a pass by Ji-sung Park. Was unable to prevent Robin van Persie from teeing up Ramsey for the winner.

Rio Ferdinand
Looked desperate to cruise forward and get attacks started but concentrated on his defensive duties, which he filled with customary coolness. Won important headers all match and made one excellent tackle on Ramsey inside the area.

Nemanja Vidic
After getting away with one unusually poor clearance that was drilled wide by Jack Wilshere, the skipper was fortunate to escape a handball from a Walcott cross. Otherwise, he was very stout and domineering and sent a header wide with one of United's rare attempts on goal.

Nani
Embroiled in a fascinating duel with Gael Clichy throughout but was forced to show his defensive nous as well when backtracking on several occasions. Always the creative spark his colleagues looked to, he had a few shots on goal, and was denied by Wojciech Szczesny late on.

Michael Carrick
Composed and tidy as ever, breaking up attacks with his intelligent positioning and passing sensibly. One tackle on Laurent Koscielny when he broke out of defence was top class and he felt Ramsey handled his cross inside the penalty area, even though a free-kick was awarded instead.

Anderson
Fired some inventive passes out wide to Nani but his radar wasn't at 100 per cent in the first half. Managed a tame shot at Szczesny but was substituted in the second half.

Ji-sung Park
Worked hard and battled for the ball but was still getting accustomed to switching infield when Ramsey was left unmarked to steer in the only goal. Most of his work was attritional rather than attractive.

Wayne Rooney
Tried in vain to spark United and started breaking with more menace in the second half forcing Szczesny into a diving save with a decent free-kick. Another set-piece lacked power and he was unable to perform another rescue act.

Javier Hernandez
Unable to get involved and was flagged offside on several occasions when trying to get in behind the Arsenal defence. Was inches away from meeting a Nani cross from the right but failed to get in any shots and was substituted for Dimitar Berbatov.

Substitutes
Antonio Valencia (for Anderson, 56 mins)
Miscued his first cross when played down the right and, although he managed a supply line of dangerous balls into the area, he was unable to have a vital impact.

Dimitar Berbatov (for Hernandez, 74 mins)
Found it hard to quickly adapt to the pace of the game with the Reds chasing an equaliser but made a couple of touches in and around the Gunners' box.

Michael Owen (for Carrick, 85 mins)
Only had a few minutes but it was enough time to be denied what looked a stone-wall penalty after being felled by Gael Clichy. Always looks determined to get into the danger zone to make things happen.