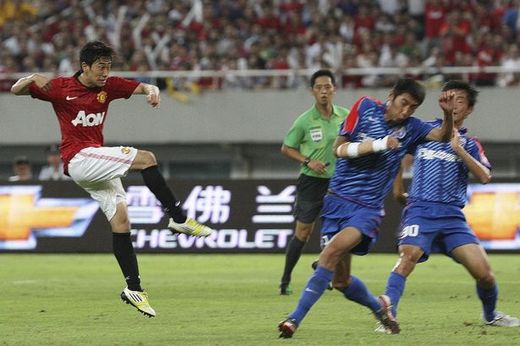 Shinji Kagawa scored his first goal in a Manchester United shirt as the Reds beat Shanghai Shenhua 1-0 on Wednesday to claim the Chevrolet China Cup.

Kagawa, who was later named man of the match, blasted home via a deflection on 68 minutes to hand Sir Alex's men victory in the Reds' only Asian pre-season fixture of the DHL 2012 Tour.

Despite the win, the Reds struggled in Shanghai's heat and humidity to play at pace and again looked disjointed for long periods.

Shanghai Shenhua, without former Chelsea stars Didier Drogba or Nicolas Anelka (neither was named in the matchday squad), didn't help matters, mind you. The home side effectively parked the bus for 90 minutes, getting men behind the ball at every opportunity and threatening only on the counter-attack.

In Drogba and Anelka's absence it was left to Joel Griffiths and Song Yan to lead the line for the Chinese outfit against an unfamiliar Reds defence.

Rio Ferdinand started at its heart, with Michael Carrick, more accustomed to a midfield role, alongside him. Frederic Veseli and Robbie Brady patrolled the flanks, just as they did in United's pre-season opener in Durban last week.

Yan had the first shot of the game when he was afforded space to shoot from 20 yards. But it was a tame effort, easily fielded by Anders Lindegaard.

Sir Alex handed summer signing Nick Powell his first start in a United shirt but it was a debut that got off to a bad start when he was caught by a nasty studs-up challenge by Shouting Wang.

Thankfully the 18-year-old was able to continue, although there was more disappointment for Powell on 23 minutes when he dragged the ball wide after he'd sprung the offside trap and latched onto a clever lofted pass by Davide Petrucci.

It was the only clear-cut chance United fashioned in a first half that almost ended disastrously when Lindegaard was forced into a fine save to deny Griffiths just before the break.

It's perhaps unrealistic to expect too much from a squad cobbled together from those first-team and Reserves players not resting from major tournaments, competing in the Olympics or currently injured. And pre-season, remember, is predominantly about gaining match fitness.

Nevertheless, Sir Alex will have been disappointed by the lack of entertainment and cutting-edge play in the final third. Only Petrucci and Kagawa provided any occasional sparks in the opening 45 minutes.

The young Italian didn't re-emerge after the interval, though. He was one of three players (Powell and Lindegaard the others) who made way for Bebe, Ryan Tunnicliffe and goakeeper Sam Johnstone.

Kagawa then saw a shot blocked, Anderson rifled a shot just wide and Shouting Wang's effort looped just over the bar at the other end as the second period began more positively.

Macheda forced a smart save from Shanghai goalkeeper Qui just before the hour mark after a surging run and slide-rule pass from Shinji Kagawa sliced open the Shenhua defence.

Just as he did in Cape Town, the Japanese international operated in the hole behind the centre-forward, moving between the lines and, where possible, making direct runs at the opposition.

One of those led to a shot on target that Qui smothered down to his left before Bebe tested the Shanghai custodian twice in as many minutes from distance.

The pair then combined for United's opener, Bebe beating his full-back before showing good vision to cut the ball back to Kagawa on the penalty spot. His first touch wasn't true, but he made no mistake with the second, hammering the bouncing ball into the net.

Paul Scholes' introduction drew almost as many cheers as Kagawa's goal. Had his downward header, minutes later, bounced into the roof of the net instead of over the bar Shanghai Stadium may have erupted.

The star of the second half, however, was undoubtedly Bebe. United's hero in Cape Town, he caused havoc down the left wing and one shot, a rocket from distance that swerved wickedly at the last moment, may have broken the net but for Qui's intervention.

In the end, Kagawa's strike was enough to settle the contest and send 42,725 fans home happy.