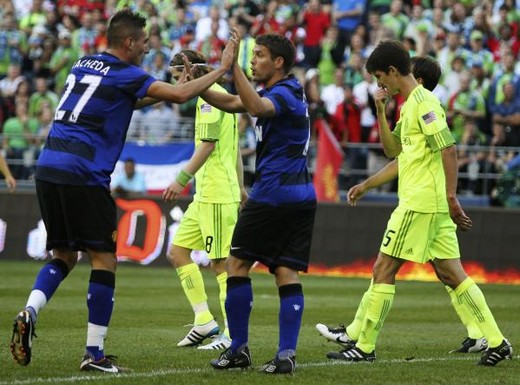 None of Sir Alex’s men will be sleepless in Seattle this evening, as United were forced to work hard on an energy-sapping pitch to procure a 7-0 victory in the Reds’ second US Tour clash.

The scoreline suggests a stroll in the park, but for the first 45 minutes the sides were evenly matched for long periods. Then, an explosion of second-half goals – including three in four minutes – put the game way out of sight.

Fitness is always the main aim during pre-season, although Sir Alex will certainly be pleased with the Reds’ performance and composure in front of goal during an entertaining game played before a packed and passionate CenturyLink Field.

Streamers cascaded down from the stands as the referee signalled for the game to begin and it was the home side who almost provided the fireworks in the opening minutes as fans’ favourite Freddy Montero twice attempted to chip Anders Lindegaard.

Unusually for a United game in pre-season, the crowd wanted the opposition to win; Seattle is the biggest “soccer city” in America and the Sounders the best supported side.

So they were disappointed when United took the lead, 15 minutes into the match. Ashley Young fed Patrice Evra on the overlap down the left and the defender whipped in a pinpoint cross for Michael Owen to nod home from close range. It was the striker’s second goal in as many tour games.

That signalled the start of a period of Reds dominance: Young forced a fine save from veteran goalkeeper Kasey Keller, Owen had an effort cleared off the line and Macheda, who looked particularly sharp up front, saw a header fly just past the right-hand upright.

Before half-time Montero and right-back James Riley both tested Lindegaard in the space of a few seconds but the Danish goalkeeper made two smart stops to preserve the Reds’ advantage.

Owen should have doubled the lead on 43 minutes when he went one-on-one with Keller but shot into the stopper’s legs – Michael then had the misfortune of inadvertently clearing Nani’s effort off the Sounders’ line from the resulting corner.

Sir Alex made four changes at the break and within six minutes of the restart two of those were on the scoresheet. First, Mame Biram Diouf latched onto Nani’s chipped ball before rounding substitute goalkeeper Terry Boss and firing home from a tight angle.

Then Wayne Rooney blasted into the roof of the net from eight yards after Nani had done well down the right and pulled the ball back to the waiting striker.

It wasn’t all one-way traffic, though: Ben Amos, on for Lindegaard, made a flying save to deny Mike Fucito and Pat Noonan clipped the bar with a volley as Seattle continued to push forward in search of goals.

That left space at the back, which Rooney exploited on 69 minutes when he found time to control and fire, left-footed, into the far corner. Park did the same two minutes later, arriving at the back post to slot home unmarked for United’s fifth before Rooney swept home Obertan’s cross to complete a quickfire hat-trick.

The Frenchman then wrapped up the scoring himself when he burst clear and finished neatly past Boss to notch United's seventh unanswered goal. Seattle residents won’t forget this game in a hurry.