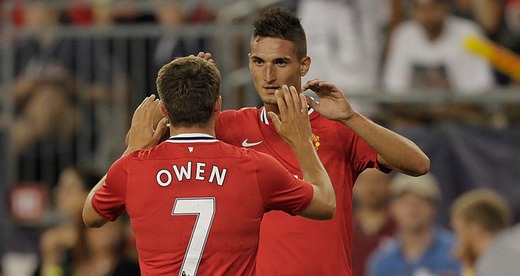 Federico Macheda bagged a brace as Manchester United opened their pre-season tour of the United States with a 4-1 win over the New England Revolution.

The Italian stated his case for a more involved role next season with a starring role in a match that marked the debut of Ashley Young.

The first half ended goalless with Wayne Rooney missing the best chance, heading over on 18 minutes before he was replaced at the interval.

Michael Owen broke the deadlock on 51 minutes with a low shot from Michael Carrick's pass and the midfielder played a one-two with Macheda three minutes later to get the 19-year-old off the mark.

The MLS side pulled one back on 56 when Benny Feilhaber's free-kick deflected in off Kenny Mansally but five minutes later Macheda converted a Rafael cross to restore the two-goal cushion.

Park Ji-sung sealed the win nine minutes from time with a delightful chip after good work from Gabriel Obertan and Ryan Giggs.