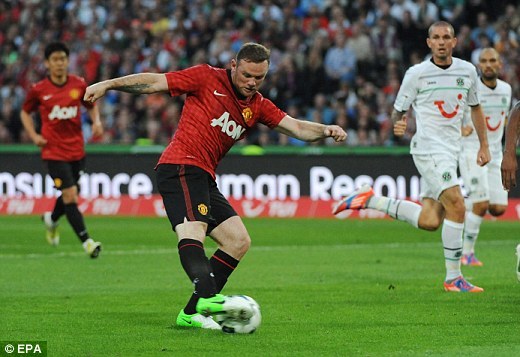 After the famine, the feast. United's 2012 DHL Tour ended in a dramatic victory over Hannover 96 as the Reds recovered from a 3-1 deficit to edge a seven-goal thriller and win the Chevrolet Cup in Germany.

However, Wayne Rooney cracked in a superb free-kick and converted a penalty, before teeing up Shinji Kagawa to fire in a neatly-worked winner with five minutes remaining. After four goals in total across the Reds' opening five tour games, seven had been scored in a breathless pre-season contest which featured some delightful attacking interplay from both sides.

After a low-key opening 10 minutes, United grasped control of an increasingly entertaining first half, and should have moved ahead after 13 minutes when Rooney's deflected pass released Nani, and the Portuguese's fizzed cross was missed entirely by Hernandez.

After Nemanja Vidic had volleyed over from Ashley Young's flick-on, the Mexican missed another presentable chance when Shinji Kagawa centred into a packed six-yard box. Though Chicharito initially lost his balance and missed the ball, he managed to squeeze a shot towards goal from a grounded position, only to see the ball deflect away off a heroic block from Christopher Avevor.

United's dominance seemed certain to yield the opening goal, but another chance went begging when Zieler closed down Nani's shot, only for defender Michael Keane to skew the ball off target with the goal gaping.

A minute later, Hannover punished United's profligacy as Jan Schlaudraff's shot was spilled by Anders Lindegaard, allowing Sobiech to nip in and lift a neat finish over the scrambling Dane.

The Polish striker narrowly failed to convert another close-range opening two minutes later, pressured well by Patrice Evra, but the hosts' time in the ascendancy was short-lived as United drew level just after the half-hour.

Evra surged down the left flank and released Nani, whose pull-back fell neatly for Rooney. The striker's swept shot was parried away by former United goalkeeper Ron-Robert Zieler, but only as far as Chicharito, four yards out, who used a neat touch to control and a simple tap-in to draw the Reds level.

The visitors might have been in front by the interval, but Nani blazed over after a neat free-kick routine, Cleverley fired straight at Zieler after clever approach work and Kagawa had a pair of shots blocked by the alert Avevor.

However, Hannover's dormant threat briefly emerged when Lindegaard plunged to sharply save from Konstantin Rausch, and the Bundesliga side forged ahead for a second time shortly after the commencement of the second half.

David De Gea and Ryan Giggs were introduced at the expense of Lindegaard and Young during the interval, and the former's first involvement was to punch clear a corner. With play ongoing, the ball was lifted back into the area and Karim Haggui rose highest to thump home a header.

The Tunisian international was one of eight substitutes brought on by the hosts and another, Didier Ya Konen, twice brought sharp saves from De Gea after the interval. United might have levelled when Rooney released Chicharito, but Zieler did brilliantly to fend away the Mexican's effort with his right foot.

United's chances of taking a positive result were dealt a blow shortly after the hour when Hannover established a two-goal lead with a simple, yet impishly-taken goal. Lars Stindl clipped a cross into the six-yard box and Mohammed Abdellaoue opted to line up an outrageous back-heel flick which nestled inside De Gea's post.

The Reds' riposte was swift. Nani's surging run was clumsily halted, 25 yards from goal, giving Rooney the perfect opportunity to whip a wonderful free-kick over the Hannover wall and inside the static Zieler's post.

Both Anderson and Antonio Valencia were introduced in place of Vidic and Chicharito, and the Brazilian midfielder threaded a neat through-ball to tee up United's leveller. Rooney latched onto the pass, rounded Zieler and tumbled after contact from the former United stopper.

Despite missing a spot-kick against Barcelona earlier this week, the England striker confidently sent Zieler the wrong way from 12 yards - and United weren't done there. With growing zip and dander about their play, the visitors incredibly moved ahead with six minutes remaining.

Nani's clipped diagonal cross found Rooney behind the Hannover defence, and his alert downward header gave Kagawa an opening - albeit at a diminishing angle - and the Japanese play-maker drilled a right-footed effort across Zieler and into the far corner.

Nani almost notched a fifth goal when a clearance thudded against his shoulder and dribbled wide, then he chipped wide of Zieler's goal after being put clean through, but a happy ending to the DHL tour had already been assured.