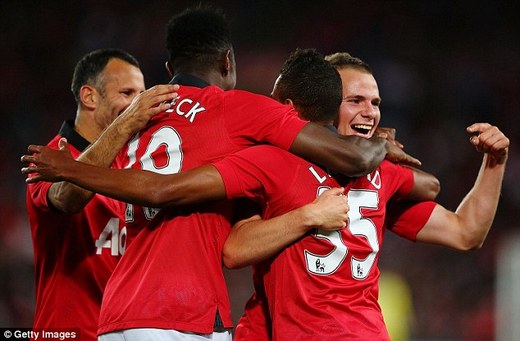 That’s more like it.
Following a shock 1-0 defeat in Bangkok seven days earlier (admittedly in sticky, stifling conditions), Manchester United registered the first win under new manager David Moyes with a sparkling 5-1 victory against the Foxtel A-League All Stars in Sydney.
Jesse Lingard and Danny Welbeck produced brilliant performances and both bagged braces, while Robin van Persie, on as a second-half substitute, added the icing to the cake in the closing minutes.
Unlike many pre-season friendlies, this fixture was full of action and, for much of the 90 minutes, played at a pulsating pace.
A colossal 83,127 fans packed into the ANZ Stadium and were treated to a host of early chances. Phil Jones headed straight at Ante Covic after just six minutes before Giggs and Lingard combined well to create a chance for Danny Welbeck a minute later. The young striker, who’d been challenged by David Moyes to “add more goals to his game” this season, struck the ball sweetly but Covic saved well. 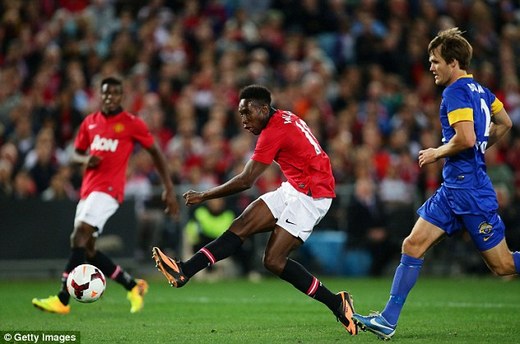 Four minutes later, Welbeck played a crucial role in the Reds’ opener, cleverly stepping over a pass to release Lingard. The 20-year-old kept his head and finished calmly to net the first goal of David Moyes’ reign.
United should have been 2-0 up shortly afterwards when Patrice Evra headed over from almost underneath the crossbar, although Anders Lindegaard had to be at his best to prevent Pedj Bojic levelling scores at the other end.
By that point, the Reds were playing with the shackles off and the game’s second goal was a joy to behold. A neat exchange of passes between Welbeck, Lingard and Giggs on the edge of the penalty area freed Welbeck, who slotted home past Covic to double United’s advantage.
It was classic pass-and-move football and a reminder, if fans needed it, of the exciting mix of youth and experience David Moyes has inherited.
That combination was in full effect again just before the break, when Welbeck sold his marker a dummy and spun off him to collect Evra’s cushioned return pass. Danny’s shot beat Covic in the All Stars goal but trickled agonisingly past the far post.
Michael Keane replaced Rio Ferdinand at the break and almost added a third goal inside five minutes of the restart when he headed over from a corner after Welbeck had again gone close.
It was the home side that found the net next, though, Besart Berisha sneaking a low shot through Keane’s legs and inside Lindegaard’s right-hand post to make it 2-1. 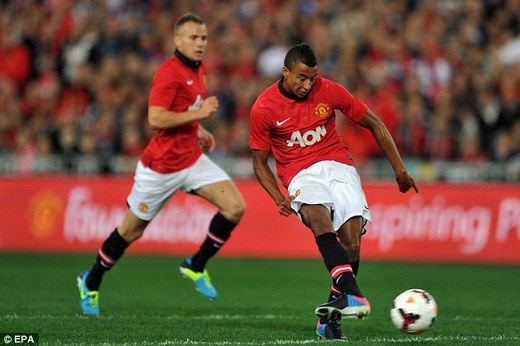 Three minutes later, United’s two-goal cushion was restored courtesy of a cracking finish from Jesse Lingard. The Warrington-born forward, finding himself near the corner of the penalty area, shaped to pass to Evra on the overlap but instead jinked inside and rifled a shot into the far corner.
That prompted Moyes to send on Robin van Persie – much to the crowd’s delight – but it was Welbeck who was in the thick of the action again, rounding substitute goalkeeper Michael Theo only to see his shot cleared off the line. 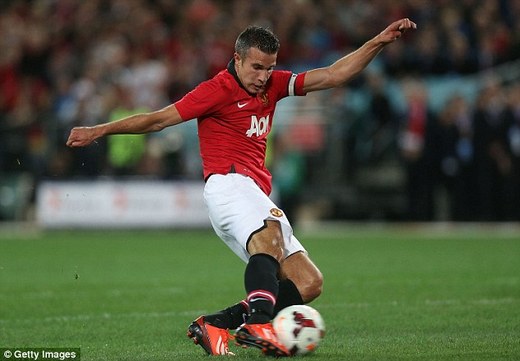 Never mind, though: from the resulting van Persie corner Welbeck rose high to glance home and bag his second of the night.
Zaha could have added another but it was left to van Persie to complete the scoring, driving home a low right-footed effort after Theo had done well to smother his initial effort.
Adnan Januzaj, the star of United’s pre-season opener in Bangkok, should have made it 6-1 in injury time but there were few complaints from the capacity crowd. After all, they’d already been treated to a terrific display of attacking football from the English Premier League champions.
Granted it was only a pre-season friendly, but United, now up and running in 2013/14, looked a formidable force.
United: Lindegaard; Rafael, Ferdinand (M Keane 46), Jones, Evra (Fabio 76); Zaha, Carrick (Anderson 71), Cleverley, Lingard; Giggs (van Persie 62), Welbeck (Januzaj 71)
A-League: Covic (Theo 46); Beauchamp (Chapman 84), Boogard, Topor-Stanley, Rose (Bridge 62); McGlinchey (Grant 62), Miller (Celski 46), Bojic (Risdon 46), Emerton (Currusca 84), Broich (Williams 73); Berisha (Ifill 73)